The search for a ‘peaceful journey’

Last summer camping by the Imnaha River, I had a dream. 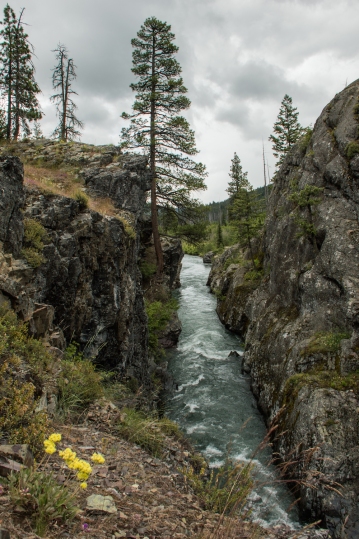 the Imnaha at Blue Hole

By Tamara Enz
It was August, but on the river in the bottom of a forested canyon and at elevation in the Wallowa Mountains, it was cold. I slept in the bed of the pickup, curled into my down sleeping bag, with multiple layers of clothing, and a hat. I don’t remember much about the dream except that it terrified me and I awoke as I was about to be decapitated.

Startled awake with the sound of water rushing downstream to join the Snake River, the trees crowding in above me, and the stars brilliantly clear in the gaps between the branches far above, I wondered what had occurred on this site. I lay awake a long time thinking about the dream and whatever energy I had tapped into.

As happens, the year waned. The dream, all but forgotten, left my conscious memory.

A few weeks ago, I was camping by the Imnaha. I had a dream. It was June, but in the river bottom, in an open ponderosa pine park and in the spring rain at elevation in the Wallowa Mountains, it was cold. I was a few miles above the previous campsite; I slept in the camper in the bed of the pickup. My cat was with me. I don’t remember much about the dream except that it terrified me and I awoke when every hair on the back of my neck and head were standing on end, both in the dream and not.

Jolted awake by the dream, I heard the river and the rain on the roof of the camper, I had the sense that I was in the wrong place. Lying awake, I remembered last year’s dream.

The Imnaha was home to the Niimíipu, the Nez Perce. These were the last grazing lands of Chief Joseph’s band. They lived in these canyons, in the mountains, and on the grassy slopes. They grazed their horses and lived their lives here, on a shrinking allotment of land “given” to them by the U.S. government in this far-flung corner of Oregon and then slowly taken away again as white settlers discovered its value. There were promises and skirmishes, then Chief Joseph fled with other Nez Perce who would not agree to forced relocation to a reservation.

Many of us have heard some piece of this story. Pursued by numerous factions of the U.S. military, they crossed the Snake River, the mountains of Idaho, and The Big Hole in Montana. They wove their way through Yellowstone, the Sunshine Valley, the Absaroka Mountains, and north again to the Bear Paw Mountains of central Montana. Finally, after 1,170 miles and multiple battles, they surrendered. They were 40 miles from the Canadian border. They were relocated to Kansas, and Chief Joseph was never allowed to return to the Imnaha.

I don’t claim to have any connections to the past, no clairvoyance; I don’t channel spirits. But I believe the land remembers a lot of things we choose to forget. There was peace and there was some type of balance. Then, there was not. Everything has energy; we all come from entropy, take shape, and then return to entropy. Blood that soaks into the soil, flesh and bone scattered by scavengers and decay doesn’t cease to exist; rather, it takes a new form.

Maybe the dreams were just dreams, my subconscious pushing me into places I don’t want to go or reminding me of things I have not fully processed. Despite the terror that woke me, I don’t think the violence was directed at me. I think it was a reminder.

The river, the forest, and people, both Native American and, at this point, of European descent too, have flowed through this place for generations. Today we often camp in remote places and feel some sense that we have discovered them for the first time, no matter the fire ring, the litter, or the road. We read the roadside signs about what was, who was, and when it was. We snap a photo. We move on.

We forget there were others in this place long before any of us discovered it. Not just people passing through on a summer trip but those who lived and died here, sometimes violently, sometimes unjustly.

The next night before going to sleep, I smudged the camper, the truck, and myself, burning sage as an offering to the people who came before us and in their memory. Water, trees, people will continue to flow through this land. May it be a more peaceful journey for us all.

Formally trained in Japanese, biology, and culinary arts, Tamara Enz has been better schooled by life. Photos by the author.