Writers of slender acquaintance: Rhian Who…?

“It is therefore only right that we should all turn out to make our farewells.” – Rhian Roberts 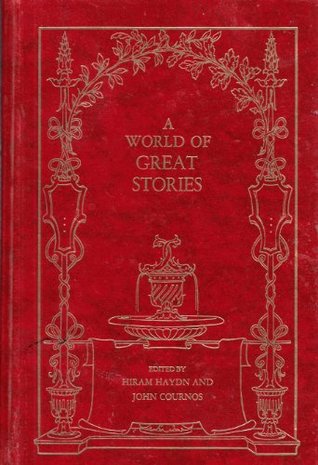 I haven’t mentioned my reading in the last couple of essays. That isn’t because I haven’t been reading (don’t be silly), but because I’m dividing my time between a couple of works. One of these is a crime fiction novel by an author I have reviewed before, William Mark (my review of his latest, Crossing the Blue Line, will appear sometime next week.

The other, whose cover is pictured at right, is called A World of Great Stories and contains 115 “stories” (more on why the quotation marks used shortly) by authors from around the world. So far I’ve finished the American/British section (which includes not just the U.S. and England but Wales, Scotland, Ireland, Canada, Australia, and New Zealand) and am into the section on Europe which starts, quite naturally, with the French who are after all right across the Channel.

The Welsh representative is the Rhian of this essay’s title. Her name is Rhian Roberts and if there were ever a writer with whom one’s acquaintance is going to be slender, it would be she.

But more on Ms. Roberts anon. First, a few words about this book.

The edition I am reading, one of those “deluxe” editions that the big chain bookstores sold during their hey day came to me via my wife Lea who bought it during her mall employee days back in the early ’80’s. It’s a leather bound volume with a nice heft – just the sort of book to go with a big, comfy chair and a nice drink.

I have now described its positive qualities.

This compilation was first published in 1948, and I can’t tell that in the 30+ years between its initial publication and my wife’s purchase of the above mentioned deluxe edition that anything in the way of re-editing or reconsideration was done to the text. The focus of the “stories” (there I go again) in this work is 20th century fiction, specifically the short story. In fact, the editor of the American/British section, John Cournos, goes on at some length in his introduction about the importance of the short story as a form and how American magazines have been driving forces in (re)vitalizing the short story form. Then, in the introduction to the European section, editor Joseph Remenyi argues that all the best Euro writers are French and that they don’t do short stories. Of the five “stories” I’ve read so far in the French group, four have been novel excerpts by the likes of Anatole France and Marcel Proust, neither of whom could write something short if a gun were held to his head. Now you know why  I’ve been putting that word stories in quotation marks.

Now, let’s get back to Welsh author Rhian Roberts. I have written about Welsh literature before, and on that occasion some scholars in the field were kind enough to give me pointers where I might find out more about the Welsh versions of Arthurian legends. The story included in A World of Great Stories by Roberts, “Keep Up Appearances,” is an interesting, comically ironic example of working class realism. It interested me enough to make me want to learn more about Roberts – and read more of her work.

Alas, searches on both Google and Google Scholar turned up almost nothing about Rhian Roberts. The brief introduction to her story in the compilation tells the reader that she was first published at age 14 and that she wrote and published several stories between terms at the University of London of which “Keep Up Appearances” was one. Beyond that, all I have found is the following:

Nor is Rhian Roberts listed among Welsh women authors at Wikipedia. After a brief period of serious writing in the 1940’s, she seems to have disappeared, perhaps into an unrelated career. I could not find a photograph of her, hence the use of the book cover as the visual for this essay.

So Rhian Roberts truly is a writer of slender acquaintance. While she is certainly a minor figure compared to the first two writers in this series, Anderson and Kipling, she is a talented writer and I’d like to find out more about her and read more of her work. I hoped to post a link to one of the two stories I have mentioned, but, alas….

One final observation – Rhian Roberts is an excellent example of the fragility of the artist’s life and reputation. Like the listener to the Mariner’s tale in Coleridge’s masterpiece, her story of success and then seeming oblivion can only make us sadder but wiser, perhaps.