What does Brexit mean for the Premier League? 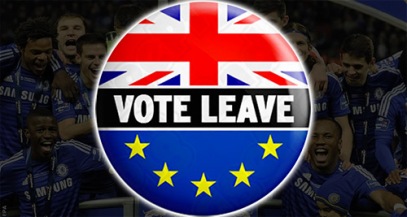 On the sports side of things, we have this headline this morning:

The world’s most prestigious football league might be unwilling to speculate, but I’m not. England’s vote to leave the European Union has many uncertain about what it means for the Prem, but nobody sees it as a good thing. Lots of uncertainty. Lots of breath-holding. And for some, probably a good bit of prayer.

From where I sit, Brexit looks to be an unmitigated disaster for the Premier League. I think there are two issues to consider.

1: Brexit likely means the end of the immigration accord that has made it simple for non-English players to work in the country. ESPNFC observes (and pardon me for quoting this extensively):

On Thursday, the UK public voted 51.9 percent to 48.1 percent in favour of withdrawing from the EU, which means players from other countries within the Union might not have an automatic right to play in England once the so-called “Brexit” is complete.

All countries within the EU sign up to the free movement of labour, which extends to players and coaches. There is no guarantee, however, that this will continue be the case in a few years when the UK has split.

With immigration concerns one of the major reasons behind the vote to leave the EU, the UK could possibly try to broker a trade agreement that does not include the free movement of people.

If that is the case, then the 432 European players registered to play in the Premier League last season, a number reported by Sky Sports, would need work permits.

And a study by the BBC asserted that more than 100 Premier League players, and a total of 332 when including the Championship and Scottish Premiership, would be ineligible for a work permit under the current regulations.

Cesc Fabergas joined Arsenal from Barcelona at the age of 16, which might no longer be possible after the ‘Brexit.’

Equally as concerning for clubs would be the regulation governing the registration of youth players.

FIFA rules state that players under the age of 18 cannot be transferred across borders. However, there is an exception within the European Union, which reduces the age to 16, as it is against EU statutes to restrict the movement of people aged 16-18.

2: The other troubling issue is that Brexit may well kneecap the considerable financial advantage the Premier League enjoys over the world’s other top leagues. To put it colloquially, Brexit is a flying studs-up tackle to the balls of the economic markets. Per PoundSterlingLive:

The pound fell to its lowest level in 30 years after the electorate defied what was clearly a misguided market which were only 24 hours earlier attributing a 90% chance to Remain winning the vote.

The pound will perhaps recover, but how much? And how soon? What happens if, in the wake of England’s collective economic death wish, Scotland revisits independence? What if Northern Ireland and Wales join them? Such moves would likely further erode the economic health of England (upon which the Prem’s affluence is built).

These issues are, of course, related. Unlike the utterly socialist structure of US pro sports leagues (the draft, salary caps, all in service to the enthusiastic pursuit of parity), world football leagues are pure free market. The richest teams can afford the best players, and while upsets occur (witness this season’s unprecedented championship run by Leicester, an archetypal small club), they are exceptionally rare. As Simon Kuper and Stefan Szymanski illustrate in Soccernomics, the single most important variable in determining a club’s success is player salaries. In other words, “worst to first” is a uniquely American phenomenon.

In this context, financial heft and free movement of talent are the most important elements in a club’s drive to success. Now, overnight, both are threatened – nay, menaced at knifepoint.

As I explained last year, the Premier League’s recently signed television deals represent a dire challenge to Europe’s other top leagues – Spain, Germany, and Italy, primarily, and also France (mainly PSG, yes, but still). How dire? Well, at that point I had come to accept that the Super League concept, which has been kicked around without much progress forever, was about to become an inevitability.

If you’re a big club, the SuperLiga perhaps begins to make a lot of sense. You cannot compete against England in the current atmosphere, and the Premier League’s strength is going to continue eroding both your club and the domestic league in which you play, with the result being that in time you’re going to be merely the best minor league team in your country.

Whether you like it or not, though, the likelihood of a Euro Super League grows by the day. If you’re Real Madrid, the prospect of second-class citizenship is simply not to be entertained, period. Same for Juve, Milan, Inter, Bayern, Barca and PSG. If you’re in that next tier of clubs, you’d leap at the opportunity to be included in something as lucrative as the Super League. If you’re smaller than that, well, too bad.

Big money waits for no one and respects nothing but the balance sheet. Given the logic of modern society, it’s hard to imagine that the prospective members of the Euro SuperLiga see any choice.

That was before I heard the term “Brexit,” though.

If I’m a director at one of the aforementioned continental powers, the news today is a mixed bag. On the one hand, if I’m a director markets crashing is probably hard on the wallet. On the other, I’m looking at the financial and immigration implications of Brexit and, for the first time in a good while, I’m seeing a ray of hope.

Yes, those TV deals still represent big leverage and I’m still going to have trouble outbidding United, City, and Chelsea for the world’s top players. But if the pound doesn’t recover, the giants are going to have less budget, at least, and it also means that the league’s smaller players are going to find themselves less awash in cash than they thought they were this time yesterday.

Additionally, the financial considerations don’t matter on the personnel side if a player I covet can’t get into England at all. This is true at the senior team level, and it could wreak utter havoc on a club;s ability to operate a youth academy (which is financial lifeblood of sides like West Ham and Everton).

But if the UK’s new trade agreement with the EU does not include free movement of players, it is almost certain that English clubs would not be allowed to sign these players before the age of 18. But the likes of Barcelona, Bayern Munich, Juventus and Real Madrid would be able to carry on as usual within the EU.

On the positive side, many England supporters have long complained that the dominance of foreign players was bad for the nation’s football prospects because it deprived native talent the opportunity to develop. So if you’re an English footballer who isn’t quite good enough to make a top side, Brexit might prove to be great news for you personally.

In the end Brexit may turn out to be a good thing, both for the British economy and the Premier League. Too soon to tell. What I can promise you, though, is that a lot of top English football execs didn’t sleep well last night, and they may not sleep all tonight.