To reduce gun violence, make gun owners and sellers liable for violence committed with their guns 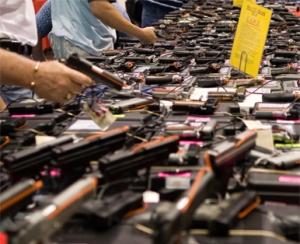 Let me start this post with an admission. If I had the power, I’d happily ban assault weapons completely. I’d also round up the majority of assault-style weapons presently in circulation and destroy them, along with any magazine larger than about five rounds (if you need more than that for hunting, you’re doing it wrong). I think they’re disgusting and useful for only one thing – killing other human beings – and that every argument in favor of owning assault-style weapons (they’re safer, they’re lighter, and they’re great for varmint hunting are a few of the ones I’ve seen offered since Orlando) is bullshit. The fact that AR-15 style weapons were renamed “modern sport rifles” specifically to circumvent the original assault weapon ban tells me that even the gun makers know that they’re selling assault weapons, not hunting rifles. I’ll probably vote to support a ban in the future, and this is one of the many issues on which I grade candidates when I vote. I suspect that many folks reading this are probably very happy that I don’t have this power.

However, I recognize that a ban may not be politically feasible at this time, and even a ban won’t fix everything. Gun crimes, even mass shootings, would still occur- the murderers would simply buy their weapons from the black market or steal them. But there is something that would help reduce the number of deaths due to guns overall, not just gun crimes. Suicides, accidental discharges, and crimes all would be reduced by what I’m about to propose:

For gun sellers, increased criminal liability means that if they sell a weapon to someone who later goes out and commits a crime with that gun, the seller may be fined or jailed, depending on the level of the seller’s liability as determined by a court of law. Other examples include failure to conduct a proper background check, failure to secure the weapons properly (so they’re difficult to steal), selling guns to felons, a history of disregarding the rules and regulations, selling a weapon to a minor, and failure to ensure that the purchaser has a minimum level of training on how to safely use, handle, and store the weapon. I’m sure there are other actions that a gun seller could do that would make them liable, just as I’m sure that there are plenty of details in these few examples that would need to be worked out over the course of writing gun liability legislation. But the idea would be to punish those gun sellers who are either unable or unwilling to take the minimum steps necessary to ensure that the weapons they’re selling are used properly.

As for gun owners, they could be liable in a number of ways. Failure to take safety courses on use, handling, and storage would indicate liability. Failure to store a gun properly (in a safe, trigger disabled, unloaded, and/or ammunition separate from the gun, for example) would too. Make parents and guardians liable for any actions committed by a minor in their charge. Shooting another hunter while out hunting would get upgraded from sometimes being an accident to always being a crime. Transporting a loaded weapon in your vehicle. Carrying a concealed weapon without a valid permit for it. Basically, accidental discharges would be criminal offenses. Suicides because a handgun wasn’t locked up would make the gun owner criminally liable for the suicide, not as a murderer but maybe as an accessory to manslaughter. Crimes committed by a stolen gun would earn the former owner stiff fines and/or jail time, and so on. And as with gun sellers, I’m sure that there are both devils in the details and additional ways that guns can be misused or mishandled.

Along with these new penalties would come ways to reduce or eliminate legal liability. For gun sellers, securing your inventory with alarms and locked cabinets/cases might reduce their liability. So would running background checks on every customer, all the time, with waiting periods of a day or even a few hours from purchase to taking possession to give a suicidal buyer a chance to make it through their crisis safely. For gun owners, voluntary registration of the gun could reduces some liability. Take more gun safety classes than the minimum, lower your liability. Secure your guns properly and get a certificate of compliance from the police or sheriff, reduce your liability. Report stolen guns promptly, even if you didn’t store your guns securely, and at least you’ll reduce your liability (and if they stole the whole gun safe, you’re probably in the clear). And so on.

I have no illusions that this suggestion would be easy to implement given all the details and competing interests that would want a say. And it’ll be difficult to tell a grieving parent that they’re being charged with a crime for failure to secure the handgun with which that their depressed teenager just committed suicide. But if our goal is to reduce not just mass shootings, but gun violence in all forms, boosting the consequences for failing to control the many guns in our society is a good first step.

I might even go so far as to say that, if you can’t support this kind of legislation, you’re probably not a responsible gun owner.