Sometimes a gun is just a gun 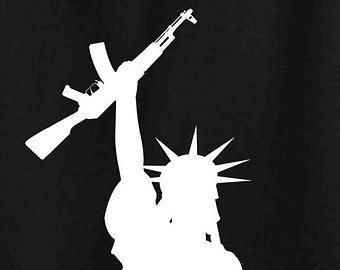 Just because you’re paranoid, don’t mean they’re not after you. – Kurt Cobain

Did you know that in Russia it is legal to own a handgun but not a rifle? If you are a gangster and you want to shoot someone at point blank range, to rob them or to exact revenge or to terrorize their fellow citizens, the government has no problem with that. It’s the medium to long range shooting that falls under regulation. As it happens, rifles are necessary to overthrow a government.

We the people are mourning the loss of 49 of our brothers and sisters. We should never lose sight of that. The fact that the Orlando Massacre was a targeted attack against the most cohesive and politically active minority in our nation, we should not lose sight of that either. Nor should we lose sight of the method of attack, terrorism, which can be carried out by bombing, poisoning (Anthrax), lynching, or a hundred other methods.

This is probably the hardest thing I’ve ever had to write. I must beg you, during the raging maelstrom of your grief, to consider the conservative point of view. Please, forgive me, I weep with you for the innocents slain. I don’t want to do this, but I’m afraid of what will happen if we give Hillary or Trump or their successors the power to take away our rifles.

The American Republic was bought with bloodshed. We all know it. We were temporarily the rebels overthrowing the empire. That became possible because we had the ability to manufacture guns, which our (British) government was unable to regulate. The Minute Men were just farmers, merchants, students, and literally every able bodied male. Our unregulated access to firearms made all the difference in the fight against tyranny.

We remain a peaceful nation, free, forging alliances according to the natural rules of mutual benefit, and ruled by a government that is just and ready to answer to the governed. This is as it should be. It is also unique. The only comparable governments are ruled or once ruled by the British Crown, or modeled after our own, like Germany, Japan, and Israel.

Our government is fundamentally different than any of those governments. They are all designed to be functionaries of a larger government, a higher power if you will. Even our mother England functions on the premise that the power of God, channeled through the monarchy, will open the legislature, and oversee the necessities beyond the faulty capacity of elected leaders.

Guns are our responsibility. We took them up. We used them justly. We are the Marshall. When a new gunslinger rides into town, we take him down. This is our role. It’s a dirty job, but somebody has to do it. And one unalterable element of this responsibility is holding our own government accountable. We are still the Minute Men, although now we’re programmers, engineers, salesmen, and literally every man and women, physical handicaps be damned.

I like to think of it as a tandem bike. My brain is riding in the front seat, controlling the handlebars, exercising freedom of speech, freedom of religion, freedom of the press, and feeling the wind in my hair. How long is that going to last without someone in the back seat with a medium to long range weapon of high caliber? As soon as I say something the President doesn’t like, I’m a stain on the pavement.

An assault rifle is just a medium to long range weapon of high caliber. I don’t want terrorists to have them any more than you do. I do want our servicemembers, our former servicemembers, and every man or woman who can demonstrate proficiency to have one. It’s how we keep the government honest. The founding fathers knew this. If we surrender our rifles, we surrender our freedom. Doing it by slow degrees means preserving our own freedom by selling our children into slavery. I won’t do it. I can’t do it. And I can’t stand by and watch you do it without saying something.

There, I said it. As you were.