As part of our ArtsWeek festivities, we asked some of the staff to share their favorite photos with our readers. [Ed. Note: The intent here wasn’t to launch a mutual admiration society, but it sort of got that way in the end. There are some talented folks here and we’re each other’s biggest fans, for good or ill.]

The photo was taken by Orlando Valenzuela in Nicaragua in 1984 and the image is called “Miliciana de Waswalito.”

I bought a postcard of the image in Managua in January, 1988 after seeing it used on billboards and murals to encourage women to breastfeed. We were given an afternoon off from our seminars to go to the beach and on the way back we picked up hitchhikers. I shared my seat with a woman, her daughter, and infant son. I commented on how healthy he looked and she explained to me about breastfeeding. I still remember his warm weight in my lap, his big eyes, and his red booties. The woman asked me to take her daughter with me back to the US. I had to explain something that would make no sense: as a grad student I couldn’t even support myself, much less a child.

The photo is still in its cheap white plastic frame – what I could afford at the time. It has sat in every office and classroom that I have occupied – the only photo to be so prominent in my life. Sometimes students have asked if the photo is me. Sure, the 5’11” WASPy Yankee used to be a 5’2″ indigenous Nicaraguan.

It reminds me of the importance of hope, perseverance, and struggle. That change for the better is possible – even if the greater revolutions fail. On those days when I feel overwhelmed, overworked, or disappointed it reminds me to say, “Oh really? YOU have issues? Do something about it.”

Much has been written about Feininger’s stunning, iconic shot of America’s most famous highway. I could talk all day about the image’s technical qualities, but what really sets it apart is its place in America’s very mobile history.

In the 1930s the Dust Bowl forced more than 3.5 million people out of the Plains states, with many of them heading for California. This is the road they took – hundreds of thousands of them – and today millions of their descendants live in the Golden State. They came down this road, past this spot, and perhaps they stopped here to gas up their jalopies.

If you’ve lost all you’ve ever known and are being driven into exile by forces beyond your ability to fathom, let alone control, all you can possibly have is a small measure of hope. On a day like the one captured here, in Seligman, Arizona, the migrant might have momentarily been overwhelmed by the vast beauty of the landscape into which he or she was fleeing. Before them lay a vista full of promise, or perhaps simply relief, but it’s likely they’d all heard stories about the vibrant, fertile field of opportunity at the end of this long, desolate road.

Andreas Feininger, one of the greatest photographers who ever lived, stopped by the road and took a pretty picture. But he did more. He told a story of hope, of traveling west in search of fortune, or away from despair. It is perhaps the most American story it is possible to tell. 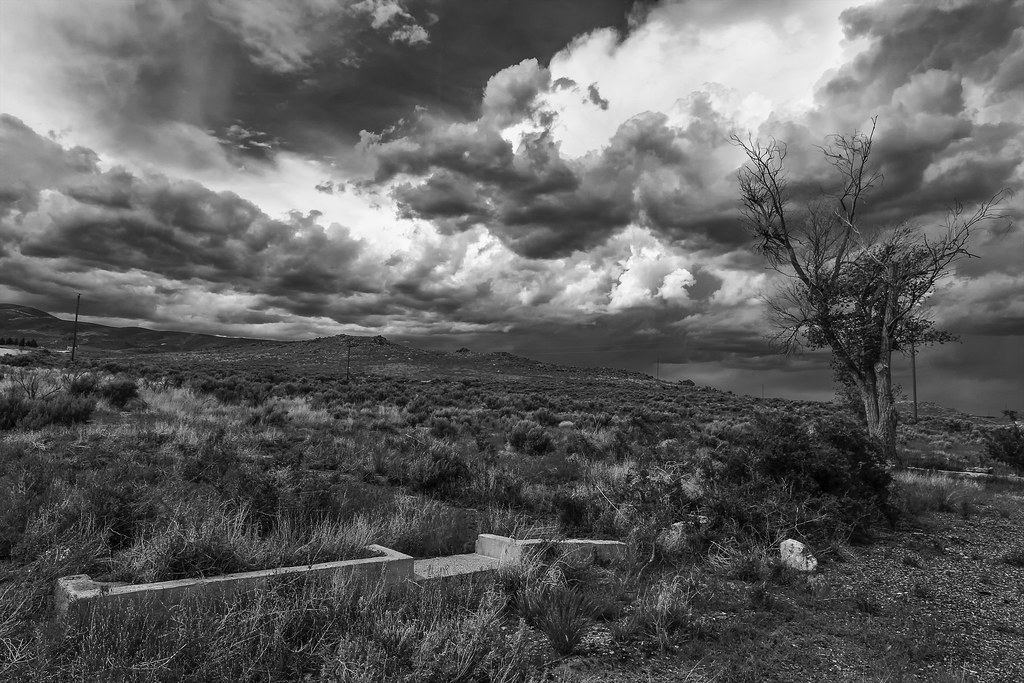 There are so many images for Denny from the old days. The mountains, the snow.

I’m pulled to his current stuff … especially last year’s drive into western US, with the truck and the multiple printed images on it … that kind of work.
The sun tunnels were also excellent.
But by personal temperament, I found myself really drawn to the house foundation in Contact, Nevada.
The overall dark treatment, the horizon flow from left downward to the right. The empty tree at the end of that. And the concrete foundation remnants in the foreground, that you seem to come to only after your eye has visited every other place in the photograph.
Those concrete forms signaled the end. Dreams. Family. Hope. In about as definite terms as could be used. It’s sad … devastating. But for an image of power and message, it really shines. 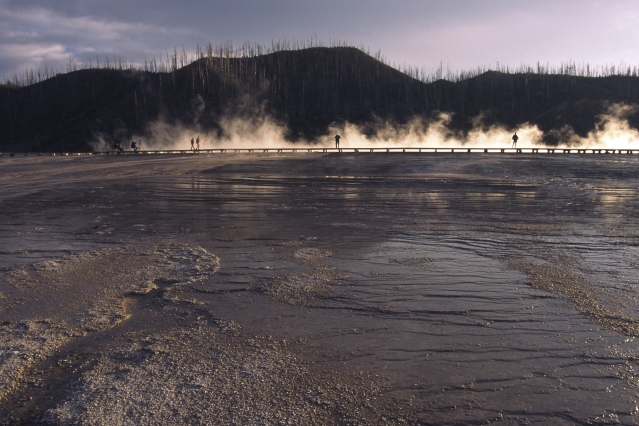 I’ve always paid attention to the photography of Greg Stene. That’s because he sees what others (including me) do not.

This image at Yellowstone always struck me. I stood in the same spot just a week ago as Greg did. I saw the geysers, I saw the walkway, I saw the people.

Greg saw them, too. But he captured something I did not see and did not capture. Such is the elegance of Greg’s view of the world.

People like Sam and I are starting over, and that shot stuck with me. It says so much about what kinds of images speak to people and I have learned that despite all our technical shenanigans and obsessions, in the end it is about emotion for a buyer.

We’d love to hear from our readers. What shots have stuck with you?