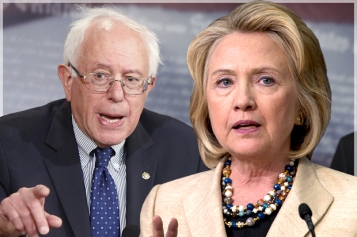 We’ve had two decades to get to know former First Lady, former Senator and former Secretary Clinton. We look at that history and we understand something you don’t: she isn’t one of us.

First, a caveat: this article is not about all Clinton voters. Many of you support her candidacy for reasons I don’t agree with, but you do so in good faith, and I can respect that. Instead, I’m addressing a narrow band of people who have badly overstepped themselves by advancing a line that is ill-informed, offensive and dangerously corrosive, to both their cause and mine. This is for them, in hopes that we can begin fostering more educated conversations based on fact and mutual respect.
_____

There’s an interesting new rhetorical wedge floating around in recent days. To wit: If you’re a Bernie Sanders supporter who’s unwilling to vote for Hillary Clinton if she secures the nomination, that’s privilege.

So, let’s make sure we fully understand the propostion:

Well, that’s one theory. Here’s another one.

Maybe you can dismiss Iraq, Syria and her unabashed fluffing of Israel – after all, you’re safe here in the American Empire.

Maybe you can forgive that an alleged liberal spent a couple decades in opposition to full equality for gays and lesbian, especially if you’re straight.

Maybe you’re not overly compelled by the TPP – the Asian version of NAFTA. Maybe you’re okay with the fact that she’s on the right side of Keystone now.

Maybe when it comes to corporate campaign donations you can rationalize that taking millions of dollars doesn’t necessarily make you beholden to the people paying the freight.

But from where I sit, there’s a term for all this: privilege.

You have granted yourself the freedom to rise above all this data, all this sheer evidence. As so many did with Obama before her, you have massaged yourself into the belief that what a person has done before has no predictive value for what he or she will do once elected. Because once she’s in office, she won’t have to play the game anymore – she can finally be who she has always secretly been.

Of course we don’t want President Trump (or Cruz, or Rubio, or Kasich, or Ryan), but you make a critical mistake in how you formulate the equation. You think: how can we possibly be so petty as to turn our backs on one of our own who, even though we don’t love her, is still a lot better than the alternative?

The problem is that we have had two decades to get to know former First Lady, former Senator and former Secretary Clinton. We look at that history and we understand something you don’t acknowledge: she isn’t one of us. She isn’t a liberal. She isn’t even vaguely progressive, at least not by the standards of the progressives we know. In pre-1980 terms, she’s a mainline establishment Republican. She isn’t on our side. She can be counted on to nominate a Supreme Court justice who will support reproductive rights, but … beyond that, what does her record suggest she can be trusted to do right?

We have a lot of Clinton supporters these days who present themselves as realists, and I love realism. But the way I see it, the first thing a would-be realist has to do is acknowledge reality.

I know a lot of folks see us Sanders supporters as a bunch of barking pixie-dust snorting moonbats. But the simple fact is that there are a lot of verifiable reasons, based in demonstrable fact, for opposing the candidacy of Hillary Clinton. And I suspect I’m not the only one who’s a little tired of having his intelligence insulted by those too privileged to acquaint themselves with the woman’s actual record.

I’m damned annoyed with you right now, but don’t think you’re a bad person. Odds are I’d probably really like you and we’d get on great. I understand why you feel the way you do. I think we all, over here in Moonbatland, have experienced plenty of ambivalence and have argued with ourselves, in good faith, over the points you make. I know I have. I also suspect that if Clinton is the nominee in November a lot of our number will hold our noses and vote for her because we remember Reagan and Bush and we look at Trump and Cruz and think hell, these nuts are actually worse.

But you don’t make that more likely when you accuse us of privilege. That’s more hypocrisy than I, for one, can bear.