“No man but a blockhead ever wrote, except for money.” – Dr. Samuel Johnson 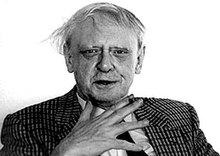 days ago, but I started another book and the introduction to that book has been rattling around in my head since I read it, so I think I’ll write about that. You may ask, what could deter this disciplined professorial writer of literary fiction from his appointed rounds?

Well, the guy to the right of this text can. I had picked up a copy of H.E. Bates’s A Month by the Lake and Other Stories in the New Directions edition. The introduction to Bates’s collection is by Anthony Burgess, a name known to most people in association with his most famous novel, the brilliant and nightmarish A Clockwork Orange. The theme of Burgess’s introduction, which is both a wonderful appreciation of Bates and a screed of sorts against the literary world, is worth, I think, some consideration.

In these few pages Burgess throws down a gauntlet that probably should get thrown down a lot in literary discussions. His appreciation of Bates, whom he ranks with others of “his generation of writers,” writers like E.M. Forster and Evelyn Waugh, focuses less on Bates’s similarities to those notables and more on the culture and shared idea of what a person of letters’ life should be. Burgess lumps himself and Bates into a category of writer who might best be described by the word prolific: he and Bates, he notes, are writers who write. These are guys who turn out many books, eventually find commercial success, and walk what has become a sort of boundary line between that stuff of dreams we know as literary fiction and stuff that sells many units because readers find it irresistibly entertaining. (Another writer, a sort of mentor figure to Bates, especially, would be Somerset Maugham, a writer who wrote much, enjoyed considerable commercial success, but remained always a bit of an outsider to the “truly literary” crowd.)

What makes Burgess’s essay fun is that he gores a number of sacred cows using a rationale that is in some ways spot on with the current cultural climate. Burgess rails against the “supported” class of writer, one who writes little and gets government grants which allow him (or her) to fritter away time in drunken cocktail party poseur behavior. Among those whom he skewers are some pretty important figures: James Joyce, Virginia Woolf, and T.S. Eliot. His argument is that while writers like he and Bates ground out myriad short stories, novels, and nonfiction works to make a living writing, characters like these (and their far less talented successors) wrote very little but drank and talked – a lot – supported by taxpayer dollars.

Burgess has no patience with this updated version of noble patronage and he says that one of his real pleasures was seeing H.E. Bates finally have a good bit of success in the 1960’s during the last 15 years before his death at 69 in 1974. What he notes then is something that is going to be the subject of considerable debate in the next decade, methinks; Burgess argues that he and Bates became the fine writers they are by working at their craft very hard, by taking their lumps in rejections, by eventually breaking through and getting published, and that their success came as a result of hard work and attention to improving their craft with each piece they wrote.

He also suggests that some writers (see list above) became mainly purveyors of gimmicks that attracted the attention of art snobs always anxious to promote that which they do not understand. Burgess argues that literature should be made for reading, not for having to be explained by so-called experts.

I’m not completely sold on what Burgess says. It seems to me that art needs experiments to evolve and grow. But art also needs to be understood – art is a conversation about the human condition and if all one can say about a work is “What in the hell does that mean?” there is no conversation going on.

So he has a point.