“A writer is someone for whom writing is more difficult than it is for other people.” – Thomas Mann 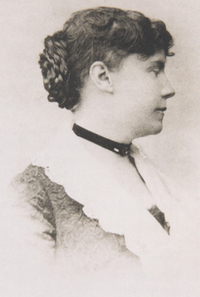 I’m about three-quarters of the way through Hilary Masters’ interesting novel Cooper, and so I don’t have a book to write about this week. For a guy who writes about books, one would think that would be a problem, but for a literature guy like me it’s merely a chance to talk about writers rather than about books.

I’ve just ordered a book of stories, Miss Grief and Other Stories, by the writer pictured to the right, one Constance Fenimore Woolson. The grand niece of James Fenimore Cooper, Woolson had a highly successful career as a novelist and short story writer in the last quarter of the nineteenth century.

She was also a close friend of American writer Henry James, and a spate of magazine articles in places like The Nation and The New Republic are currently exploring that relationship and its effects on Woolson’s career and life in light of two new books published recently.

Besides the re-issue of Woolson’s book of stories linked above, there is a new scholarly biography by Anne Boyd Rioux, Constance Fenimore Woolson: Portrait of a Lady Novelist, a book that both the Nation and New Republic articles refer to frequently. Rioux’s thesis seems to be (and I freely admit I have not read the biography, so I am dependent on the Nation and NR articles for my knowledge of Rioux’s work) seems to be that Henry James failed to offer Woolson the support she deserved. The biography, the New Republic article implies, goes so far as to suggest that James is – indirectly, to be sure – somehow responsible, because of his neglect of Woolson, for her suicide (she jumped out of a 3rd story window into a Venetian canal at the age of 54).

I offer two observations about this. The first is that, if these articles are to be trusted (and I believe they can be), a Woolson renaissance may give us another writer who, if not quite at the level of Edith Wharton, was a contemporary of real talent. The second observation is less sanguine. Rioux, in making a sort of villain of James, does both Woolson and James as well as herself no credit. Rioux seems to have fallen into the trap so much of literary criticism of the last couple of decades has fallen into: she believes that in order to resuscitate the reputation of a neglected author she must assail the reputation of a canonical figure. There is a problematic element to this, of course. James, a homosexual at a time when such an orientation was not only disapproved but criminalized, had real cognitive dissonance to deal with which meant that his relationship with someone like Woolson would be at best an arm’s length relationship. Woolson, as described by Rioux, seems to have had demons of her own that such a careful, literary friendship would not have addressed. Perhaps the James/Woolson relationship brought neither a satisfying comfort.

The title story of the newly published collection, “Miss Grief,” seems indicative of the dilemma of the Woolson/James relationship. A woman writer seeks the advice and guidance of a famous male writer. He offers her criticism, sincerely meant. She rejects his ideas and pursues her own path. She dies believing that she is an overlooked talent. The narrator, clearly based on Henry James, admits as much at the story’s end:

She, with the greater power, failed – I, with the less, succeeded. But no praise is due to me for that….

James recognized Woolson’s talent, too (he wrote a profile of her for Harper’s that is careful, probably too careful, in its assessment of her work). Like James, Woolson took her work seriously and struggled to produce work of a high standard. Unlike James, her reputation went into eclipse after her death. Was this a gender bias issue? Was it a taste issue?

Perhaps this renaissance of Woolson and her work will answer those questions.