The Accidental Salvation of Gracie Lee resonates like a National guitar with the voices of great Southern literature…. 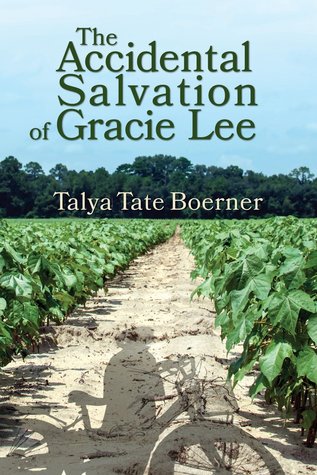 Talya Tate Boerner’s novel The Accidental Salvation of Gracie Lee echoes with the history of Southern literature. There are the voices of the gothic South: Faulkner, Harper Lee, and certainly Eudora Welty. There are also suggestions of the “dirty South” of Carson McCullers, Harry Crews, and Richard Ford. This is all good and it gives the novel a gravitas that its subject natter deserves.

There is another school of writing that Boerner’s debut novel owes a debt to. This is what Joe David Bellamy terms “lifestyle fiction.” It has some notable Southern practitioners including Lee Smith, Kaye Gibbons, and Dorothy Allison. Boerner’s pre-teen narrator owes a good bit especially to the latter two authors mentioned, Gibbons and Allison. The Accidental Salvation of Gracie Lee, then, walks a narrow, meandering path, sometimes veering in the direction of Welty and Lee, sometimes in the direction of Gibbons and Allison.

An observant reader sees Boerner torn between which of these directions makes most sense for her work and that gives the novel a sometimes infuriating but always undeniable charm.

Grace Lee Eudora Abbott, the protagonist and narrator of The Accidental Salvation of Gracie Lee, is one of those endearing characters cut from the same cloth as Scout Finch, Bone Boatwright, and Ellen Foster. Though her life is less desperate, like Bone Boatwright, Gracie Lee lives in fear of her father’s temper and drinking. Unlike Ellen Foster, Gracie has protectors in her kind mother, her occasional babysitter Mae, and her minister Brother Brown. She also has a sister, Abby, who provides her with companionship and who serves as a foil for Gracie at times. Gracie is a child, and she thinks as a child does – so while she makes a highly entertaining narrator, she is also unreliable.

In fact, while Gracie complains a good bit of the time, she actually has a pretty good life. Her father is a hardworking and very successful cotton farmer, and while his behavior is at times stupid and cruel (he once tries, while drunk, to kill the family dog – the dog proves more than a match in their battle of wits), it is at least partially explained by the battle with cancer that forms one story arc of the novel – and which provides the book with its most chilling moment.

Gracie’s narrative, and so the novel, rambles from incident to incident, though the sequence of events is limited to slightly before and slightly after her 10th birthday. We see Gracie accidentally get saved at church, get elected Harvest Queen, have an exciting (and dangerous) adventure at summer camp, sneak away from home to visit both a nearby house (owned by a neighbor who has shot himself) and a carnival passing through the area.

And maybe that is where The Accidental Salvation of Gracie Lee breaks down. It’s as if Boerner can’t decide whether she wants the novel to be a definitively adult novel told from the point of view of a child (like Ellen Foster and Bastard Out of Carolina) or a novel that both children and adults might read (like To Kill a Mocking bird or Huckleberry Finn). Because Boerner’s narration is excellent in its consistency in maintaining the point of view of a 10 year-old Arkansas girl in the early 1970s, the wild swings in events sometimes jar the reader. The ever simmering anger at life and occasional cruelty to his family of Lee Abbott, Gracie’s father, does not always jibe with what is in many ways a lyrical Southern memoir of childhood.

And Gracie herself is a strange mix of elements. She has a natural bent for comedy, though her humor is not always intentional. But she is also a secretive and persistent brooder whose feelings for her father vacillate between deep hatred and deep love in ways that don’t always seem to make sense. And it is that inconsistency, certainly reasonable and indeed even to be expected in a child of 10 that makes her most complicated act, assisting her father in ending his life to escape the last days of his terminal cancer, troubling. One is not sure, even after her confession to her preacher, Brother Brown, and his reassurance that she did not commit murder, if she will be able to make peace with her deed.

Gracie Lee is a tough girl, though. As I think about it, it seems to me that perhaps she shares the tender toughness of another great Southern child character – a boy whose last name is Finn. Like Huck, one worries about Gracie Lee at the end of the book – but one also feels that if anyone can survive, it’s her.

One last observation, this one based in my own literary preferences. The story that Boerner references numerous times throughout the novel, Eudora Welty’s “The Death of the Traveling Salesman,” while wonderful does not seem the story that best conveys Gracie Lee’s (or her father’s) character. The Welty story that does so seems to me to be “Why I Live at the P.O.” Gracie Lee, like Sister in that great Welty story, is one of those people who is not afraid to ask the hard questions – and, like Sister, will probably pay dearly for that courage.

I hope to hear more from her.