The duality in Harper Lee…

“…if you can learn a simple trick, Scout, you’ll get along a lot better with all kinds of folks. You never really understand a person until you consider things from his point of view-until you climb into his skin and walk around in it.” – Harper Lee 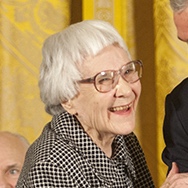 As everyone already knows, the iconic American novelist Harper Lee, whose novel about an ethical attorney’s attempt to overcome prejudice and gain justice for his client, To Kill a Mockingbird, is both a signal work of the Civil Rights Era and a classic of American literature, died Friday at the age of 89. She has been widely eulogized already, and tributes and elegies and encomiums of all sorts will flow across media over the coming days.

They are well deserved, but one may rest at least somewhat assured that they will likely not address one of the most puzzling and fascinating aspects of an American author whose penchant for storytelling and privacy give her something in common with that other great recluse of American letters in her generation, J.D. Salinger. Lee was a person and a writer whose mind clearly worked in terms of duality, duality which one can trace across her career and in her work.

A look at the life of Harper Lee provides the first example of this duality. Harper Lee moved to New York in the late 1940’s and worked hard at becoming a successful writer. During this time she renewed her friendship with childhood pal Truman Persons who, under the pen name Truman Capote, had become a successful author and one of American letters’ great publicity whores. Through Capote’s connections Lee found an agent who helped her find a publisher (Lippincott) and sell a manuscript (the now famous/infamous Go Set a Watchman). Dissatisfied with the quality of that manuscript , Lee’s editor, Tay Hohoff, coached Lee through the “revision” (think complete rewrite) of the manuscript into the novel we now know as To Kill a Mockingbird.

That book, as we know, made Lee world famous. She discovered, like Salinger, that she didn’t like being famous. And so she retreated to her hometown in Alabama and lived very privately. While she never quite reached the paranoiac behavior of Salinger, Lee certainly showed that she was uncomfortable with fame. She believed in her work and she was happy to have it appreciated, even celebrated. She didn’t like the fame that came to her as an author –  and person. Duality of mind, it would seem.

This sense of duality extends to Lee’s seminal work. To Kill a Mockingbird isn’t really one book – it’s two novellas yoked together. The first novella is a series of anecdotes about the Finch family, the old home plantation, and Scout Finch’s childhood before the fateful events that make up what most people think of when they think of the plot of the novel. The second novella is the story that everyone remembers from the book and the film: the story of Atticus Finch’s defense of Tom Robinson, a young black man wrongly accused of the rape of a white woman. When one reads the history of the novel’s development, it is easy enough to see how this duality occurred. Lee’s editor Tay Hohoff shepherded Lee through the reshaping of her original manuscript in an intensely personal way (those of scholarly and literary bents will be reminded of the relationship between Maxwell Perkins and Thomas Wolfe). What happened it would seem is that Lee developed the novella that forms part 2 of To Kill a Mockingbird and Hohoff helped her takes the childhood section of Go Set a Watchman to form part 1 of the novel. Hence the author’s great work is, in essence, a duality.

Finally, there is the controversial “sequel/prequel” published last year under the title of Lee’s original manuscript, Go Set a Watchman. Is this the story Lee wanted to tell but was talked out of/guided away from by her editor at Lippincott? Was Lee manipulated into publishing the manuscript by her attorney, her literary agent, and her publisher? That is neither here or there, especially now that Lee is gone. What is interesting to note is that once again Lee’s struggle with duality emerges – most of the discussion of the novel focused upon the depiction of Atticus Finch, the upright, morally admirable hero of Mockingbird as, if not a racist, one who countenances and even accepts the racism of his neighbors too easily. In her last work Lee then creates an uneasy duality for her readers to struggle with: is the beloved Atticus Finch the moral paragon of Mockingbird or the deeply flawed racist of Watchman?

Perhaps this was a question that Lee, who based the character Atticus on her own father, struggled with and perhaps it is the key to understanding what makes this sense of duality pervade her life and work. One must give Lee full credit, however, for taking on such struggles and for being willing to try to walk around in others’ shoes. One can fault (if one feels the need) Lee for always seeming to be of two minds – one can never fault her courage.