‘Stand by your (wo)man’: create an expectation of equality

This has been a weird few weeks for women.

There’s talk of opening up the draft in the United States to women, now that more women are taking on combat roles.

President Barack Obama has once again lamented the pay disparity between men and women when working the same job.

Women are taking on an increasingly powerful and high-profile role in many areas of the economy, including the IT sphere, becoming pioneers in a rapidly expanding and evolving world and breaking some barriers by taking on executive positions in major international companies.

This is all terrific! After generations of burning bras and bucking traditional gender roles, there’s a greater sense that women can do anything that men can. This is without noting that after the snowstorm that crippled Washington, D.C., a few weeks ago, the first federal employees to return to the U.S. Senate were women, by the way.

So why is it that women are still, in some instances, less than the sum of their reproductive parts?

In a piece for the Daily Beast earlier this month, tech reporter Lauren Dragan noted that there was nary a small space for her, a new mom, to do what she biologically and physically needed to do to care for her child during the massive Consumer Electronics Show in Las Vegas in January. She needed to pump breast milk but had a hard time finding a place in which to do what she is literally built to do, as a reproductive female mammal with glands that create milk for her to feed her infant child.

The American Academy of Pediatrics, the U.S. Dietary Guidelines, the World Health Organization and countless other international organizations all encourage women to breastfeed or otherwise provide breast milk to infants when they are physically able to do so, for at least the first six months of their baby’s life, and up to a year or more if possible. There are immunity and bonding benefits for both mother and child that are not quite replicated through the use of formula, plus, in some developing countries or poor communities, formula’s just too expensive to be a viable option. 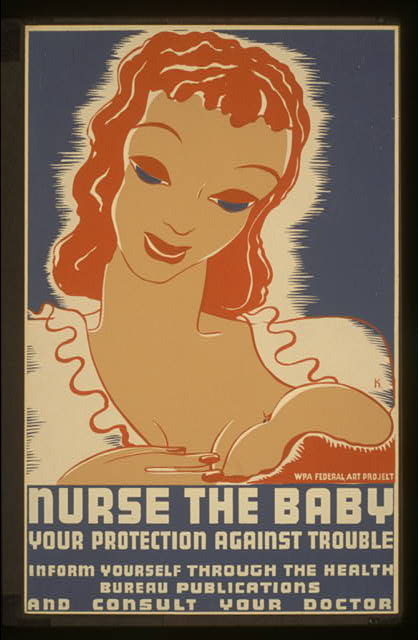 Given the forward-thinking image of CES and the sheer number of attendees from all aspects of the technology universe — an estimated 173,000 people attend every year, an increasing number of which are women — it stands to reason that some CES attendees are women who have recently had a baby and need space to pump. There was a grand total of one facility for nursing mothers to pump breast milk, alleviating what is an incredibly uncomfortable and painful situation when not taken care of for hours at a time, and the response of the event’s organizers was, essentially, just use the bathroom and don’t make a big deal out of it.

For some perspective: This is not just an issue for a big, shiny, pricey, gadget-heavy conference. This past week, a county government office where I live was lauded on the local evening newscast for creating a lactation room for new and nursing moms, at a minimal cost to the county government. A viewer sent a tweet to the news station, suggesting this wasn’t an appropriate use of government funds, that it was unfair to provide such a space to women, and saying bathrooms should be just fine for women to do what they need to do (or endure what I understand is a really uncomfortable situation, should they not be able to pump when they need to).

“First of all, breast milk is food. Imagine someone told you that the lunch you ate at a restaurant was prepared in a public toilet stall. You’d freak out and call the health department, right? Of course you would, because bathrooms are not made for the creation of food. Pumping requires the same level of hygienic standards as any other meal prep. Hands must be clean, surfaces must be washed and sanitized. None of this is possible in a bathroom stall.

“You can understand, then, why this answer was astonishing to me. A convention like CES has such massive attendance, surely some women must have participated while pumping.”

“Even Comic-Con has lactation rooms for attendees,” she says, “and most people aren’t going to Comic-Con for work purposes.”

We welcome and encourage women who join the traditionally male-dominated world of technology and science and engineering, but it’s just pretty words when these women actually try to fully participate while also choosing to have children.

Remember, these things are taking place in the United States but are not problems or situations faced solely by American women. Remember that the subject of abortion and health care are controversial and political hot-button issues during this insane presidential election season we’re currently stuck in for another six or seven months. (Good grief already.) Remember that most of the men running for office on the Republican side are opposed to the idea of women having access to safe, legal and even potentially life-saving abortion services, while also fighting the idea of paid maternity leave, social safety net services like welfare or food stamps or Obama’s health-care program that provides for expanded medical programs for low-income women and their families.

It’s 2016 and women are still being treated as Other. Have a baby with your husband/boyfriend/partner? Congratulations! Here’s a small tax break and a pat on the back for doing your biological duty. Don’t ask us for anything at all ever. Become pregnant unexpectedly? You have to have that baby, but we’re not going to help you care for it without making it literally a federal issue and judging you for your actions (while not holding the man who helped create that fetus responsible for a thing, not a single penny, and if he can’t be found, well, guess you should’ve thought a little more about who you’re associating with, huh?). But once you have that baby, you really shouldn’t nurse or pump milk in any kind of public place because it’s gross and icky and an unnecessary expense that we shouldn’t have to pay for, as a society, because that’s some kind of extra, special, unfair request to make of an employer or work environment.

By the way, would that kind of advice be given to men about anything? Are men ever told not to do something recreational or fun? This is a country that has zero problem with medical insurance paying for Viagra, for crying out loud, but had Congressional hearings—more than one!!!—about whether birth control pills should be covered, because, y’know, the women who take them are sluts and the government shouldn’t subsidize their immoral, out-of-wedlock promiscuity.

What the ever-loving hell. Women are seen as nothing more than baby makers, but giving them the tools they need to care for their children is an exceptional and unnecessary expense. Women who chose not to have children — or who can’t, for some reason — are pariahs, shirking their biological duty and wasting their place on this Earth, selfish harpies who have no right to have an opinion on issues pertaining to the struggles of women who are raising children.

Our world is advancing and evolving and becoming more open-minded. That’s easy to see and should be commended. But until the responsibilities and decisions of women, and their dominion over their own bodies, are respected as unflinchingly and unwaveringly as men, we’re moving backwards.

Amber Healy, a journalist who has covered NASA and other federal agencies, is never happier than when she’s asking questions or engrossed in something musical. Up for anything, more curious with each passing day, ready with a story, she’s a firm believer in the adage that you should learn something every day.