A Sweetness to the Soul: which matters – the novel or the history?

Jane Kirkpatrick’s historical novel A Sweetness to the Soul does a fine job of giving the reader historical information about Oregon pioneers in the second half of the 20th century; it struggles, however, with whether it wants to be a novel or history…. 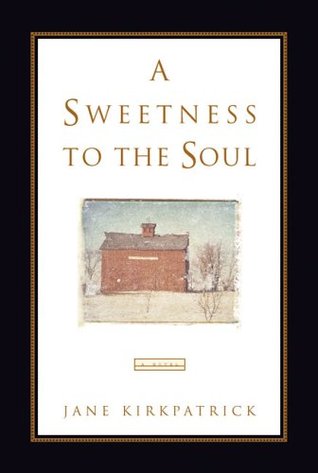 A Sweetness to the Soul by Jane Kirkpatrick (image courtesy Goodreads)

The first book from the 2016 reading list is a historical novel from one of our many bookshelves, a book that my Carol asked me to read. A Sweetness to the Soul details the lives of an Oregon pioneer couple during the latter half of the 19th century. As with most historical novels it is long (though it covers only the lifetime of one generation) and it offers a mix of historical fact and fiction. As one would expect with a novel set in the 19th century West, Native Americans, Chinese immigrants, and Hispanics play significant roles in the narrative. Interestingly, since this novel relies on historical accuracy, there is almost none of the “traditional” sort of violence one associates with Westerns. There are, however, the sorts of natural disasters one expects for  pioneers living in a wilderness: forest fires, floods, and blizzards.

This is a novel of pioneer life, accurate and eventful, that nonetheless readers will find echoes the frontier life of Laura Ingalls Wilder’s work more than that of Zane Grey.

The main characters in A Sweetness to the Soul are Joseph Sherar, a New Yorker who goes first to California during the Gold Rush (where he makes his fortune, not in gold but as a goods supplier to miners and as a rancher) and Jane Herbert, a young (12!) Oregon pioneer woman that Sherar meets and marries only a couple of years later (Sherar is 14 years older than his bride, not an uncommon incidence in their times). Their story is a story of vision, struggle, and achievement.

The historical Sherar built bridges and roads in some of the most difficult, mountainous areas of Oregon. He constructed the first lasting bridge over the Deschutes River.   He and his wife Jane ran an inn, ranched, and became wealthy raising cattle and sheep. In the novel Joseph Sherar is depicted as a man of vision, ever questing after new goals, never quite satisfied with what he has accomplished – with the exception, perhaps, of his marriage to wife Jane.

Jane’s friendship with Sunmiet, a member of the Warm Springs tribe, is traced throughout the novel and depicts in a believable way the relations between ordinary settlers and Native Americans as it chronicles the relationship as the friendship between  two women. This relationship is in many ways crucial to the novel, as Sunmiet replaces both sisters Jane lost to cholera and the distant mother who blamed her for their deaths and rejected her.

The interesting – and problematic – nature of A Sweetness to the Soul results from two elements. First, the novel’s story oscillates between the story of Jane’s psychological struggles coming to terms with the deaths of her siblings  – which she chronicles often and extensively – and her chronicle of pioneer life. The transition between these story lines is not always smooth – or predictable. That makes for a slightly bumpy narrative and a reader may feel that the author hasn’t quite made up her mind whether Jane’s story or the history of 19th century Oregon should form the spine of the novel. And that is the work’s second interesting and problematic element: Kirkpatrick works so hard at making sure she gets in all the historical details of the Sherars’ lives that she sometimes allows that to trump the chance at good storytelling. The most egregious example of this comes at the work’s end: the author includes an epilogue  that jumps ahead 20 years and spoils the novel’s ending providing as it does the eventual fate of one of the main characters needlessly.

A Sweetness to the Soul certainly has a richness to it and there are unforgettable scenes: 12 year old Jane setting fire to a den of rattlesnakes; Joseph struggling to make his way through an early season blizzard. It also examines some serious social issues: Jane’s difficult and painful home life with a father willing to use her to repay a gambling debt and a mother who blames her for the deaths of her younger siblings; the difficult life of Jane’s friend Sunmiet whose husband is unable to reconcile himself to the changing cultural life of his  tribe.  But the narrative is ultimately problematic because the author struggles between the story lines and so the narrative lacks a cohesion that would make it a stronger work.