It’s good to be a white domestic terrorist in the United States.

Armed self-proclaimed “militia members” have seized control of the headquarters of the Malheur National Wildlife Refuge near Burns, Oregon. Gun-toting individuals from a dozen or more states have been showing up in the small town since November, when two convicted arsonists had their too-lenient sentences revoked in favor of federally-mandated longer minimums.

The  terrorists, whose leaders include Ryan and Ammon Bundy, sons of scofflaw Nevada rancher Cliven Bundy, and internet media producer Pete Santilli, claim to have 100-150 followers (although that number is heavily disputed and may be only 10% of what is claimed). Like so many others on the far-right fringe, this groups is claiming to be “upholding the US Constitution” and opposing government “tyranny.” Ryan Bundy explains their goal:

“The best possible outcome is that the ranchers that have been kicked out of the area, then they will come back and reclaim their land, and the wildlife refuge will be shut down forever and the federal government will relinquish such control. What we’re doing is not rebellious. What we’re doing is in accordance with the Constitution, which is the supreme law of the land.”

And unless this situation is vastly different from other ongoing acts of defiance perpetrated by right-wing extremists, this standoff will be allowed to continue, unchallenged for years. After all, no one wants to be associated with the Ruby Ridge or Waco of the 21st century. The Burns terrorists know this, which is why “the group had brought children into the refuge,” according to Maureen Peltier, “a Washington Army National Guard staff sergeant and member of the so-called patriot movement.”

Make no mistake, if the perpetrators were Black or Muslim, this occupation would already be over. With extreme prejudice.

What happened in Burns, Oregon

The Hammonds family owns about 12,000 acres in Burns, Oregon, where they raise cattle. They also lease over 25,000 acres owned by the United States to supplement their acreage. Their disputes with the federal government date back more than 20 years.

The latest chapter in this convoluted tale started in October when Chief U.S. District Judge Ann Aiken sentenced Dwight Hammond and his son Steve to five years in prison by for arsons they committed on federal lands. Both had been  convicted in 2012 by a jury that chose to defy the federal minimums established for arson on federal property under the “Antiterrorism and Effective Death Penalty Act of 1996.” Dwight was sentenced to 3 months and Steve to 1 year. Steve received a longer sentence because he was convicted of 2 separate counts of arson, the first was carried out to cover up illegal poaching of deer on federal land. Both served their sentences which were appealed by prosecutors to the Ninth Circuit Court of Appeals which found that:

In 2014, The Hammonds appealed to the US Supreme Court to have the decision of the Ninth Circuit overturned. SCOTUS denied the appeal.

Seven months after the Supreme Court refused to get involved, “Chief Judge Aiken imposed five year prison terms on each of the Hammonds, with credit for time they already served.” The Hammonds are scheduled to begin their sentences tomorrow, January 4, 2016.

In November, Ammon Bundy showed up, looking for ways to help the Hammonds avoid prison. The Hammonds, through their attorneys, deny that they want to violate the jail sentence.

Ammon described his frustration at his reception by locals:

“We went to the local communities and presented it many times and to many different people,” he said. “They were not strong enough to make the stand. So many individuals across the United States and in Oregon are making this stand. We hope they will grab onto this and realize that it’s been happening.”

On Saturday, January 2, the Bundy Brothers, along with about 300 others from the area and elsewhere in the US, marched from a local grocery store to the Hammond house to show their support. They sang the national anthem, threw pennies at the Burns courthouse (to symbolize “buying back their government“), and took bouquets of flowers to the Hammond house where

Hammond and his wife, Susan, greeted marchers, who planted flower bouquets in the snow. They sang some songs, Hammond said a few words, and the protesters marched back to their cars.

At that point some of the militia members went to county fairgrounds for a “post-parade function.” Others, including the Bundy Brothers, Santilli, and a number of others including military veterans, all armed, proceeded to the Malheur National Wildlife Refuge headquarters building, which they have occuppied.

In an interview with reporters, Ammon Bundy admitted to planning the takeover, “We’re planning on staying here for years, absolutely. This is not a decision we’ve made at the last minute.” He has posted a call to arms on his Facebook page: “ALL PATRIOTS ITS TIME TO STAND UP NOT STAND DOWN!!! WE NEED YOUR HELP!!! COME PREPARED.” 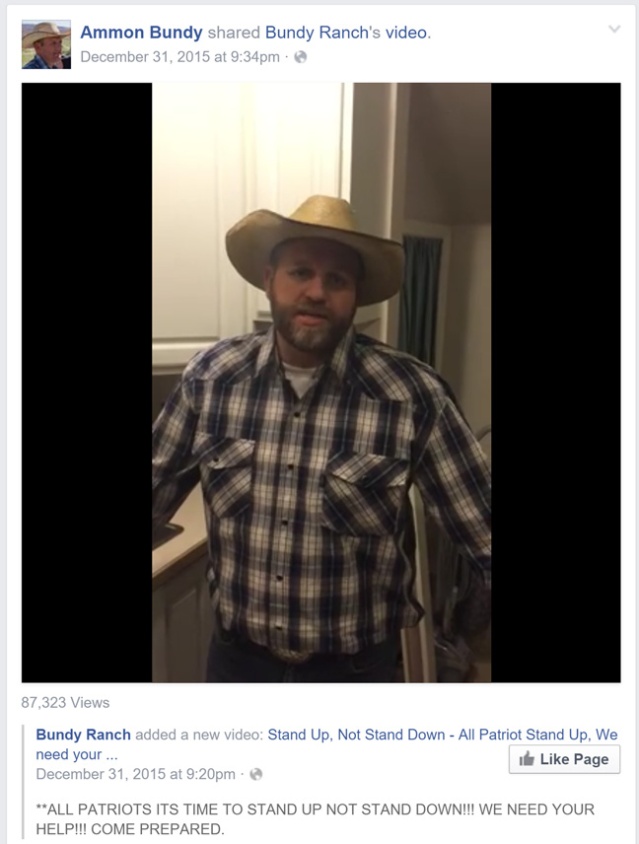 The “Bundy Ranch” mentioned in the post is the ranch in Nevada owned by Ammon’s father Cliven. The senior Bundy has been ripping off American taxpayers for 22 years by refusing to pay fees for using federal lands to graze his cattle. The family owns 160 acres in Clark County Nevada, but they have been using 145,604 acres (called the “Bunkerville Allotment”) owned by the United States and managed by the Bureau of Land Management, for free, to raise their cattle. From 1954 to 1993, the Bundy family paid for the right to use the land. But in 1993, they stopped.

For 22 years, the Bundy family has gotten away with its illegal activity. In 1998, they were ordered to stop grazing cattle on the Bunkerville Allotment. The illegal grazing continued. In fact it continues to this day. In 2012, the federal government announced it would remove the illegal cattle–then they backed off when there were rumors of violence. In 2014, the government announced it would close the Bunkerville Allotment and remove all illegal cattle.

The Bundy family issued “Range War Emergency Notice and Demand for Protection” to officials. Armed supporters flocked to the Bundy ranch to help Cliven, Ammon, and Ryan protect the family rights. Four hundred illegal cattle were rounded up in the disputed area–90% belonged to Bundy. The cattle were later returned. Clive Bundy was briefly the darling of the right-wing media and was a frequent guest on Fox News shows.

Bundy Ranch standoff continues out of the headlines. The family refuses to pay its fees and the government continues to allow the illegal grazing to continue.

But the Bundy family does not hold the record for a government standoff. That would be John Joe Gray.

John Joe Gray has been holed up in his fortified compound in Trinidad, Texas, near Waco, for 16 years.

In 1999, he assaulted two Texas state troopers during a traffic stop. His family bailed him out and they have supported him in the family compound ever since. The Gray family told law enforcement to “bring extra body bags” if they ever want to arrest John Gray.

Henderson County, Texas, Sheriff Ray Nutt stated in 2011 “John Joe Gray is not worth it. Ten of him is not worth going up there and getting one of my young deputies killed.”

And four more years have passed with no action from authorities at any level.

All three counties–Harney in Oregon, Clark in Nevada, and Henderson in Texas–are rural and very conservative. All three situations are related to the “sovereign citizen” movement. It is defined as:

The “sovereign citizen” movement is a loosely organized collection of groups and individuals who have adopted a right-wing anarchist ideology originating in the theories of a group called the Posse Comitatus in the 1970s. Its adherents believe that virtually all existing government in the United States is illegitimate and they seek to “restore” an idealized, minimalist government that never actually existed. To this end, sovereign citizens wage war against the government and other forms of authority using “paper terrorism” harassment and intimidation tactics, and occasionally resorting to violence.

In addition all three standoffs have involved defiance and threats of violence–explicit or implicit–by heavily armed supporters of the main actors. The presence of weapons has been effective.

In phone interviews from inside the occupied building Saturday night, Ammon Bundy and his brother, Ryan Bundy, said they are not looking to hurt anyone. But they would not rule out violence if police tried to remove them, they said.

As alluded to earlier, no one, at any level of government, wants to be responsible for the next Ruby Ridge or Waco confrontation.

In contrast, armed standoffs involving minority groups have been generally short-lived. The MOVE house in Philadelphia was bombed within days of its inhabitants’ standoff with police.

In the case of the Bundy and Hammond ranches, these families should not be viewed as “small family farmers” who have in a great deal in common the average middle-income American. They are blue collar–perhaps–in occupation, not in economic status. Cattle operations that occupy tens of thousands of acres are large economic enterprises.

Are the occupiers in Burns, Oregon, terrorists? There is an excellent analysis on The Southwest Journal entitled “The BLM, Ranchers, and Domestic Terrorism Part II: Prosecution, Terrorism, and Equality under the law.” The author summarizes the characteristics of “domestic terrorism”:

The author wrote the analysis in November, 2015, before the current standoff and concluded that the original arsons, prosecuted under the Antiterrorism and Effective Death Penalty Act of 1996, met the definition of terrorism.

It is certainly evident that the current illegal, armed occupation of federal property in order to intimidate the government into changing its policies in Harney County meets the criteria of terrorism.

Of course it’s also important to remember “One man’s terrorist is another man’s freedom fighter.”

We’ll see in the coming days whether officials at any level of government in the US have the stomach for enforcing the law when the perpetrators are angry, armed, and white.