We have serious problems to solve, and we need serious people to solve them. And whatever your particular problem is, I promise you, Bob Rumson is not the least bit interested in solving it. He is interested in two things, and two things only: Making you afraid of it, and telling you who’s to blame for it. That, ladies and gentlemen, is how you win elections.

You gather a group of middle-aged, middle-class, middle-income voters who remember with longing an easier time, and you talk to them about family and American values and character. … You scream about patriotism and tell them [who’s] to blame for their lot in life … [emphasis added]

Now remove Bob Rumson’s name and insert the name of any of the recent CNN main stage GOP presidential candidates (or even Wolf Blitzer, as he goaded them into ISIS hysteria). Each follows the Rumson playbook: Make us afraid. Blame ISIS. Promise to bomb the shit out of ISIS, even it means killing civilians — and children. Result: Radical Islamic terrorists are blamed and thus killed; fear ends; America emerges triumphant again as savior of freedom, democracy, and what have you.

Any candidate who believes the route to “Make America Great Again” requires urging us to fear The Other and telling us The Other is to blame for our ills is a callous charlatan incapable of inclusive, effective, intelligent leadership.

These candidates promote The Other as The Danger — this time, prominently, ISIS. They say they want to — rather, will — keep us safe. They’ll kill ISIS with carpet-bombing and a small cadre of ground “support” troops. But it isn’t ISIS that’s going to kill us.

We face death in the homeland from far more grievous causes.

Influenza and pneumonia will kill us: 56,979 Americans dead.

Nephritis, nephrotic syndrome, and nephrosis will kill us: 47,112 Americans dead.

And, of course, guns will kill us: Since Sept. 11, 2001, more than 400,000 Americans are dead due to gun violence of all kinds, including homicides, accidents, and suicides.

ISIS is not the largest threat to the lives and security of Americans. Yet hyping ISIS as The Feared Other is the biggest tool in the GOP playbook. A promise, nay, a pledge, to increase funding for war and “defense” is a required campaign tactic, not increasing funding for the principal reasons so many Americans die each year.

These GOP candidates breed fear. They blame ISIS. They blame Muslims. They offer promises of ending at long last Mideast incursions by America without the devilish details of costs or methods.

They blame so many others for America’s problems: Illegal immigrants. Legal immigrants. Mexicans. Gays. Teachers. Planned Parenthood. Unions. Gun control advocates. The liberal media. Liberals in general. The Supreme Court. These candidates do not accept, indeed do not tolerate, any notion that obstreperous, obstructionist elements of the Republican Party have played significant roles in fostering many issues America faces.

Such behavior is outrageous.

This cast of Republican presidential candidates practices coldly calculating deceit, publicly presents the charm of rooting warthogs, and lacks the capacity to admit to error in thought, word, or deed. (Yes, I know: There are Democratic candidates, and their behaviors have an odious taint at times as well. After all, Hillary uses a Ouija board to divine her personality du jour. But for sheer assholery, no one tops these Republicans.)

These candidates are nasty people as well.

They may remember the Reagan Rule, but they do not practice it. They not only speak ill of fellow Republicans, they also speak ill of innocent immigrants, current and past office holders of varied political persuasion, leaders of other nations considered allies, and opponents who do not support them or their policy platforms. They drown candid, competent, opposing thoughts in verbal thuggery. 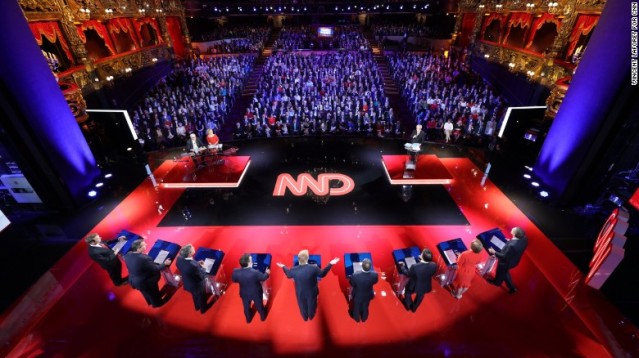 CNN is not without fault in presenting them this way in the last debate. Given the list of American problems — the rising national debt, a fractured Congress, racial and ethnic divisiveness, a Supreme Court less supreme than usual, corporate misbehaviors of various kinds, deteriorating infrastructure, wealth inequity, rising health-care costs, student-loan debt, and rising education costs — why did CNN let them yammer endlessly about ISIS?

Answer: Ratings, of course. CNN egged on the rhetorical assault on ISIS and common sense to induce 18 million viewers to eagerly watch the freak show — much like crowds at NASCAR races anticipate spectacular, multi-car wipeouts. Trump crashes into Bush; Bush spins out against Rubio; Rubio hip-checks Cruz into a wall. Carson? He couldn’t find his car. Oh, well.

Do you wish to vote for candidates who do not show respect for each other? Or you? Can you imagine any of these candidates consulting the leaders of Great Britain, France, Germany, China, Brazil, or Russia (presumably steadfast or circumstantial allies)?

Do you believe any of these candidates can serve the nation’s best interests in foreign policy? Would they, in a debate, be able to even name the leaders of these nations? Do you even think their touted business acumen qualifies them to manage the executive branch of the federal government? Do you think they understand, let alone support, needed actions to forestall further climate change?

Forget, for a moment, that they belong to any political party. Are any of them people you’d like representing you? Making meaningful decisions that affect your own life, your future, your children’s future?

You may sense a bit of anger here. We should all be outraged that our two-party, money-flooded political system has continued to provide us with crap for choices. Who wants a president who can’t keep his or her eye on the right balls at the right times?

Electing any overwrought, billionaire-bought, astonishingly egotistical demagogue from either party represents a continuing descent into American un-exceptionalism. It is difficult to consider these candidates as anything more than heavily mediated misanthropes. We elect any of them at our peril.