How dangerous is Donald Trump to the GOP? 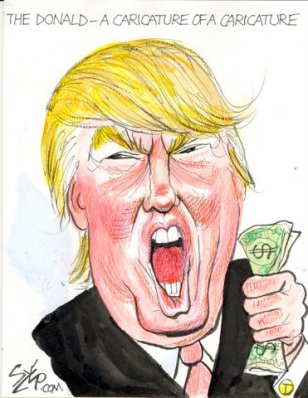 Sam Harris has said something about how reading something never changes anyone’s mind, no matter how correct or well-reasoned the argument. He’s right about that—it’s why I’ve pretty much given up blogging—but it is possible to change your mind by writing one.

This blog started out as a gleeful rant about how Donald Trump was putting a desperate Republican Party into an untenable position. Either he’d win the nomination or lose and run as a third party candidate, which would split the party, which could lead to the Dixiecrat wing seceding and setting up their own party.

And then I did some analysis.

Bummer. The truth is the Republican Party Establishment has nothing to worry about from Trump.

He’s not going to win the nomination. Their strategy to stop him is working. They’ve managed to contain him.

Step 1, they sicced their pet media on him—Hugh Hewitt, Roger Ailes and the crew at Fox, Jennifer Rubin, George Will, David Brooks. That wasn’t a total success but it did slow him enough that he wasn’t able to bull rush the pet candidates of the Establishment, e.g., Bush and Rubio.

Step 2, suicide bombers, is also working. They’ve enlisted candidates with absolutely no hope of winning who are willing to blow themselves up in hopes of a future reward. Lindsay Graham and Carly Fiorina made the talk show rounds trashing Trump. No, this hasn’t shown up in the poll numbers because the sort of folks who support Trump are what Sam Smith kindly calls “low information” voters, i.e., they don’t watch Sunday morning interviews. But what it has done, when combined with continual attacks by party insiders, is keep endorsers and big money men on the sidelines, e.g., the Kochs and Adelson.

Step 3 is to split the Trump vote in Iowa by playing religious conservatives off against Tea Party conservatives. We progressives tend to think all right wing nuts are the same. Apparently not. The wingnut wing of the Republican Party has gun fetishists, Evangelicals, anti-tax Tea Partiers, pro-lifers, racists, and probably a few more I’m forgetting. Now there are a lot of similarities between the different factions—willful ignorance, continued loyalty to an elite that has sold them out at every turn, an Alabama driver’s license, etc., but there are differences. Pulling voters away will wound him, with the hope that without his aura of winning, many of his supporters will lose interest.

If that doesn’t work, the Establishment has more tricks up its tailored sleeve. Mitch McConnell is trying to sneak a new measure into the spending bill that will allow the party to spend more to help, or hurt, candidates. And of course, there are the 437 unpledged delegates who can be deployed as required at the convention.

Odds are that one or more of these will work. He will probably lose Iowa to Cruz. The last two Iowa winners were Santorum and Huckabee. Pat Buchanan and Pat Robertson did well there. Trump could also stumble in New Hampshire, where the head of the party is openly anti-Trump. Even if he survives those two, the Establishment will probably nail him sooner or later.

So the real question is “What will Trump do when he loses?” Will he run as a third party candidate? Will 30% of Republican voters follow him and if so, will that change the election? Even better, might it lead to a permanent split in the GOP? The answers to that are “maybe,” “no,” “nope,” and “not a chance.”

In U.S. history there have been 158 third party candidates. For the most part these candidates have represented small parties you never heard of. 40% of these have been socialist, communist or the like. A large number have been Prohibition, nineteen, most of whom have been on the ballot since prohibition. The last Prohibition candidate ran in 2004.

Only a handful have been anything like Trump. Millard Fillmore (1856) ran as a Know-Nothing, an anti-immigration party. John C. Breckenridge (1860), Strom Thurmond (1948), George Wallace (1968,) John Schmitz (1972) and Lester Maddox (1976) ran for various parties which shared overtly racist platforms. Pat Buchanan, whose only qualification was that he was a bombastic media personality, ran in 2000 as did Pat Robertson in 2004. Maybe you could stretch it a bit and include other personality politicians like one-time candidate Douglas McArthur, but it’d be a stretch.

None of them have come close to winning. On average, the five most recent comps have averaged about 3% of the vote. Only one, George Wallace, got into double digits, at 13.5% of the popular vote. Using simple math and the most recent polls, it’s possible to see Donald Trump getting up to 15% of the popular vote. Not at all likely, but possible. Unfortunately, popular vote still doesn’t mean much. The real story is the electoral college. Much of Trump’s support is likely in red states, and most of those are so red that even if he carved out 10-15% of the vote, Republicans would still carry the state.

In the last election, only two red states were close enough that the Donald could swing it to the Democrats, Georgia (8% margin of GOP victory) and North Carolina (3%). That’s 31 electoral votes and the Republicans need to gain 126 to win. The only worry for the GOP is if they believe they’re on track to win states where the Democrats had a relatively narrow victory last time around, like Pennsylvania, Ohio and Florida. Even then, it’s a long shot.

Nor do they have to worry about this causing a permanent schism in the party. The structure of the U.S. political system makes that unlikely.

Unfortunately, though, just because a third party candidate doesn’t win doesn’t mean they don’t have an effect. In some cases a profound one. Usually the result is the party tacks even further in the direction of the challenger to win those voters back. George Wallace, Pat Robertson, Pat Buchanan all caused the Republican Party to shift far to the right.

Net, net, Trump isn’t going to cause the Republican Party Elite the grief we Progressives would like. He’s a case of jock itch, not lung cancer. Well, darn. This is the worst part about being a Progressive. We have to take facts into account and accept logical outcomes.