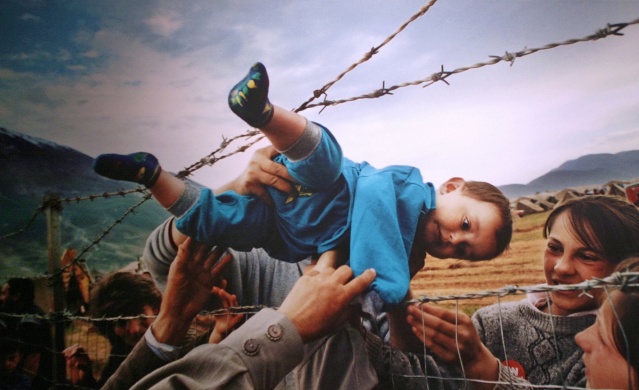 We have accepted more than 100,000 Somali refugees since 1991. In the last 25 years, 50 of them have become terrorists. That’s 0.05%, which is good, but not good enough for us. We want zero terrorists, including those who go back to Africa to kill people. We don’t want African people to die either. That is our strength, no quarter, no shadowy corner where the darkness can hide from the light. We will not accept one Syrian refugee who goes back to Syria and kills people. Our policy is no American boots on the ground in Syria, and we’re all American, even those of us who just got here from Syria.

The Atlantic article cited in the previous paragraph provides a detailed description of the Somali refugee community in Minneapolis. It’s segregated from the rest of the city. Unemployment is 20%. Half receive food assistance. That means 30% are working and still need help. In Norway, Somali refugee unemployment is 60%. In Sweden, it’s 80%. Why do they remain unemployed 25 years later? Are they not men? Do they not bleed? Can they not catch fish, mix concrete, cut wood, and inscribe scholarship? Why have these refugees, who subsist on government assistance, segregated from the societies in which they live, remained below our radar for decades?

We currently spend $38 billion on Homeland Security. Imagine if, in addition to spying on them, we gave each refugee a great big bear hug and said, “It’s cool. You are free at last.” Imagine if we met the challenge of educating and assimilating refugees by employing thousands of Americans who care about the safety and prosperity of their fellow Americans. Instead of buying millions of rounds of practice ammunition preparing for our 50 terrorists, imagine if we integrated our 50,000 underemployed refugees into the workforce and provided them mentors to help them assimilate and thrive, creating a better future for our children and simultaneously boosting the economy.

Republicans are always saying our entitlement system doesn’t have enough workers to support all the retiring baby-boomers. We got their work force right here. Germany already figured this out, guys. Let’s lead the world instead of cowering in our gated communities with our biometric gun safes. How are the Somalis, or the Syrians whom a certain neo-segregationist wants to ban, disqualified from life, liberty, and the pursuit of happiness? America is not a private club for rich businessmen. Should we have barred Trump’s grandfather from immigrating because of the slim possibility that he was an undesirable element? Do we remember who we used to be before the War on Terror?

If we really want to end terrorism, we have only one choice. We must eliminate the underlying causes. We must figure out why some people feel that their lives are already forfeit, and why they blame Western Civilization. Suicide bombers have already accepted that they will never be free. In this, we have failed them. The refugees at our doorstep have left behind their possessions, their friends, their families, and their ancestral homes. All they have is hope, hope that Americans are who we say we are, that we live by the values we claim to believe. In order to achieve our goal of zero terrorists, we must do just that.