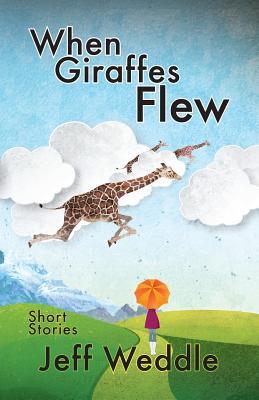 Jeff Weddle’s new collection of stories, When Giraffes Flew, is one of those short story collections that is hard to describe. The stories hang together thematically and stylistically even as they range from children witnessing horrific accidents to – well, giraffes attaining the ability to fly.

The stories range in length from longish short stories (“Dog Day,” “Bonnie and Clyde,” “Showdown at the 7-Eleven”) to flash pieces (“The Night Before,” “Test Day”). Through all these stories Weddle explores how the ordinary and the strange co-exist in life and how the one can veer into the other with surprising ease. One will be reminded at times of Harry Crews, at times of Richard Ford, at times of David Lynch. Pretty good company for any writer to find himself in.

Three stories in When Giraffes Flew offer particularly good examples of both Weddle’s skill as a storyteller and of how he incorporates his influences into his own particular style. “Dog Day” explores, in a story reminiscent of Ford, the miserable loneliness of a man whose wife has left him for one of his friends and taken their children. One feels the ache of a man on the brink in this passage:

‘I just want my kids. I just want to give my kids a dog.’ Martin’s voice broke, and he felt more ashamed than he had ever felt in his life.

The father’s desperate attempt to reach out to his children (and his ex-wife) by buying the puppy (who, to the horror of all involved has died of heat prostration by the time he delivers it) collapses into a violent encounter between the two men that leaves both mother and her new man injured as the father drives away with his terrified children.

“Showdown at the 7-Eleven” resonates with the Southern Gothic goodness of a Harry Crews tale. A story that combines incest, stripping for a living, homicide, evangelical Christianity, and life with a disability has a little something for everyone, surely. The twins Midge and Lance, the couple at the center of the story, are  like characters from a Greek myth – if that Greek myth was set among white trash Southerners. Midge’s parting gift to Lance, a phony proselytizer, is a dollar bill she received from a true believer who tried to save her. With it she bids farewell to her dreams and illusions – and to the brother/lover for whom she has broken her heart for too many years:

‘I’m a goat, Lance.I wish I were a Lamb, but I’m not.You. I think, are a fucking asshole. Maybe this dollar can help you try to at least climb up to be a goat yourself.’

We realize that Midge, though blind and alone, has finally seen the truth and can move past her false image of Lance and forward with her life. At the end of the story she strips one last time and, in a gesture that can be misconstrued by no one, douses herself with a glass of ice water. “Praise the Lord,”she says. “Why not praise his fucking name?”

The last story, “Test Day,” one of the collection’s flash pieces, has all the horrifying creepiness of a David Lynch work. After beautifully capturing the ambiance of a sixth grader named Lisa and her classroom, Weddle calmly describes the carnage an eighth grader who has brought a gun to school will wreak – including Lisa’s death. The brief narrative ends with Weddle’s description of Lisa’s preoccupations in the minutes before her death:

But right now, right this second, Lisa is thinking about her best friend Elizabeth, thinking how lucky she is to be home today. They are supposed to have a math test later, and Lisa is not ready.

One last observation. I was slightly taken aback when I first received the book and saw its cover (see above) which seemed reminiscent of a children’s book. After reading When Giraffes Flew, I realize that the cover to this fine collection is evocative of Rene Magritte. Ceçi n’est pas une pipe, indeed.