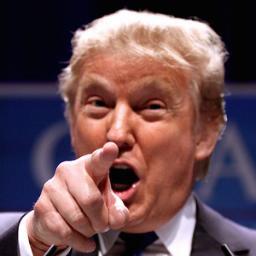 Last night Donald Trump made an interesting proposal: CNN should pay $5 million for Trump to participate in the next GOP debate on December 15. The money would not go to Trump, but to a charity for veterans. Here’s the proposal in his own words:

How about, the next debate is with CNN. Now you have to tell me, because I know what they’re going to say. Ohh Trump is chicken, how about I tell CNN (who doesn’t treat me properly, they don’t). Right? They really don’t.

How about I tell CNN that I’m not going to do the next debate. I’ll tell you the problem. This is a nice thing…

How about we do this with CNN, I won’t do the debate unless they pay me $5 million. All of which money goes to the wounded warriors and the veterans. Seriously! I would love to do it.

It certainly would be a shift in strategy. Candidates being treated as “The Talent,” as they say in the business.

Here’s a modest proposal: CNN should set a precedent and auction off the GOP debate seats. Here’s how it should work.

Let’s make it more interesting. Once all the bids are in, divide up the debate time based on final bids. Oh, and let the candidates write the questions, to ensure maximum fairness.

Granted, I’m not being serious about auctioning off democracy. But is Trump being serious about making this more about “showbiz”? Certainly CNN, Fox, CNBC, and the rest are looking for ratings. Sam Smith has written a couple of articles on Scholars & Rogues about Donald Trump’s presidential bid being an elaborate hoax (perhaps perpetrated by the late Andy Kaufman).

As the latest proof of that theory, Trump is stumping with Herman “Brother of Another Mother” Cain. Cain still has a radio show in Atlanta and a blog where he just posted this stinging critique of Jeb Bush:

A guy with his name, his money and the team behind him should be one of the top-tier contenders, and he should certainly not be letting Donald Trump wipe the floor with him if Trump is as unserious and unqualified as Bush would have you believe.

Maybe this is a hoax. It certainly seems like a bad joke. But I’m not putting money on that theory.

Andrew Nagorski wrote a book back in 2013 called Hitlerland, about contemporary American reactions to the rise of Nazi Germany. In an interview with The Atlantic, he makes two interesting, contrasting points.

First, “After the Great Depression hit, suddenly the Nazi Party became a major contender for power. Yet you had Americans meeting Hitler and saying, ‘This guy is a clown. He’s like a caricature of himself.'”

But also, “Truman Smith, who was a junior military attaché in the 1920s, came away from meeting Hitler and said, ‘This is a marvelous demagogue who can really inspire loyalty.'”

Throwing around specious, gratuitous comparisons to Hitler is a bad idea and bad history. But being aware of a tendency to demagoguery is invaluable. We should be vigilant about doing so.

So should our news media. And if Donald Trump want to be paid to provide them ratings, they should call his bluff. If they don’t, “chicken” is the least of what CNN will be.