Love and loss and making decisions – Zelle Andrews’ Paisley Memories is the epitome of the noble genre we know as  bildungsroman…. 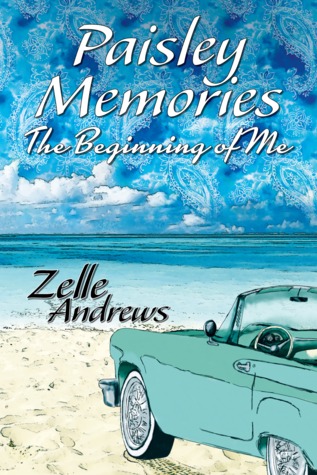 When we meet Tess Cooper, she is a young woman in trouble. Her father has just died, and she is left to fend for herself as the single mother of a two year old with Down’s Syndrome. The little Alabama town she hails from is like most little towns: gossipy, judgmental, and uncomfortable for a young person who carries visible proof of an unfortunate life decision. Faced with the choice between rearing her daughter in the social ignominy her home town provides or striking out on he road with her child and her father’s old car (a 1957 Thunderbird in need of restoration), Tess chooses the road.

Her year of wandering is passed over quickly, though Andrews’ description of a typical day (that eventually turns out to be unusual) gives the reader a glimpse into what that life has been like – struggling from small town to small town, working menial jobs to supplement her small inheritance, trying, though she hasn’t realized it yet, to find a place where she and her daughter, the Paisley of the novel’s title, fit in.

From a life that has been governed by unfortunate circumstance, Tess has developed doubts about her life choices (good) and her ability to come to terms with her choices and develop skills that will allow her to move past her choices – in essence, move past her conception of herself as failure – so that she can find happiness. It is Tess’s evolution into someone who can see herself as capable of taking care of her daughter, someone capable of fitting into a family and community, someone capable of loving and being loved that the events in Paisley Memories present.

When her car breaks down (and later is stolen) in the small town of Panacea, Florida, Tess and Paisley find themselves taken in by an eccentric lady named Naomi Mitchell. Mitchell is a photographer and has noticed Tess’s talent with a camera when Tess took a photo for a family in a restaurant. She takes in Tess, gives her a job, and starts Tess on the road to self-recovery by helping her find that she has useful skills that she can use to support herself and Paisley.

As it happens, the house where Mitchell, known to everyone by her nickname, Butterball, lives is owned by her niece Gabrielle, or Gabs, who happens to have been Tess’s best friend in high school. Gabs, an optimistic, loving friend, helps Tess begin to see herself as the young, attractive woman she is. Gabs helps Tess find her zest for life – and love.

Finally there is Aaron McMasters. Tess meets him while on a photographic assignment and learns that not all men are like her boyfriend Thom who deserted her when she became pregnant. Her slow developing relationship with him helps her regain her trust in the possibility of love.

As she gains in self-understanding, Tess gains in self-confidence. After a struggle with herself Tess realizes that she has the ability to make a living as a photographer. After another struggle with herself, she decides not to give Paisley up for adoption.  And finally, after one last struggle with herself, she allows herself to love Aaron – and to be loved in return. What makes Paisley Memories a worthwhile read is how Andrews depicts Tess’s struggles – realistically and sympathetically. After somehow surviving the twin calamities of unwed motherhood and the loss of her father, Tess Cooper finds her Panacea – and learns how to be happy.