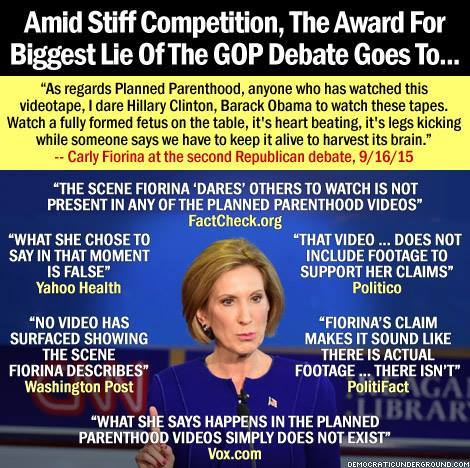 Last Saturday I posted this on social media with my own comment:

If anyone has the footage she describes, please post. Otherwise, I’ll go with the existing evidence and conclude that this is just another pernicious lie.

One friend replied with a link to the following YouTube video and pointed specifically to the part starting at about 6:01:

The best counter to that video was posted by another friend, an article from Vox: I asked Fiorina’s campaign for video to back her Planned Parenthood claim. Here’s what they sent.

Having watched the video for myself (and others from the captioned source of the 6:01 clip), I can only concur with Sarah Kliff at Vox. The child shown in the clip is not the specific child referenced by the interviewee in the Human Capital video from The Center for Medical Progress, so what we have is a voiceover allegation with an irrelevant video clip inserted for the sake of ideological and emotional manipulation to make a point and support an otherwise unsubstantiated claim that flies in the face of all other evidence. As I see the details of the 6:01 clip, even without a background in OB medicine, I can conclude only that this child was an extremely premature delivery in one context or another, and has absolutely nothing to do with abortion and is therefore utterly misleading. What it absolutely is not is evidence for Fiorina’s claim in any way shape or form.

As I’ve stated repeatedly over the years, whatever the argument, regardless of whether or not I agree with it, if it cannot be supported by actual evidence, then either one needs a new argument or needs to concede that there is no sound argument and that all they have is sentiment. Sentiment is no basis for legislation or executive power, faith-based or otherwise.

So the challenge remains. If anyone has any actual, verifiable evidence to support Fiorina’s claim, reasonable people are willing to consider it. Until then, we’ll just have to chalk it up either as a failure of reasoning capacity on her part, an error without the ethical backbone to correct it, or a pernicious lie in pursuit of ideology and political gain. Leadership qualities all, no?