Wilma Dykeman’s The Tall Woman: The Power of a Great Story 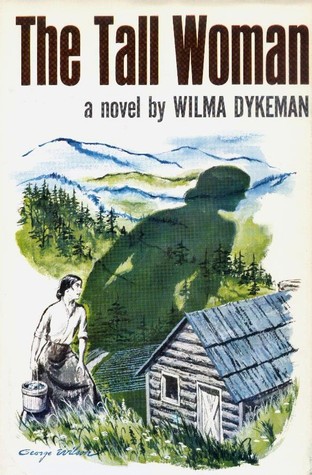 Finally, a return to the 2015 reading list after some side trips to cover in once case a current literary flap and some musings on the disappearance of protest music from American cultural experience – and what a return it is. Wilma Dykeman’s The Tall Woman is an example of the sort of rich storytelling that once populated American fiction publishing. This unpretentious but exquisitely literate – and literary in the best sense of that word – novel is an example of regional fiction that rises far above its author’s primary aim to make profound statements about human character.

Lydia Moore McQueen is a character who moves readers in the way that, say, a more celebrated (and controversial) character, Atticus Finch does: she is an example quiet courage and dignity, a brave soul who does what she feels she must and faces the challenges her life presents not without flinching, but instead with strength gathered from within. Dykeman does a fine job of taking us through the events of Lydia’s life and showing us that heroism is sometimes standing up for what is right.

We meet Lydia Moore near the end of the Civil War. She is eighteen and pursued by two men: Ham Nelson, a grasping, selfish egotistical merchant and Mark McQueen. In spite of the allure of Nelson’s wealth, Lydia chooses McQueen, a strong stalwart yeoman whose promise is greater than his estate. She and her Mark marry and live blissfully for a short time in a small cabin rented to them by Nelson, but the war intervenes and her father and brother Paul (and Nelson) join the Confederates. Mark, true to the stubborn independence notable among mountain folk, joins the Union army. During their absence guerrilla raiders called “outliers” raid the Moore farm and kidnap and torture Lydia’s mother trying to get information about where the family’s provisions are stored (they take all their livestock). This trauma plays a large role in the long arc of the novel’s narrative. When the men return from the war, Paul has lost an arm and Mark has been traumatized himself by his incarceration at the notorious prison camp Andersonville. It turns out that he had been recommended for imprisonment there by a Confederate soldier from his own mountain valley.

The unraveling of these mysteries (why was the Moor farm raided? Who caused Mark McQueen to be sent to Andersonville?) are the drivers of the rest of the novel. Much happens. Mark goes out to the West for a year, a journey that leaves Lydia home with small children and a farm to tend, though he seems to have found peace when he returns. Lydia’s younger brother Robert studies law and becomes a successful attorney. Her oldest child David, born while Mark is away at war (and prison) suffers brain damage from mishandled forceps use. Lydia and Mark raise five children (David dies from complications of measles contracted through the carelessness of Paul’s wife, the frivolous and thoughtless Dolly). Lydia eventually struggles with and defeats – Ham Nelson over the building of a proper public school for the valley’s children. Then, in one of those cruel ironies of life, Lydia suddenly contracts typhoid and dies at the age of fifty.

This skeletal synopsis of the narrative really does not do justice to the novel’s richness. Dykeman’s prose is unhurried and rich in detail. One feels the cold of a mountain spring, sees the power and grace of a red tailed hawk, hears the wind rustling the dogwood leaves on a  spring morning. But with this rich description Dykeman also provides sharp insight into the character of mountain people. Here the local schoolmaster laments the indifference shown concerning the suspicious burning of the valley’s first school:

“The people here seem to like preachers better than teachers…. There’s something in the people her – and not only here, I might add – something that’s suspicious of learning. Faith is acceptable; education is” – he shrugged – “at best, dubious. At worst, unnecessary.”

Lydia, who has been a staunch supporter of learning, knows who the culprit likely is and what his motivations are. The climactic struggle of the novel is her struggle with her spurned (and bitter) old suitor Ham Nelson. Here we get a character assessment of Nelson that rings eerily true for our own times:

“Ham Nelson is the man the Bible speaks of who gobbles up the earth and everything that’s on it and his neighbors let him – more than that, they watch him and admire.And he takes everything he’s inherited from the past, and his neighbors have inherited from the past, and he rips it out and digs it up and wastes it, and when he’s through there’s no inheritance left for the ones who are coming on tomorrow. But he doesn’t care, Because he’s greed – pure, fat, total greed….”

Eventually the truth emerges: the valley’s most influential preacher, Gentry Caldwell, is revealed as the person who betrayed the Moore farm’s supplies to the outliers. When confronted, Caldwell reveals that Nelson dealt with the outliers, along with Dolly’s father, and bought the Moore’s stolen livestock which they subsequently sold to the Confederate army. Armed with this information Lydia confronts Nelson and forces him to contribute land and help pay for the school by threatening to sue him for his part in the affair. Despite his bluster (she accedes to his demand that the school be named for him), Lydia gets the school she has desperately wanted for her own and the community’s children. Her youngest son Lafayette becomes the school’s first graduate and it is clear he will become a physician.

At this point Lydia is taken ill and dies suddenly of typhoid fever. What is remarkable about this ending is that it doesn’t feel contrived. Lydia has accomplished much in her short life. Despite the sadness the reader feels at Lydia’s death, the legacy she has created for herself and through her children feels rich and complete.

Rich and complete – those words are an apt description of The Tall Woman.