Bastard out of Carolina: literature as hot mess…

Dorothy Allison’s Bastard Out of Carolina is a compelling read, a powerful look at life among working class Southerners, and what is known in the vernacular as a “hot mess” – a beautiful work in spite of its flaws…. 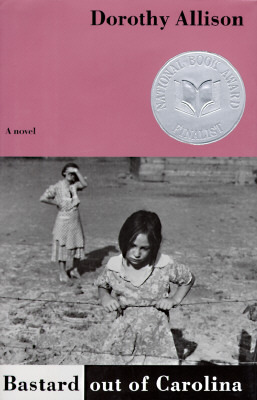 Bastard Out of Carolina by Dorothy Allison (image courtesy Goodreads)

One of the blurbs for Dorothy Allison’s Bastard Out of Carolina likens its narration to that of Harper Lee’s To Kill a Mockingbird. Don’t be fooled. There is little about Ruth Ann Boatwright, known within her family as Bone, that will remind readers of Scout Finch only in a certain feistiness at given moments. Both characters possess a certain headlong quality that can seem endearing. But Bone Boatwright and Scout Finch have so little in common in terms of their life experiences that any likeness between them as characters or as narrators is superficial at best.

Astute readers will also note that, like Mockingbird, Bastard Out of Carolina has structural flaws that have been glossed over rather than solved. The novel rambles, often needlessly, and smacks of having been pieced together from previous drafts, a short story (or perhaps a group of stories) – and not always smoothly. Finally, there are, by various accounts, semi-autobiographical elements in this work. As one reads Bastard Out of Carolina, frequently one runs into passages that have more the raw feel of the author’s journals rather than the polished feel of fictionalized experience.

These are flaws that, I have said, astute readers would note. Yet this novel was a finalist for the National Book Award, certainly an astute reader award.

And, I think, the NBA was right in its high estimation of this novel.

The main story line of Bastard Out of Carolina concerns the relationship of Bone Boatwright with her stepfather, Glen Waddell. Bone is the illegitimate daughter of Ann Boatwright (hence the “bastard” moniker of the title) and the Boatwright family are archetypal working class Southerners of the 1950’s – Ann’s brothers are hard working, hard living men fond of drinking and fighting. Her sisters are women who married young to men like their brothers. Bone has a sister, Reese, the daughter of Ann and her first husband who died in a car accident. Problems begin when Bone’s mother Ann falls in love with Glen and marries him. Perhaps the problem is the way in which Glen loves Ann Boatwright:

He loves her like a gambler loves a fast racehorse or a desperate man loves whiskey. That kind of love eats a man up.

The problem is that he resents Bone because he sees her as competition for Ann’s love. It’s an irrational view, but as Allison explains, the lives of these characters is lived according to the basic principles of “salt of the earth” Southerners:

Everything that comes to us is a blessing or a test. That’s all you need to know in this life…just the certainty that God’s got His eye on you, that He knows what you are made of, what you need to grow on. Why,questioning’s a sin, it’s pointless. He will show you your path in His own good time. And long as I remember that, I’m fine.

The problem is, of course, that nothing is fine. “Daddy Glen,” as Bone calls him, is an abusive monster who beats her and ultimately rapes her out of a bizarre desire to destroy her as competition for his wife’s/her mother’s love. Bone recognizes this:

I wanted her to to go on talking and understand without me saying anything. I wanted her to love me enough to leave him, to pack us up and take us away from him, to kill him if need be.

But for whatever reason (this is a crux the novel does not satisfactorily explain – and, I suspect, reflects an unsolved issue in Allison’s autobiography) Ann Boatwright Waddell is unable to reject Glen even after his assault on Bone:

My heart broke all over again. I wanted my life back, my mama, but I knew I would never have that. The child I had been was gone with the child she had been. We were new people, and we didn’t know each other anymore. I shook my head desperately….

The novel ends with Ann rejecting Bone, the “child of her heart,” for Glen, the fool for love. It is a depressing, though an oddly unrealistic ending (at least it feels that way). Allison, however, has warned us ahead of time that people do what they do because they act according to their best lights:

People don’t do right because of the fear of God or love of him. You do the right thing because the world doesn’t make sense if you don’t.

Perhaps Ann Boatwright sees running away with Glen Waddell as a way to save lives – her husband’s, her daughter’s, her brothers’ (they have sworn to kill Waddell for his assault on Bone).  So in leaving Bone behind she gives a life to save lives. Though it makes no sense, perhaps she tries to do a right thing. Whether what she does makes sense is the key question that makes Bastard Out of Carolina the messy, powerful, hideously beautiful masterpiece it is.