Murder and Bombs is the sort of thrill ride that any reader would be glad to add their collection of what we know fondly as “beach reads.” 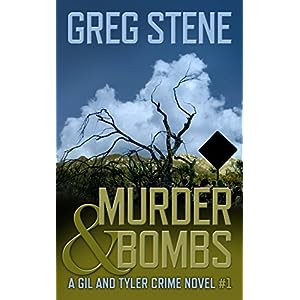 Greg Stene’s latest crime novel, Murder and Bombs, covers lots of ground despite taking place exclusively in and around Tucson, Arizona. It takes in Mexican drug cartels, the Tucson police, mad bombers, covert government operations, love and marriage, and the meaning of brotherhood. It does all this at a not-quite-breakneck pace, one that rolls along fast enough to keep the pages turning, slow enough to allow Stene to develop his characters, build suspense, and give all this craziness enough context and background to make it plausible.

Oh yes, and The Thing makes an appearance. Wouldn’t want to forget that.

The plot of Murder and Bombs is, like any good thriller plot, convoluted. Tyler Henry, one of the protagonists, is a former cop turned private investigator. While protecting a diamond courier (unsuccessfully, we might add), he kills the sniper who took out the courier, then discovers that the sniper is a guy who’s supposed to already have been dead. A retaliatory strike that destroys Tyler’s home (and kills a woman he’s trying to revive a relationship with) brings Tyler together with his former partner on the Tucson P.D., Gil Calavanti. Over the course of the novel they forge an uneasy partnership (there’s much baggage between the two that must be worked out) and discover that the sniper is only one member of a secret group funded with government dark money. This group, ostensibly a sort of “Mission Impossible” team assembled from former mob operatives to perform black ops against groups like the Mexican drug cartels goes out of control as direction of the organization is usurped from its government controller (a rogue government agent) by a mad bomber with a vendetta against Calavanti. The hijacking of this group, the kidnapping of Gil’s wife Kat by the mad bomber and her eventual rescue by Gil and Tyler, and an attempt by a Mexican cartel to assassinate a top Mexican drug enforcement agent on American soil, make for a potent climax to Murder and Bombs.

The denouement of the novel is worth a mention for a couple of reasons. First, there’s a scene where Henry goes to see The Thing (referenced above). Tyler, who’s been something of a loose cannon throughout the novel, seems to find a kind of peace – and perhaps a renewed sense of purpose for his life – at the kitschy tourist site. Then there’s Gil. The novel’s last chapter gives the reader Gil Calavanti checking his email and finding a message from the mad bomber – significant since that character was killed during the rescue of Gil’s wife Kat. The message is “It’s not over.” This, of course, cleverly sets up the possibility of a sequel. And given the enjoyable thrill ride that is Murder and Bombs, in this case I’ll suspend my usual diatribes about the proliferation of sequels and suggest that you enjoy Murder and Bombs – and its sequels – as they appear.