V. L. Brunskill’s Waving Backwards is a bildungsroman with a twist; the heroine must find her way forward by finding her way backwards…. 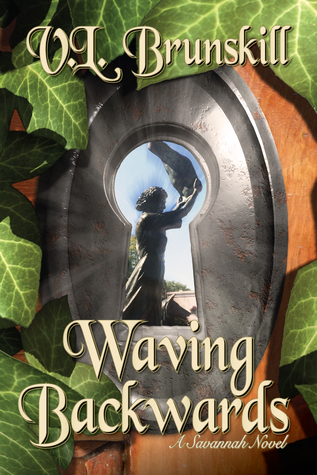 I wrote last week about Lee Smith’s excellent bildungsroman Black Mountain Breakdown. In that essay I defended Smith’s work, which falls clearly in the realm of what is sometimes unfairly dismissed as “lifestyle fiction” as a work of considerable power and a bildungsroman with a true twist: its protagonist collapses when she encounters her existential moment.

V. L. Brunskill’s Waving Backwards is similar to Smith’s novel in that its young female protagonist is trying to reach her existential moment, to come to terms with who she is as a person and what being who she is means. It’s also similar to Smith’s novel in that Waving Backwards might be dismissed as “lifestyle fiction,” as another example of what is often described as that peculiarly Southern form of lifestyle fiction called the “Mama and them” book. Such works are invariably coming-of-age tales, usually with female protagonists, that look at the eccentricities of growing up in a Southern family.

Brunskill’s novel is certainly about “Mama and them,” but in Waving Backwards the theme of “Mama and them” gets taken places that readers have likely never considered.

The plot of Waving Backwards concerns the search of a young woman, Lara Bonavito, for the biological parents she never knew. A cryptic letter sent along with the baby Lara and discovered by the adolescent Lara in the family Bible serves as the catalyst for her decision to take part of her student loan money and pursue the clues the letter offers here concerning her birth by visiting the place she determines is referenced in the letter, Savannah, Georgia. There she meets a cast of characters who aid and/or complicate her search. These include one Robert Taylor, a handsome tour guide who is from a wealthy Savannah family, Susan Fletcher, a beautiful interior designer, and Abel Bloom, a wise and wily old florist. As one might guess, Taylor is an aid of sorts for Lara and provides the novel with its romantic complications. Fletcher and Bloom become friends of Lara and serve her as sounding boards and advisers.

Eventually Lara Bonavito finds out the truth about her parentage. It is a mixed blessing: her mother was from one of Savannah’s most prominent families, but Lara’s birth was the result of a sexual assault. Complicating matters further, she finds her family (she has a living uncle) only to learn that her mother is dead. Lara’s reaction to this, and her subsequent discovery of evidence that will enable the man who fathered her to be punished for his crime provide the plot with a denouement that some readers may find a tad convenient. Still, it’s nice to know that justice will likely have its day and that Lara’s mother Virginia can rest in peace knowing that her daughter has come home and that her secret is tenderly, beautifully immortalized in the Waving Girl statue.

That’s not really what Waving Backwards is about, however. The story of Lara Bonavito’s search for and discovery of her family is the meat of this novel, and Brunskill does a fine job of conveying the mixture of emotions the success of such a search can bring to one who discovers and reunites with one’s birth family. For all the ancillary complications of the plot, how Lara is able to accept, process, and move forward from the powerful experience of finding her roots is what one should read Waving Backwards for. All that other stuff – romance, mystery, charm, and history – that’s just Savannah being Savannah.