Our choices of favorite books, those we go to time and again for pleasure, for solace, for inspiration, for – comfort – may be inexplicable, even to us…. 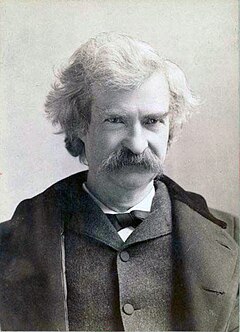 You can bet a certain Mr. Twain will be on the menu of my literary comfort foods…

As I continue my rather too leisurely reading of Walker Percy’s classic The Last Gentleman, I find myself scrambling for an essay topic. Luckily, last week I was helped out by  my friend Sam who insisted, rightly, that I wrote something about the new Harper Lee novel, Go Set a Watchman. Then I ran into an article at The Nation which allowed me to discuss two of the current movements in literary fiction.  That made for another nice essay to allow me more time to finish the Walker Percy – which I didn’t do.

Hence this essay – more dithering until I get back on track writing about items from the 2015 reading list.

I’ve been thinking for a couple of weeks about this issue, literature as intellectual comfort food. In fact, I’ve already decided that for the 2016 reading list will be devoted to a list composed of at least some of my favorite books. As anyone who reads my drivel is aware,  my tastes run to literary fiction. In past years I have also read compendia of scholarly essays, naturalists’ journals, histories, science works, and even children’s books. So here is a list of five of my comfort food books. These will certainly appear in next year’s list where I’ll write about them in more detail, so for now I’ll offer simply brief explanations of why I return to them again and again.

1) The Pickwick Papers – Charles Dickens.  By far my favorite of all Dickens’ works. As a young man, Dickens seems to have had a sunny disposition and appreciation for the ridiculous. The darkened vision and social critique that gradually overcame his later works is nowhere in evidence in this, his first proper novel. If there’s a more endearing odd couple than Mr. Samuel Pickwick and his valet Sam Weller, I have yet to meet them.

2) A Distant Mirror: The Calamitous 14th Century – Barbara Tuchman. A rich, thoughtful history with meticulously good scholarship that reads more like a novel than a history. In times such as ours, Tuchman’s book offers more of the comforts of history than almost any work I could name.

3) Winesburg, Ohio – Sherwood Anderson. Anderson is a figure whose importance to American literature waned for some time but seems to be waxing again. Besides his own work, examinations of American life that rival those of Sinclair Lewis, Anderson was a friend to young writers and boosted the careers of, among others Faulkner and Hemingway. Winesburg, Ohio means much to me as one of my own books owes it a debt.

4) Kings and Things – H.E. Marshall. This children’s history of England (roughly as accurate as history as, say, Geoffrey of Monmouth’s work) is, despite its limitations as history, a rollicking good read for any child aged 8 and up. Ms. Marshall’s treatments of Hengist and Horsa, Canute vs. the ocean waves,  and how the Black Prince obtained the crest and motto used by all Princes of Wales are just the sort of stuff any kid would love.

5) The Adventures of Tom Sawyer – Mark Twain. I know, I know. Huckleberry Finn is the greater book. But while I admire, respect, and appreciate Huck, I love Tom. He’s a guy with more imagination than perhaps good sense, but he loves life and does his best to live it with zest. One could choose a poorer role model.

Bonus: Rivers Parting – Shirley Barker. I have mentioned this wonderful historical novel before, but I add it here simply because it’s a well written book by a talented poet whose career was stunted by Robert Frost. Our consolation, if not hers, is that she wrote some lovely historical novels such as this one.

So that’s a sample of my comfort food reading. I encourage one and all to offer examples of their own literary comfort food in the comments area. What books do you go to when you need to refuel?