War and economics: where is Bernie Sanders’ 12th step?

There’s much to like about Bernie Sanders, but can he really help us kick the war habit?

Occupy Democrats and US Uncut have a handy macro going around that highlights Bernie’s 11 point economic agenda. It’s big. It’s important. It’s to be lauded. And if we’re not to have Bernie, it’s to be emulated. But we’ve also seen the devastating effect war has had on our economy, to say nothing of the lives lost to our wayward military adventurism. Below you’ll find my own reasons for supporting this 11-point economic plan as well as some serious consideration of his missing 12th point. 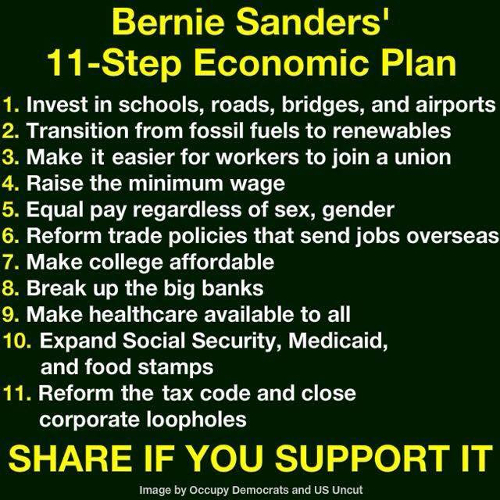 1. Good for society, good for trade, good for business, and jobs, jobs, jobs. Business won’t do it, and if they do, you’d just see never-ending, ever-increasing tolls everywhere for everything. States won’t do it, because if they would they’d already be doing it. Someone’s got to. Or maybe we should just caption our flag, “Third World Hellhole.”

2. a) Good environmental stewardship. b) We can only produce so much coil, oil, and natural gas here. Not doing this just keeps us beholden to nations who, by all rights, would otherwise be enemies. Consider new/old reports of Saudi funding for 9/11.

3. I’ve got mixed feelings about unions, but no mixed feelings about workers. When’s the last time a business, left to its own devices, actually gave its workers a fair shake, after all? And consider…businesses fund the constant assault on unions. Can’t have workers getting together to negotiate as a group for a more fair slice of the pie that the company wouldn’t have without them. But businesses fund lobbyist groups (call ’em trade organizations if you will) so they can “collectively bargain” with government to their advantage. And by collective bargaining in that case, I mean call all the shots and stack the deck against you.

4. We’ve had scare tactics every single time the minimum wage went up. Increases in it haven’t crippled us yet. And consider…for the people that it matters to most immediately, those who would actually get a raise from it, they’re really just what you might think of as an economic pass through. When’s the last time you heard of a poor/working poor person sitting on a stack of money or socking it away in the stock market (like the wealthy can afford to do)? They can’t, at least not at that scale. Money coming in from one paycheck to the next means more that the poor/working poor can and will buy. In one hand, out the other. That’s good for businesses that sell them goods and services. When business is good, more jobs. More jobs, more people spending money. More business. More jobs.

7. Good idea unless we like the idea of all the educated people coming from over there, wherever over there happens to be. If we’re a nation that won’t make anything or build anything, who needs education or skills? We can just roll over and become another banana republic. But hey, that would bring our labor costs down to what China pays, and that could only be good for us, right?

8. Hell yeah. If they’re too big to fail, that means they’ve privatized profit, but socialized losses. Wouldn’t be great if you could make a bad bet in Vegas and have everyone else pay off your losses for you? But they’re also too big to jail. You get busted for so much a shoplifting a candy bar, you might catch some time in the slammer. Bankers who knowingly rip off tax-paying Americans to the tune of billions? Hah!

9. Scary. Know what’s scarier? Not being able to afford care when you or someone you love needs it. And tell ya what, except for the very, very lucky few who will one day die peacefully in their sleep with never a day in the hospital, you know who will need care that will otherwise probably drive you and/or loved ones into bankruptcy? Just about everyone you know, including that person who looks back at you in the mirror.

10. Or, you know, maybe we could just let things stay the way they are, which, if the world is going forward, is like moving backward. Or we could cut programs, because a poor person, young, old, useless, or otherwise, is able to do so much more to better themselves and society if they just have less. Besides, if we’re doing all the other stuff in the list right and wisely, that would actually mean fewer people would need help to begin with.

11. Makes sense to me. Someone who makes money here shouldn’t get a free pass on taxes just because they’re rich enough to figure out how. Our tax system was written of, for, and by tax cheats. Who’s that working out for best?

12. Oh, wait. We’re NOT hearing about one of our biggest financial sink holes and one of the prime reasons that sinkhole is so economically devastating.

I can’t help but to notice that none of the Sanders macros I’ve seen have the nards to talk about his foreign policy, which worries the shit out of me at least as much as it does for all the other candidates. In particular, his pro-Israel stance doesn’t get hyped much. I get being pro-Israel. I don’t get being pro-Israel at all costs. Israel, as an ally, is like having a mean younger brother that knows they can pick as many fights as he wants because Big Brother America will always have his back. That just pisses off more and more and more people against us. I’m not saying throw Israel under the bus, but we need to figure out some way to convince them to stop stealing land outside the 1967 borders, and to stop killing thousands of Palestinians at a go, including women and children, because a relative handful of terrorists takes a handful of Israelis out. Maybe not giving them $3 billion a year, no questions asked, no qualifications would at least be a good start. They want to pick fights? Let them duke it out.

Oh, lordy. I went there. There’s a reason for that.

Imagine with me, for just a moment. It’s some year in the future. The big global powers that be, let’s call them Great Britain, have decided they really screwed the Native Americans with colonialism and those people now deserve their own homeland. Back, even. Small problem. You’re already living on it. That’s okay. Some Native American terrorists (as I’m quite sure you’d see them at that point) and TPTB just roll in, bulldoze your homes, take your land, and kick you off or kill you. Now the original inhabitants get to live in peace and harmony with you, don’t they? Not like you’d hold a grudge. You would? Then you understand why so much of the world resents us for our one-sided support of Israel.

That’s largely what keeps the region destabilized, and part of what keeps us tied to so-called allies like Saudi Arabia, ruled by one of the most barbaric and repressive regimes in the world who hold oil over our head and bankroll attacks on American soil. That keeps us fighting against tyrants like Assad in Syria by funding “rebels” who turn out to be al Qaeda, al Nusra, ISIS/ISIL, you name it. If we look back at our foreign policy in the Middle East for the last 50 or so years, we can see that what we do doesn’t work. So why keep doing it, unless we mean to make the arms dealers who sell to both sides rich?

Does it seem like too much of a leap to jump from unequivocal support of Israel to the rest of those unrelated points? Try pulling any string in that tapestry of bloodshed and see if Israel doesn’t get a run in it.

On the larger point of war and foreign policy in general, where’s Bernie (or, for that matter, your favorite candidate) on Russia? China? North Korea? Central and South America? Africa? Do we keep picking wars to wage based on profit and what the area has for us if we win? Speaking of winning wars, remember the last one we won since WWII? Of course not. We haven’t. We haven’t because most Americans have lost the taste for waging war for someone else’s profit. We don’t have the political will to wage winning wars. Winnable wars are big, expensive, brutally bloody things, not something conducted with only a relative few troops, saturation bombing, and drones. So what about “humanitarian” wars? Where were we when Rwanda was torn apart? How quickly did we turn tail and run when dinky little Somalia was too much for our will to wage war? And that’s just two examples. Nothing in it for us, so either cut and run or leave ’em be. Problem is you end up with Boko Haram and Somali pirates, rogue states, and hotbeds of terrorist recruitment.

Do I have all the answers? Oh, hell no. But there’s three things I can think of that are scarier than me not knowing and opining anyway: 1) a candidate who doesn’t have anything new to offer, 2) a candidate that doesn’t offer anything, and 3) any candidate that says there’s a simple solution to such a complex problem that it’s bedeviled the globe at least since the 50’s, if not longer.

Oh, but the macro is about economics! Find me a modern war that isn’t. If we pick our alliances and engagements more prudently, and stop providing effective immunity to some of the worst tyrants and war criminals in the world, we’d find both financial and humanitarian dividends on a massive scale.