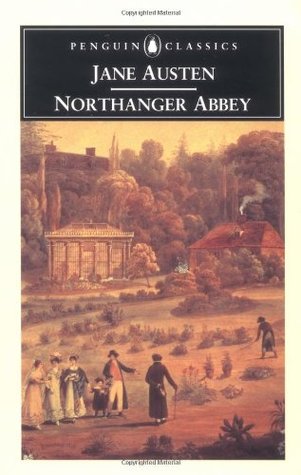 My life as a famous and beloved book essayist has its twists and turns. This week’s particular turn took me north to Maryland where I served in the graduation festivities at the university where I teach. As a result (and because I’m currently working my way through Daniel Forbes’ dystopian satire  Derail this Train Wreck), I’m doing what I warned you I might a week or so ago: writing about Jane Austen’s Northanger Abbey.

Northanger Abbey is probably my least favorite of all great Jane’s works. There are a couple of reasons for this, and you may as well know them. First, it was published posthumously (as was my favorite of Austen’s works, the marvelous and prescient Persuasion about which I will write near the end of this year) although it was the first novel she ever completed. The story behind that is well documented: Northanger Abbey was accepted for publication, but the publisher later decided not to issue the book. Over a decade later – near the too early end of Austen’s life – her brother Henry bought the book back from that same publisher for the same price for which it had originally been purchased. Evidently, that publisher, Crosby and Co., was not known for either editorial or business acumen: in the time between their purchase of the manuscript in 1803 and Henry Austen’s repurchase of the manuscript in 1816 (a mere year before Jane’s death), Miss Austen had published four other novels of which a good publisher ought to have heard: Pride and Prejudice, Sense and Sensibility, Mansfield Park, and Emma. Though published initially by “A Lady,” anyone with an interest in literature or reading knew who the author was – except the fine folks at Crosby and Co. it seems. To get to the point, reason #1 why Northanger Abbey is my least favorite Austen work is that it’s a first novel with a first novel’s foibles: too much self-satisfied obvious authorial voice, too little attention to smoothing out the rough patches, which are numerous.

The second reason why Northanger Abbey ranks last for me among the Austen canon of completed works is that it is, and I say this with the deepest love and affection for Austen, as I have proven repeatedly, (I shudder as I say this) boring. It has, I think, the most in common with the genre of “Regency Romances” that Austen’s work has inspired: an insipid heroine; a blustering, preposterous villain; and a ridiculous plot line that no one, perhaps not even Catherine Morland, that silly heroine, takes seriously. Henry Tilney is, of course, an interesting hero, and one can’t help but like him better than the ridiculously self-effacing Edward Ferrars because he has – to put it in very un-Austen-like terms – the balls to make things right when his father acts like a complete ass to Catherine.

It is also Henry who gives us one of Austen’s first great speeches about acting in a rational way:

If I understand you rightly, you had formed a surmise of such horror as I have hardly words to——Dear Miss Morland, consider the dreadful nature of the suspicions you have entertained.  What have you been judging from?  Remember the country and the age in which we live.  Remember that we are English, that we are Christians.  Consult your own understanding, your own sense of the probable, your own observation of what is passing around you—Does our education prepare us for such atrocities?  Do our laws connive at them?  Could they be perpetrated without being known, in a country like this, where social and literary intercourse is on such a footing; where every man is surrounded by a neighbourhood of voluntary spies, and where roads and newspapers lay every thing open?  Dearest Miss Morland, what ideas have you been admitting?

Catherine, brilliant sleuth that she is (based largely on her reading the likes of Mrs. Ann Radcliffe and nonsense such as The Monk), has formed the – let’s not mince words – idiotic suspicion that Henry’s father, General Tilney, a bluff and abrupt type who has been misled into believing Catherine a wealthy heiress and so a suitable match for her son Henry, is a murderer who has killed his wife – Henry’s mother. Henry in the above passage takes her to task and sets her aright (or tries to) about his father. The General is a gruff sort and ambitious for his children, but he is no monster. Because he loves her despite her foolishness, her naivete, and he blundering, Henry does what must be done – he awakens her sense and crushes her Gothic illusions of mystery and horror in a  short, commonsense speech. That’s the high point of the novel.

The other significant characters – the Thorpes, Isabella and John, despicable characters on the order of Lucy Steele in Sense and Sensibility and Henry Crawford in Mansfield Park – are but early versions of those better delineated characters from the later novels. John Thorpe is despicable in the best Austen tradition, but he is done better (and more dangerously exciting) as Willoughby, Wickham, and the above noted Crawford. The grasping, manipulative, heedless Isabella appears again in more fully realized form as the aforementioned Lucy Steele, the insidious Mary Crawford in Mansfield Park, and that apotheosis of the heedless sociopath, Lydia Bennet.

Northanger Abbey suffers most when Austen, always a master of the understated dig, steps outside the narrative to offer up her 23 year old wisdom. She’s self-indulgent to the point of annoyingly certain herself at times – as here when she observes about Catherine:

She was heartily ashamed of her ignorance – a misplaced shame. Where people wish to attach, they should always be ignorant. To come with a well−informed mind is to come with an inability of administering to the vanity of others, which a sensible person would always wish to avoid. A woman especially, if she have the misfortune of knowing anything, should conceal it as well as she can.

Another version of this same speech, put into the mouth of Charlotte Lucas to explain to Elizabeth her decision to marry the pompous and preposterous Collins, turns this viewpoint on its head – and causes speaker, listener (Elizabeth Bennet, the most intellectual of all Austen heroines), and reader to wince.

Still, Austen reminds us of this:

It is only a novel… or, in short, only some work in which the greatest powers of the mind are displayed, in which the most thorough knowledge of human nature, the happiest delineation of its varieties, the liveliest effusions of wit and humour, are conveyed to the world in the best-chosen language.

And Northanger Abbey is full of brilliance. As a harbinger of the works of genius to follow it, one would be hard pressed to find its equal among the oeuvre of other literary giants. Weak in comparison though it might be to the later Austen novels, it shines with Austen’s trademark wit and insight into human nature. That makes it, one might argue, more than good enough.