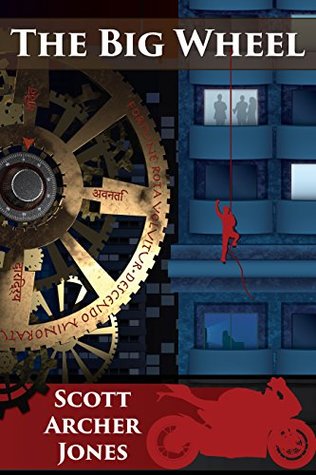 Last year I reviewed Scott Archer Jones’s first novel Jupiter and Gilgamesh. A key theme I noted that made that novel of particular interest was its main character’s quest for his identity and the struggles he goes through to complete his quest.

Interestingly, that same theme pervades his second novel, The Big Wheel. That in itself might not be that noteworthy except that while Jupiter and Gilgamesh was clearly a work of literary fiction, The Big Wheel is a genre work, a techno-thriller with cyberpunk elements. But as with his previous novel, Jones explores issues of identity and understanding of the self, albeit in this latter case via a convoluted, almost Freudian version of the Jekyll and Hyde story. What makes The Big Wheel notable is not its well structured caper/chase narrative; what makes this novel notable is that theme of quest for identity.

The plot of The Big Wheel concerns the theft of a storage device (actually several storage devices). What differentiates one of these devices, however, from the others is that instead of the corporate secrets of a business mogul/politician named O’Brien, one device, a specially constructed cube, has allowed O’Brien to download and save his consciousness, perhaps his soul. The thief, one Robko Zlata, will remind one of a couple of characters, one Henry Case of Neuromancer, the other Raskolnikov of Crime and Punishment. Zlata’s fascination with his craft and his belief that he can triumph over impossible odds aligns him with Raskolnikov; his damaged personality and his drug addictions will remind one of Case. Zlata’s theft of the “artifact,” as it’s called, unleashes a vast response from various of O’Brien’s tentacles: his standard security apparatus, his illegal private army, and his corporate raider division.

From that last group comes the novel’s other major protagonist, Thomas Steward. Steward is a character whose dedication to his career has left him in search of his own identity, much like the character Matt Devon in Jupiter and Gilgamesh. Steward is motivated in his pursuit of Zlata by different aims than the dutiful Garland, head of corporate security, or the murderous LeFarge, head of O’Brien’s private army. Steward realizes, as he begins to gather information about Zlata, that in order to catch up to the thief he has to learn how Zlata thinks, how he lives. In the pursuit of that information, Steward tries living like Zlata, even developing similar drug habits and affectations of dress and behavior. This behavior allows Steward to find Zlata, but it also brings him into conflict with the sociopathic LeFarge and the equally brutal O’Brien. The consequences are, as to be expected, in some cases bloody and horrific, in other cases left handedly merciful, but they eventually lead to a sort of rough justice for all the novel’s important characters.

For the insightful reader, further parallels between characters from Dostoyevsky, Gibson, and perhaps even Stevenson will reveal themselves, making The Big Wheel a richer, more rewarding reading experience than the typical techno-thriller or cyberpunk dystopian novel. Thomas Steward’s search for himself even as he searches for Robko Zlata reveals an essential truth that any great search narrative reveals: even as we search of the one we think our opposite, we find ourselves. As Baudelaire tells us, “Tu le connais…ce monstre délicat/…mon semblable, mon frère!” Scott Archer Jones reminds us that whether 19th century Russia or 21st century America, to know ourselves we often must come to know others.