Four errors of fact, two innuendos, one serious distortion, and one uncredited image, any one of which should render an editorial unpublishable. Yet the Gazette’s editorial contained all of them.

On April 23, the Colorado Springs Gazette published an editorial titled “Stop ‘global warming’ hysteria.” In a 560 word editorial, the Gazette made four serious errors of fact, failed to credit the source of an image, repeated a distortion, and made two innuendos about global warming data, science, and scientists. To say that this is disappointing is an understatement. Readers expect their newspapers to provide factually accurate information, and the fact that the Gazette won the 2014 Pulitzer for National Reporting just makes this editorial failure that much worse.

What follows is S&R’s detailed review of the many failings of the Gazette’s editorial.

The Gazette editorial makes four serious errors of fact which indicate that the Gazette failed to fact check their editorial. The first factual error is their allegation that the federal government “spends $22 billion a year fighting global warming, which is twice what it spends on border security.” While the Gazette does not provide a link to their source for this incorrect claim, S&R has seen it before. Specifically, it was first made by Michael Bastasch of the Daily Caller on October 28, 2013. When S&R fact-checked Bastasch’s claim, we found that it was factually incorrect. Bastasch’s claim rests on a superficial reading of the Department of Homeland Security’s fiscal year 2014 Budget-in-Brief. Specifically, S&R found that Bastasch’s article

ignores three other DHS organizations that play a significant part in customs and border protection – Immigration and Customs Enforcement (ICE), the U.S. Coast Guard, and the U.S. Citizenship and Immigration Services (USCIS). In the description of ICE in the DHS budget, it explicitly says that ICE enforces “approximately 400 federal laws governing border control, customs, trade, and immigration.” (emphasis original in S&R post)

Including these additional organizations would boost the budget for “border security” to just over $31 billion.

Furthermore, S&R’s review of the Fiscal Year 2014 Report to Congress on Federal Climate Change Expenditures found that there are a significant number of programs that are tracked as climate change expenditures that are not explicitly climate-focused. For example, studies into wildfire risk by the Department of Agriculture, weather forecasting and disaster preparedness by NASA, and nuclear power research by the Department of Energy are included in the $22 billion claimed by both Bastasch and the Gazette. Simply put, the dollar amounts for border security are significantly too low and the dollar amounts for climate change expenditures are significantly too high.

Global warming regulations do not cost the US economy $1.75 trillion per year

The Gazette editorial’s second error of fact is the allegation that “the annual cost of global warming policies at $1.754 trillion each year.” While the Gazette again failed to provide a link for this claim, they referred to the source as “Forbes columnist Larry Bell.” When S&R fact-checked this allegation, we found that Larry Bell is not a Forbes columnist, but rather a blogger at Forbes who, according to his bio, is a professor of space architecture at the University of Houston and who has no apparent expertise in either climate science or economics. However, the larger problem is that Bell himself is not the source of the allegation, a point that the Gazette should have identified during their own fact-checking.

Bell’s blog at Forbes refers to, but does not actually link to, a study by the United States Small Business Administration (SBA) that supposedly makes the $1.754 trillion claim. S&R Googled the SBA and the number in question and found the original SBA study from September 2010 titled “The Impact of Regulatory Costs on Small Firms.” In our review, S&R found that the $1.754 trillion impact quoted by Bell is actually what all federal regulations combined cost the US economy. Of this, the combined costs of all environmental regulations is $281 billion, as seen in Table 6 (see below) of the SBA study.

Table 6, “The Impact of Regulatory Costs on Small Firms,” September 2010

The cost to businesses is even less. According to Table 13 in the study, businesses are only expected to pay $183 billion of that total, with the rest borne by individuals and state and local governments.

Table 15, “The Impact of Regulatory Costs on Small Firms,” September 2010

And finally, the SBA article has no information on how much money is spent complying with only global warming-specific regulations. This level of detail simply isn’t available in the study.

The third error of fact in the Gazette’s editorial is the incorrect claim that “NASA reports the world has warmed .36 degrees over the past 35 years.” In reality, every single one of the surface temperature datasets and both satellite datasets show more global warming than 0.36 degrees, Celsius or Fahrenheit. 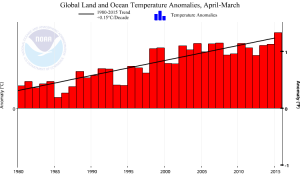 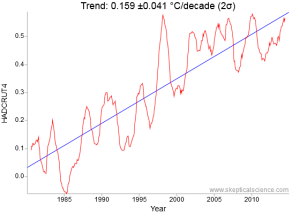 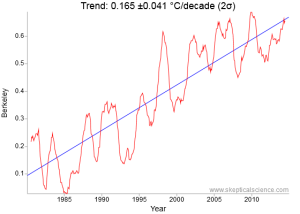 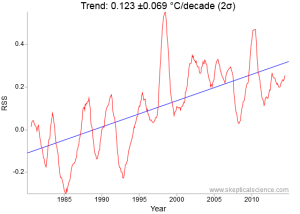 The Gazette’s fourth error of fact is that they incorrectly claim that “since 1998, global temperatures have gradually cooled.” This is not the case. All of the surface temperature data sets (GISTEMP, NOAA NCDC, HADCRUT4, BEST) and one of the two satellite data sets (UAH) show that the trend from January 1998 through the most recent month available (usually March 2015) is positive, showing continued albeit slowed warming since 1998. Only the RSS satellite dataset shows cooling. Both the RSS and UAH satellite datasets are measurements of a large chunk of the lower troposphere (from the surface to approximately 10 km altitude), so they’re not directly comparable to the surface temperature datasets. 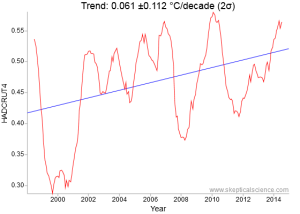 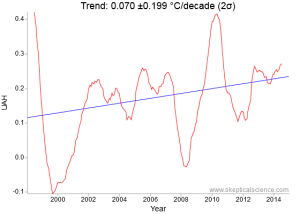 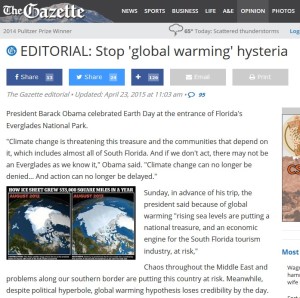 The Gazette editorial also distorted several regarding Arctic sea ice. Specifically, the Gazette posted an image on their website that appears to be an uncredited copy of an image published in an article by David Rose for the Daily Mail on Sunday in September 2013 (image at right). The Gazette editorial also claims that “NASA satellite data show the ice cap has grown by as much as 63 percent in recent years.” This claim is unsupported, but given the uncredited image, it’s likely that this claim comes from another David Rose article from August 2013 (again without linking or credit).

In this case both Rose and the Gazette are distorting the facts. S&R generated the following images using data collected by the National Snow and Ice Data Center (NSIDC), and both show clear downward trends. While it’s accurate to say that there was much more Arctic sea ice in August 2014 than there was in August 2012, the trend for sea ice is unequivocally down. And looking closely at the data shows that there was a major jump in sea ice between August 1995 and August 1996, yet the trend toward less sea ice continued in the following years. 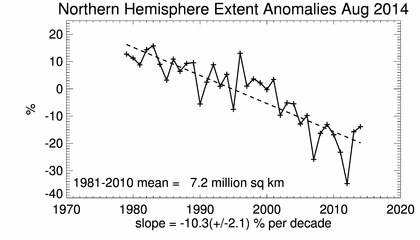 The Gazette editorial team failed to credit the Mail on Sunday and Rose for the image and the claims about Arctic sea ice. Whether these rise to the level of plagiarism or copyright infringement is beyond S&R’s expertise, but both suggest a momentary breakdown of the Gazette’s journalistic ethics.

Unfortunately, the Gazette’s ethical issues with respect to this editorial did not stop with Rose’s Arctic sea ice. In addition, the Gazette made two unsupported claims that amount to nothing more than innuendo. First, the Gazette said that James Taylor of the Heartland Institute wrote a “Forbes article” that “blew the lid off a widely cited paper claiming a 97% ‘scientific consensus’ about a human-caused global warming crisis.” The Gazette again fails to provide a link to the reference article, but this time S&R was unable to determine which of Taylor’s many consensus articles the Gazette was referring to. Taylor has written so many articles on the global warming consensus that it’s impossible to know which one the Gazette was referencing without an explicit link.

Taylor has been attacking polls into the nature and strength of the scientific consensus on global warming since at least 2010, when he came to S&R’s attention. Since then, S&R has found repeated examples of distortions and dishonesty in Taylor’s articles, including one case where the authors of a study explicitly corrected him and yet Taylor doubled-down on his dishonesty rather than correct his article. Given how long Taylor has been writing on the subject of global warming, it’s unlikely that his distortions and deceptions are indications of incompetence. Given his unethical behavior, it’s unwise of the Gazette – or indeed any news organization – to trust anything Taylor writes without first fact-checking it extensively.

Second, the Gazette used quote mining to smear NCAR scientist Kevin Trenberth. The Gazette referred to the Climategate emails, but without using that common name, instead referring to them incorrectly as a “series of leaked emails.” According to the Norfolk, UK police in 2010, the emails were hacked illegally, not leaked. And the Gazette fails to mention that none of the eight independent investigations found any scientific misconduct. This fact runs counter to the Gazette’s editorial narrative that one of Trenberth’s emails in 2009 demonstrated “skepticism about the [global warming] hypothesis.”

The email in question says, in part, “The fact is that we can’t account for the lack of warming at the moment and it is a travesty.” Trenberth is not expressing skepticism of the existence of global warming, but rather pointing out that there are scientific questions about where all the energy is going. As of 2009 there hadn’t been enough research to determine where the missing energy is going. As of 2015 there has been much more research into where the energy has gone in the Earth’s climate system and multiple possible explanations for the lack of global warming have been discovered. Trenberth himself identified the deep oceans as a likely resting spot for as much as 30% of the missing warming in a paper published in 2013.

In the process of making their innuendo about Trenberth, the Gazette references a Newsmax article. Specifically, the Gazette wrote that “Newsmax reminded us this week about a series of leaked emails….” When S&R went looking for this Newsmax article, we found only one article containing Trenberth’s email published during the week of April 19-25, an article titled “The Cold Truth Initiative,” written for Newsmax Finance by former University of Florida chemist Tom Luongo. S&R identified a significant number of similarities between the Gazette editorial and the Newsmax article:

The Newsmax article is 7600 words long. The last 1600 words, however, are exclusively sales pitch. Luongo wants his readers to join the “Cold Truth Initiative” and spend $4.95 to get a copy of a book (“a $29 value”), a survival guide (“a $49 value”), and so on. And if you click on the link, you can sign up, get your books and videos, and if you fail to cancel on time you’re locked in to a year of Luongo’s publication (via Newsmax) for $97.95 for a year. For all intents and purposes, Luongo’s Newsmax article is an infomercial.

Four errors of fact. One serious distortion. One image posted without credit to the original source. Two unsubstantiated innuendos. Any one of these issues should render any editorial unpublishable. Yet the Colorado Springs Gazette published a single, 560 word editorial that included all of them. At best, this editorial represents a massive failure of quality control by the Gazette’s editorial board. At worst, it shows that the Gazette’s editorial board has abandoned its journalistic integrity on the subject of global warming. For a publication that won a Pulitzer for National Reporting in 2014, either failure demonstrates that the Gazette has fallen far from grace.