Jean-Paul Sartre: Words with Friends – and Enemies – and, Well, Everyone…

“For a long time, I took my pen for a sword; I now know we’re powerless. No matter. I write and will keep writing books; they’re needed; all the same, they do serve some purpose. Culture doesn’t save anything or anyone, it doesn’t justify. But it’s a product of man: he projects himself into it, he recognizes himself in it; that critical mirror alone offers him his image. ” – Jean-Paul Sartre 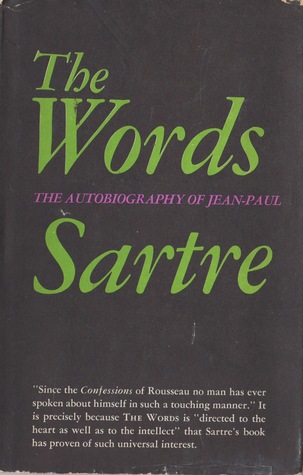 Back to the 2015 reading list for a book I did not expect to like and have found myself  liking a great deal. Jean-Paul Sartre’s The Words (Les Mots) purports to be an autobiography, albeit a most limited one: written when the great Existentialist was in his late 50’s, The Words covers only the first ten years of Sartre’s life. But, as we shall learn, the first ten years of the life of one like Sartre, sifted through the the mind of one like  Sartre over 40 years later, is no ordinary autobiography. As one can and should expect from Sartre, it’s part memoir, part philosophical inquiry, and part pretentious bullshit disguised as profound insight.

Sartre the memoirist is a rather sad sort of fellow, which might be expected given that his father died when he was two and the loss of a parent is painful at any age, bewilderingly so when one is so small as to have no solid memories of the lost one. For Sartre, this “lost one” is a father who was a naval officer (and whose one expressed desire, it would seem, was that his son not become a naval officer) and from who Sartre acquired his short stature (J-P was only five feet tall) and who, for Sartre, is more important for his absence than in any other way. The absence of his father and the indulgence of his mother and grandfather (Sartre notes that his grandmother is more critical and insightful that the other two though he doesn’t give her due credit for her influence on his own critical bents.) made him, Sartre claims, have to create himself with his mind as a sort of a self-birthing Athena:

Everything took place in my head. Imaginary child that I was, I defended myself with my imagination…. I had made a false entrance; I withdrew behind a screen and began my birth over again at the right moment, the very minute that the universe silently called for me.

All this he did, by the way, between the ages of six and nine. And what were you doing at that age, gentle reader? One suspects it was not determining the right moment for your entrance into the universe.

The way that Sartre accomplished this feat of – self-generation, I suppose we could call it – is by learning to read. Books – and their component parts, words – became the clay from which Sartre could mold his – well, his Sartre:

It was in books that I encountered the universe: assimilated, classified, labeled, pondered, still formidable; and I confused the disorder of my bookish experiences with the random course of real events. From that came the idealism which it took me thirty years to shake off.

That molding, the shaping of the creature who became Jean-Paul Sartre by little Jean-Paul Sartre, despite his protestations, is reminiscent of an act of will worthy of another philosopher whom one suspects Sartre would not have much good to say, Nietzsche. He says himself:

I keep creating myself; I am the giver and the gift.

But the middle-aged Sartre, the Existentialist, cannot help but negate this:

All children are the mirror of death.

The resultant conclusion, Sartre would argue, is that knowing we are mortal, our only chance to live is to accept our mortality and do what we must do (in his case, that means writing) with seriousness and purposefulness. Anything that distracts us from this pursuit of what we must do is to be shunned. This, we might conclude, explains why Sartre is the only writer to decline voluntarily the Nobel Prize for literature. Some critics doubt his motives, however, and see his Nobel refusal as part of a lifelong act.

And that brings us to that third part of The Words – the pretentious bullshit part. It’s that which comes out in his “critique” of the technology/art form just emerging during Sartre’s childhood (he was born in 1905): the movies. Here he is condescendingly describing the movies in comparison to “the theater” (say those words to yourself as Danny Kaye does in “Choreography” number from White Christmas and you get my drift):

We blindly entered a century without traditions, a century that was to contrast strongly with the others by its bad manners, and the new art, the art of the common man, foreshadowed our barbarism.

And here he is talking about the same topic, this time using the movies as proof of the decline of civilization:

When many people are together, they must be separated by rites; otherwise, they slaughter each other. The movies proved the opposite…. Etiquette, now dead, revealed the true bond among men: adhesion. I developed a dislike for ceremonies, I loved crowds. I have seen crowds of all kinds, but the only other time I I have witnessed that nakedness, that sense of everyone’s direct relationship to everyone else, that waking dream, that dim consciousness of the danger of being a man, was in 1940, in Stalag XII D.

The movie theater as prison camp – there’s a happy image for us all. But then maybe there is a method to his madness:

Though impervious to the sacred, I loved magic. The cinema was a suspect appearance that I loved perversely [emphasis mine] for what it still lacked. That streaming was everything, it was nothing, it was everything reduced to nothing.

So. For Sartre going to the movies is analogous to being in a prison camp, but movies are a perverse pleasure because they are real and not real at the same time. It’s all about that old “being and nothingness” thing he’s so fond of, one supposes. What all this intellectual contorting amounts to, after all, is that Sartre loved movies but he hated going to the movies. Sadly, he died in 1980, just before the advent of the VCR could have rescued him from this profound philosophical quandary.

In spite of that sort of bullshittery rearing its laughable head at points throughout The Words, I must say, I enjoyed reading this more than anything else I’ve read by Sartre (Nausea, The Flies, No Exit, Being and Nothingness). That could be because it’s the old case of being amused by a guy who can never explain anything simply trying to tell you why he is the way he is. No matter. What Sartre achieves with this attempt at autobiography is something he doesn’t achieve in his other more “profound” work: he gives you some of who he is. He admits this to us here rather charmingly:

…at the age of ten, I had the impression that my prow was cleaving the present and yanking me out of it; since then I have been running. I’m still running. For me, speed is measured not so much by the distance covered as by the power of uprooting.

You have to like a guy who admits that what he’s about is keeping on keeping on, as we used to say back in the misty sixties. Sartre admits to us what all real writers admit – to themselves if to no one else – that he writes because he must; and he must so that he can make an attempt at immortality:

…my sole concern has been to save myself – nothing in my hands, nothing up my sleeve – by work and faith. Without equipment, without tools, I set all of me to work in order to save all of me. If I relegate impossible Salvation to the prop room, what remains? A whole man, composed of all men and as good as all of them and no better than any.

As Wordsworth described a poet as “a man speaking to men,” and as John Lennon described composing as “knocking out a bit of work,” so Sartre spends The Words trying to explain why he does what he does. Maybe he does, maybe he doesn’t. He at least gets at what drives him…les mots….