Book Review: Lost in the Darkness by William Mark

William Mark’s novel is a complex, sometimes convoluted, mix of abductions (both child and adult), sexual perversions, and rogue crusading that makes for a Mulligan stew of equal parts truth and lies, good and evil, and right and justice. 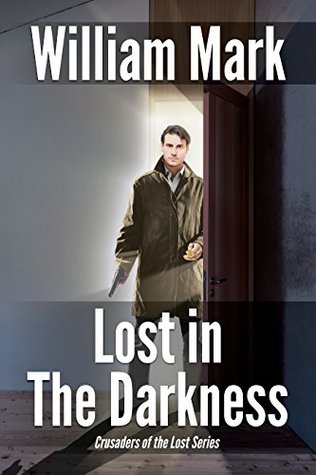 Another break from the 2015 reading list (next up, Sartre’s autobiography, The Words which I’m sure will be a fun romp) for a review of a new book sent me by my friends at Southern Yellow Pine Publishing. This one is a mixture of  genres, mystery, thriller, and crime fiction. It features the classic rogue cop, a beautiful, wealthy and slightly mysterious benefactress, an “A Team” motley crew of secretive, extra-legal crusading do-gooders (funded by that benefactress) whose mission is to find missing children and restore them to their parents, a nosy reporter whose ambition and unscrupulousness might expose the operation and wreck the lives of the crusaders and their benefactress, and, at the heart of the story, a missing child – the son of that rogue cop mentioned above – and a despicable sleazeball pervert of a politician.

As you might guess, unraveling this complicated skein of a yarn takes some time.

As the story opens, Curt Walker, the rogue cop, has been part of the team of crusaders for lost children for two years; his son has been missing for three. He helps the crew rescue a little girl and restore her to her parents, then sinks into the pattern of behavior that has haunted him for some time: drinking to forget and causing the team embarrassment and occasional near disaster. A new member joins the team, a woman named Rachel who is, like the rest of the team, in some way deeply affected by abduction (she and her sister were kidnapped as young teens and her sister has never been found). She and Curt have an immediate spark, despite Curt’s still being married. (The other team members include another former cop named Melinda, a computer nerd, Louis, and a clever if often mocked for her liberal views researcher/actress named Beth.)

The benefactress sends the team on their next mission – to Chicago to follow a lead on a missing child – but they are sidetracked in Vail as they discover a human trafficking ring running a brothel using young Central/Latin American girls. The rescue of the girls goes sideways and Rachel is trapped inside with the brothel’s two vicious operators. Just as she is about to be murdered in classic mob execution style, Curt bursts in and kills first her assailant, then his partner. This action, while clearly justifiable, causes the team numerous complications over the course of the rest of the novel.

Just after these events Kurt, through Louis and his continual monitoring of lost child reports, discovers where his son might be. This event leads Curt from Colorado back to his home in Florida and into a morass of wrong leads, confrontations with the pedophiles holding his son, and eventually to a confrontation with the perpetrator of Curt’s son’s abduction, that perverted and sleazy politician I mentioned above. It’s touch and go for awhile, but eventually with the help of his crusader pals and the protection of his boss, the benefactress, the endangered are saved, the evil repaid by either formal or rough justice, and a happy ending is achieved.

Despite his protestations that he will stay by his son’s side and help his wife Tracy with getting said son, Josh, readjusted to life as a normal human, at the novel’s end Curt has abandoned that noble aim and taken off with the crusaders again. Maybe this was inevitable – Curt, knight errant that he is at heart, may not be able to resist the call to adventure and action that the crusaders represent. Maybe it’s his sense of doing for other lost children what he has done for son Josh that motivates his return to the crew. Or maybe, and this is a less noble but equally probable possibility, Curt’s attraction to Rachel is a motivator as much as anything else. One doesn’t want to believe that last option, but it can’t be discounted. Perhaps Curt Walker is simply one driven by the quest and when a quest is completed he moves on to another quest. The implications for his long term family life of this character trait are not encouraging.

While William Mark, the author, means by this turn of events to let us know that Curt will be part of the next novel in this series, it is a disturbing and slightly dissatisfying ending to what has been a fast paced thriller with mystery. One wishes he’d have saved Curt’s return for the opening of the next book so that he could use that novel’s exposition to lay out plausible reasons for Curt’s decision. But he doesn’t, so what we have to talk about is the novel in front of us. That novel, Lost in the Darkness, is a complex, well paced crime fiction-thriller-mystery with, for this reviewer, a frustrating ending. But we all know my biases, so I think it only fair to say that that complex, well paced comment of mine should outweigh any petty carping I’ve done about the ending. Lost in the Darkness is well worth your time.