Hermann Hesse’s Demian: The Quest for the Self

“I wanted only to try to live in accord with the promptings which came from my true self. Why was that so very difficult?” Hermann Hesse 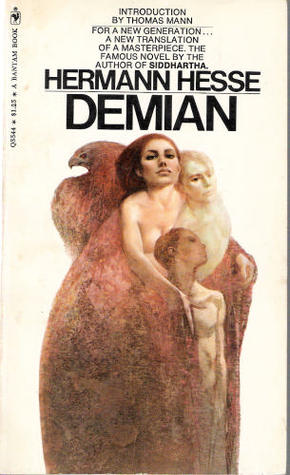 We turn in this next essay from the subtle, Zen inflected musings of Kawabata to another Nobelist, this one a lifelong yearning seeker of self understanding. In the original 2015 reading list I had chosen Hesse’s novel describing an artist’s search for spiritual fulfillment, Rosshalde, as my selection from the novelist whose lasting reputation owes as much to his adoption as spokesperson by the Boomer generation (a mistaken adoption) as to his literary merit (which is real). Instead, when it came time to pull Rosshalde from the shelf, I took it down and thought about how many times I’ve read Siddhartha which is a better treatment of the same themes as the earlier novel. Instead, I pulled out the Hesse novel next to Rosshalde, the lesser known and equally fascinating bildungsroman, Demian.

It turned out to be an interesting choice. I had not read Demian for many years, at least since the mid-seventies. Like most of my generation, I’d read Steppenwolf and Siddhartha as an undergraduate, taken in by the mystique attached to both books: in the case of the former, the “magic theater” section that suggests psychedelia (though there is no proof anywhere that Hesse ever used drugs) and in the latter its fable like retelling of the life of the Buddha. Both were, of course, very groovy, read in those heady times. But by the time I came to Demian I was a young teacher and part-time graduate student and had learned a bit more about the author Hesse besides that he wrote groovy books. I approached this tale of a youth’s search for self understanding, self confidence, and self acceptance in a more critical fashion. My assessment from that reading was that the novel was simply a quest narrative wrapped up in a bildungsroman.

All these years later, Demian is still that.

This later reading of Demian reveals much of what is great about Hesse – and some of what is annoying.

The novel covers perhaps nine years in the life of the narrator, Emil Sinclair (Hesse originally published the book under Sinclair’s name to foil reader preconceptions given that he was already a well known – and sometimes controversial – writer). When we meet Sinclair he is ten years old and has fallen prey (admittedly, through a childish exaggeration about his exploits as an apple thief) to a bully who threatens to expose his act and publicly embarrass both Sinclair and his family. After extorting money and other valuables from the boy for months, the bully, a slightly older ruffian named Franz Kromer, asks Sinclair to bring his sister to their next meeting. Terrified both by the knowledge of what the older boy wants from his sister and by his fear of what is surely the public humiliation that will finally be visited upon him as he realizes he would never sacrifice his sister to the bully, Sinclair runs into a new boy, a mysterious figure named Max Demian. Demian shocks Sinclair by being able to ascertain his troubles easily and, though Sinclair only figures it out later, intervenes for him with Kromer and, by some means never made clear, frees him from Kromer’s tyranny. In that initial conversation Demian also intrigues  Sinclair by explaining to him how, by focusing one’s will, one can achieve any goal one aspires to achieve – as long as one is willing to do what needs to be done:

…you realize, don’t you, that your fear of him [Kromer] is all wrong? Such fear can destroy us completely. You’ve got to get rid of it, you’ve simply got to, if you want to turn into someone decent.

Before one begins to think of Max Demian as a beacon of right living, it is important to understand what lengths he is willing to go to – and suggest Sinclair go to – to overcome fear of one’s enemy:

There’s just one more thing I’d like to say to you since we’ve gotten so far – you ought to get rid of this bastard! If there’s no other way of doing it, kill him. It would impress and please me if you did. I’d even lend a hand.

If one is thinking right about now that Max is a proponent of the idea of the Nietzschean übermensch, one would be correct. And if this tale were the simple story of how a boy became a raving Nietzschean egotist, Hesse would have ended up as a favorite of Herr Hitler instead of having his books burned. But Hesse is a great writer and, as Thomas Mann insists in his introduction to this novel, a person of “hard-won spiritual freedom.” It is not superiority that Sinclair seeks throughout Demian: it is freedom. That freedom is first and foremost freedom from conventionality – of feeling, of thought, of action. Here Demian explains to Sinclair what that might mean:

What is forbidden, in other words, is not something eternal; it can change. Anyone can sleep with a woman as soon as he’s been to a pastor with her and has married her, yet other races do it differently, even nowadays. That is why each of us has to find out for himself what is permitted and what is forbidden – forbidden for him. It’s possible for one never to transgress a single law and still be a bastard. And vice versa.

Much of the rest of the novel is Sinclair fumbling along, struggling with finding his true self, struggling against losing himself in the ways in which people lose themselves – in high talk, for instance. At one point Demian warns him:

Clever talk is absolutely worthless. All you do in the process is lose yourself. And to lose yourself is a sin.

The lesson is lost on Sinclair, however. Later in the novel he is sent away to boarding school and loses touch with Damien – and himself. He falls into drinking and carousing (though oddly, he avoids sex, even though there is clearly ambivalence in the character about this); he is alienated from his family; he nearly is expelled from school. The cause behind all this is Sinclair’s unresolved spiritual/religious issue. From the beginning of their friendship, Damien insists that Cain might not be the villain that conventional religious teaching portrays him to be. He also insists that the problem with conventional [Christian] religion is that it represents only one side of experience the “light and bright” – a clear denial of the “dark” – represented by Satan. One must find a god, Damien argues, who can represent all knowledge, all experience, all existence. In the midst of his existential crisis, Sinclair stumbles upon a church where beautiful, engrossing organ music is being played. He visits several times and eventually discovers the organist, one Pistorius, and befriends him. Pistorius, a failed theology student, serves as his guide. A chance remark about the god Abraxas first brings that deity to Sinclair’s notice. He mentions this to Pistorius who enlightens him further.

[It is worth noting here that Hesse spent a couple of years in a sanitarium and was treated several times for depression. He spent years in psychoanalysis with a fellow by the name of Carl Jung. It was from Jung that Hesse got his ideas about Abraxas.]

Sinclair is able to combine what he learns from Pistorius with what he has learned from Damien and formulate a sort of spiritual understanding that satisfies him – at least for a time. But Sinclair is a seeker and it is only when he goes to university and finds Damien living in the same city with his mother, whom Sinclair finally meets and who  helps Sinclair resolve his sexual ambivalence, that he achieves a sort of homecoming. Frau Eva Damien is both beautiful woman and the handsome Demian in one. (Yes, I know, there’s much to be made of Sinclair’s attraction to Frau Eva Damien. But Jung couldn’t successfully psychoanalyze Hesse, so I’m certainly not going to try.) As Frau Eva tells Sinclair after he has described the arduous quest that has brought him back to them:

It is always difficult to be born. You know the chick does not find it easy to break his way out of the shell. Think back and ask yourself: Was the way all that difficult? Was it only difficult? Wasn’t it beautiful, too?

It would seem that Sinclair’s quest has reached an idyllic end. But while his few months with the Demians is an idyll, forces are at work that change his, Max’s, and Frau Eva’s worlds forever. Max Demian describes the cataclysm’s approach this way:

The world, as it is now, wants to die, wants to perish – and it will…. Oh, perhaps we’ll perish in it. Our kind can be shot, too…. The will of humanity, which our Europe has shouted down for a time with its frenzy of technology, will come to the fore again.

The cataclysm, World War I, does come. Both Sinclair and Demian go for soldiers. At one point, Damien, wounded, finds himself in a hospital bed. Suddenly, mysteriously, as he has done at several points in the past, Damien appears beside him. They bid each other a sort of farewell, and Damien gives Sinclair a kiss – from his mother, as he explains. Afterwards, when he awakes, a stranger is in the next bed. Sinclair concludes the novel this way:

Dressing the wound hurt. Everything that has happened to me since has hurt. But sometimes when I find the key and climb deep into myself where the images of fate slumber in the dark mirror, I need only bend over that dark mirror to behold my own image, now completely resembling him, my brother, my master.

I haven’t really said what it is about Hesse and particularly about Damien that annoys. That doesn’t seem particularly important now. What is important is the breadth of Hesse’s vision:

But every man is more than just himself; he also represents the unique, the very special and always significant point at which the world’s phenomena intersect, only once in this way and never again.

As Thomas Mann noted: ” He has written things…which I read and feel ‘as though ’twere part of me.'”