Yasunari Kawabata and The Sound of the Mountain…

“But a haiku by Buson came into his mind: ‘I try to forget this senile love; a chilly autumn shower.’ The gloom only grew denser.” – Yasunari Kawabata 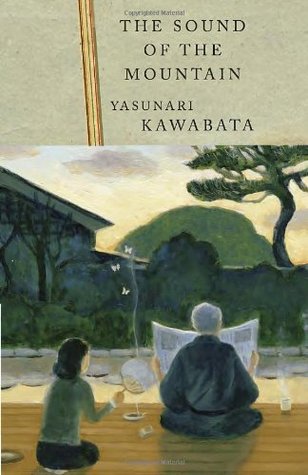 The Sound of the Mountain by Yasunari Kawabata (image courtesy Goodreads)

Reading Japanese Nobelist Yasunari Kawabata’s The Sound of the Mountain, one is reminded of the great films of his artistic contemporaries Yasujiro Ozu and Akira Kurosawa: Tokyo Story and Ikuru, respectively. These two cinema classics, like Kawabata’s novel, deal with the themes of aging, family relationships (particularly parents/adult children and grandparents/grandchildren), and the psychological and philosophical aspects of coming to terms with the end of life. Tokyo Story tells about the trip of an elderly couple to see their beloved adult children and grandchildren and the disappointment they feel when they realize their loved ones have no time for or interest in them. Ikuru (which translates as “to live”) tells the story of an aging bureaucrat who gets a terminal illness diagnosis and attempts to “do something” before he dies that will give his life meaning.

Ikuru appeared in 1952, Tokyo Story in 1953. The Sound of the Mountain was originally published the following year, 1954. This period, short of a decade after the end of World War II, seems to have been a time of bittersweet reflection for members of this generation (Kawabata, Ozu, and Kurosawa were all born within about a decade of each other). In what we Westerners might think of as typically Japanese indirectness, each of these works allows the author (auteur, if one likes, in the cases of Ozu and Kurosawa) to discuss that difficult subject: the lost war’s lingering effects. A  sense of loss felt by a younger generation has made them somewhat heedless – and careless – of their elders. A sense of having somehow failed themselves and their children pervades that older generation to whom the protagonists  of both films and of Kawabata’s novel belong. Of these works, all of which are brilliantly understated and subtle examinations of the human condition, The Sound of the Mountain might be the most understated and most subtle of the group.

The protagonist of The Sound of the Mountain, Otago Shingo, is a businessman in his early 60’s. He married the sister of the woman he was truly in love with, a decision precipitated in part by the love of his life’s early death and by his eventual wife’s slavish devotion to her late sister’s widowed husband and children. Though it is never stated, one suspects that perhaps Yasuko, the sister who married Shingo, was in love with her sister’s husband as Shingo was in love with her sister.

The common factor here is beauty – and , one might add, the yearning for beauty. Yasuko’s sister was beautiful; her husband was also beautiful. Shingo and his wife have “settled”: and it has left Shingo reflective and a little sad as it has left Yasuko indifferent and a little unfeeling. Their son Shuichi, a survivor of the war, has married the young and beautiful Kikuko, about whom he feels ambivalent at best – so ambivalent that he has embroiled himself in an affair with Kinu, a war widow. Their daughter Fusako has had to move back in with them, her marriage to husband Aihara having failed, he having returned from the war a broken man who descends into the fog of alcohol and drug abuse. Fusako has brought two grandchildren, one of whom is beautiful, one of whom is not, repeating the pattern of grandmother Fusako and her sister.

This all sounds a little soap operatic as I describe it, but the quiet dignity and understated suffering of the characters gives the events a haunting quality. From the odd reference or remark here or there the reader gradually realizes that in one way or another, all this loneliness, yearning, and misunderstanding among and between the novel’s characters is indirectly the result of the war. Shingo finds himself regularly riding the train to work or sitting in cafes or walking through Tokyo parks with American soldiers – occupation troops. His confrontation with his son Shuichi over his affair with the woman Kinu as well as his confrontation with Kinu herself over the child she bears – which may or may not be the child of Shuichi – allows both of the younger characters to allude to the suffering the war caused them (Shuichi drinks too much and struggles with his memories; Kinu is an embittered war widow) and to subtly suggest that the role that men like Shingo, whom they believe allowed the country to fall into the grip of war lords like Tojo because it was “good for business” cost much more than he might ever realize in terms of real human suffering – their suffering.

But Shingo does realize. His loneliness and, perhaps, guilt draws him to Kikuko, his son’s beautiful bride. She and Shingo form a deep attachment, one that borders on – but never crosses – the lines of propriety. Whether this is because, as Shingo suggests, he is an “old man” or because of his desire for quiet, peace and family harmony is left for the reader to determine. It even throws into relief the most bizarre act any of the characters in the novel performs: Kikuko’s abortion. She ends her pregnancy possibly as an act of disapproval over Shuichi’s affair with Kinu – but also possibly out of a weird sort of affection for her father-in-law, an affection bordering on the illicit. She even leaves Shuichi and returns to her parents’ home, ostensibly for a visit, but possibly as a separation. It is only when Shingo calls her and asks her to return that she comes back – and the reader is left to mull over whether her return is to her husband or to her father-in-law.

The plot of the novel as offered here does not fully convey the understated, at times Zen quality of Kawabata’s language or the quiet surface below which these strong currents run. That is best conveyed by some samples from the novel. Both the Japanese character, infused with the cultural influence of Zen  and the dramatic form known as No theater inform Kawabata’s prose, as here when he describes Shingo’s first realization that things within his family have gone or are going terribly wrong:

Shingo felt a lonely chill pass over him, and a yearning for human warmth…. And it was if a crucial moment had come, as if a decision were forcing itself upon him.

Here Kawabata offers a near haiku to describe the emptiness of Shingo’s marriage with Yasuko, a marriage made in part simply so that he could be close to her late sister through her:

And the blank left by his failure to speak of so small a thing as a falling chestnut probably stayed on in their marriage.

Shingo, enamored, he realizes, in not always the proper ways of his daughter-in law, finds, in trying to understand Shuichi’s mistreatment of her, insights into his own lonely and unhappy life:

There was an undercurrent running through his life, an abnormality that made Shingo, drawn to Yasuko’s sister, marry Yasuko, a year his senior, upon the sister’s death; was it exacerbated by Kikuko?

Shingo’s secretary Eiko, who is friends with Kinu and with Shuichi, tries to enlighten the father about the feelings of the woman who is having an affair with his son. She brings Kinu’s housemate a woman known only as Mrs. Ikeda, to see Shingo. As she explains, if Shingo would understand the two, he must understand, really understand what the war did to a generation:

Kinu says if she is to give another man [Shuichi] back, then let her have her own husband back. Just bring him back to me alive, she says, and and I’ll let him do exactly as he wants…. Anyone who has lost her husband in the war has to agree. Didn’t we send them off to war? And what are we to do now that they’re dead? He’s in no danger of  getting killed when he comes to see me. I send him back undamaged.

As Shingo tries to gain meaning from the odd behavior of his daughter and her children, he finds himself reflecting on a passage from a No play:

And he has a disconcerting revelation:

Was he searching for the image of Yasuko’s sister even in his grandchildren? The thought made Shingo dislike himself.

Finally he realizes that the searching he seems to find all around him, the searching for happiness, for peace, for human companionship, is as much his own searching projected upon others as it is their searching. He realizes this as he tries to rationalize his more than fatherly feelings for Kikuko:

What was wrong with loving Kikuko in a dream? What was there to fear, to be ashamed of, in a dream? And indeed what would be wrong with secretly loving her in his waking hours…? But a haiku from Buson came into his mind: ‘I try to forget this senile love; a chilly autumn shower.’ The gloom only grew denser.

The novel ends, though, with some tentative steps towards resolution. Fusako asks her father to help her open a shop so that she can provide for herself and her children. Kikuko offers to help her run it. Shuichi and Kikuko seem to be at least in the talking stages of planning another child. And Shingo is planning a trip to his and Yasuko’s home in the mountains to see the maple trees. Both Shingo and Yasuko are genuinely excited by the trip. And both are happy to take Kikuko with them – as their daughter-in law. Life is becoming real and manageable. Shingo, like the reader, has re-integrated himself into life. Like the ancient lotus seeds discussed at several points in the novel, he has endured:

A thousand years or fifty thousand, a lotus seed lives a long time.

Though he will not live as long as the lotus seed, Shingo has learned, perhaps the lesson of Ikuru – he has learned what it means to live.