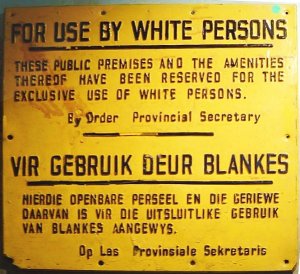 Separate and not equal

Israel’s new Prime Minister, Binyamin Netanyahu, now has a mandate from Israelis to implement his policy: no Palestinian state, and preferential rights for Jewish Israelis.

Let’s be quite clear where that takes you: Apartheid South Africa.

75% of Israel’s population is of Jewish descent; a little over 6 million people. But the overall population of Israel and the Occupied Palestinian Territories is 14 million.

How does he intend to implement this so that he can identify and separate Jewish Israelis from other Israelis?

The first step will be a register of every person in the land to identify them and ensure they are clearly defined. Each person, Jewish Israeli or not, will have to carry a passbook that clearly identifies their population group.

Importantly, since people are now defined, the state cannot permit “mixing” of the definitions, so one of the first sub-rules will be a Mixed Marriages Act that will outlaw such relationships.

Also important, to ensure continued fear between the population groups, will be a Separate Amenities Act. Henceforth, each group will have its own public transport, toilets and other infrastructure.

The whole point of more rights is to use them to benefit yourself. A new Land Tenure Act will ensure that forced expropriation is quite legal and can be used to benefit specific people.

Since there is only one country and it is still necessary to keep the population groups apart, people will have to be physically separated. High walls help but are not absolutely necessary; guns absolutely are.

Once people are clearly identified and separated, the state can ensure preferential access to jobs, as well as gradually reduce the quality of services they provide to those of lesser status.

And then the rest of the Apartheid machine steps swiftly into place. People with lesser rights are usually denied the right to vote. Without a vote, or education or access to decent jobs, it is necessary to prevent rebellion, so the state will need banning orders, the right to detention without trial, and – to give the underclass some form of political motivation – a separate development act that throws them into barren land to fight it out amongst themselves.

I don’t understand the point of this. Self-confident people have no need of such abuse and Israel is a dynamic economy with a technical prowess that is the envy of just about everyone.

Apartheid does more than just the brutality of the oppressed. Such rules are expensive to enforce and turn the state into a massive and corrupt bureaucracy. The business of the state becomes the business of enforcing Apartheid, and given the corruption inherent in such a system, outright theft and embezzlement by people who can never be sanctioned (because they have “special” rights) becomes part of the fabric of government.

In order to ensure enforcement of insane rules the state consumes the economy until the government is part of everything.

South Africa escaped Apartheid at great cost in lives and hope. Worse, even 20 years after the end of Apartheid, the state is still captive to corruption and abuse of state power. The state is too large, its rights too many, and everything dies in its shadow.

Is that really what Israelis just voted for? And for Jews, such as myself, in the diaspora, how do we answer when people ask us: why?