Leasing solar panels and acquiring an electric vehicle helped clear a mental block that had kept me from writing much about industrial climate disruption for about two years.

About two years ago I took a break from regular writing about industrial climate disruption (aka global warming or climate change). My day job was very busy and all the writing energy I usually pour into blogging was, instead, going into my work. By the time I got home at the end of the day I didn’t even want to think about writing again. I’d also become very frustrated with how little recognition my efforts seemed to get. The posts I was the most proud of seemed to be ignored almost completely while the stupid l drive-by posts on a topic of the day would get tons of hits and links. And then there was the fact that much of my topics were being duplicated by others with more time and/or money to write, so it seemed like my niche was rapidly disappearing into other climate focused blogs who were doing it better than I could. All these factors combined to make writing about climate an extremely unpleasant experience.

Recently, though, I discovered that there was something else that was clogging up my writing brain – something that I didn’t realize until the blockage had been removed. I discovered that the fact I hadn’t been really doing much personally to address industrial climate disruption had been a metaphorical ball and chain on my writing. When I started leasing my solar panels from Solar City and bought my Nissan Leaf, that particular weight was removed. 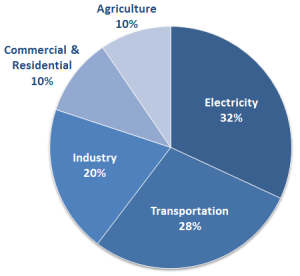 There are things everyone can do to reduce their carbon footprint. Switch from incandescent lightbulbs to compact fluorescents lights (CFLs) or, even better, LED bulbs. Replace aging appliances with more energy efficient units (both electricity and hot water). Weather-strip a home to reduce heating and cooling costs. But more fuel efficient vehicles. Recycle, especially aluminium (refining it from bauxite is very energy intensive). Use a reusable water bottle instead of a disposable one. And on and on.

All of these things are good, and I recommend that everyone who can do them does so, not just for climate reasons but also because they are usually cheaper in the long run and healthier for the community. But they’re not enough. By themselves, they can never be enough. According to an April 2014 report by the EPA, the combined residential and commerical sectors (heating, waste handling) accounted for 10% of US greenhouse gas emissions (all gasses, not just CO2) between 1990 and 2012. But electricity generation was 32% of all emissions, and transportation was another 28%. In other words, if we can’t address how we generate our electricity and move ourselves and goods from place to place, we’re well and truly hosed. 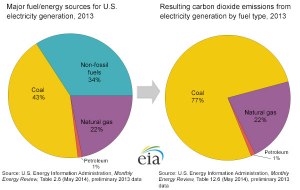 Industrial climate disruption needs collective action because, by it’s very nature, it’s industrial. The largest emitters of carbon dioxide (CO2) in the energy sector are coal-fired power plants. Petroleum dominates transportation. And both coal and natural gas are used by industry (another 20% of emissions) to either generate electricity or heat for processing metals, plastics, and concrete. It takes the actions of companies, voters, and/or governments to transition electricity generation from one energy source to another, because electricity generation is expensive and generators are intended to last for decades. One person replacing incandescent bulbs with LEDs in a home might not have much impact, but if that one person works with 10 others to convince a factory owner to switch all the lighting on the factory floor, that’s a bigger deal. And when voters collectively vote for legislator who in turn vote to impose a renewable energy standard on a state, that’s an even bigger deal.

And I’ve started writing again. Because my writing is one way that I, as an individual, can reach beyond my own home and my employer to help catalyze collective action to deal with the rest of the industrial causes of climate disruption.