The poems of Ou-yang Hsiu reflect both the poet’s refined understanding of the complexities of his life as part of a multi-layered, ritualized culture and his desire to look beyond that culture at the question of being human…. 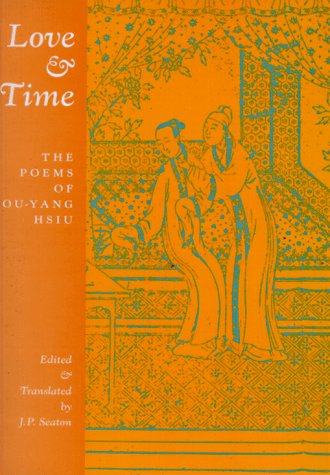 Another look at Asian poetry in this essay, one that might serve as a companion to the work I discussed last week, The Ink Dark Moon.  Love and Time is a collection of the poems of 11th century scholar/imperial official/literatus Ou-yang Hsiu.

Ou-yang was a fascinating figure. A highly principled public official, he helped to implement important reforms that made the Song dynasty’s government more efficient and honest. As a historian he contributed both a history of the Chinese imperial dynasties and promoted epigraphic historical study. It is perhaps as a prose stylist that Ou-yang was most influential as a writer: he is considered a master of the Classical Prose style and is noted for having added a rich expressiveness to Chinese prose, especially to travel writing.

As a poet, Ou-yang was playful and experimental. While he developed mastery of two classic Chinese styles Shi and Ci, Ou-yang, especially in his middle age, expanded the subject matter from the traditional hymns, odes, eulogies, and expressions of romantic desire. Ou-yang added topics such as family life, friendship, drinking wine, and politics. He also played with tone, poking fun at himself and exaggerating for comic effect.

Before we look at the poems, a few words about the translation. This particular translation of Ou-yang’s poems is by J. P Seaton, professor of Chinese at UNC-Chapel Hill and a widely respected scholar and translator. While the translations are, I’m sure, accurate and, indeed, quite enjoyable,  they are more scholarly in feel than those done by Hirschfield and Aratani. What I mean by that – well, I think what I mean is that where Hirschfield and Aritani tried to find the poetic equivalent in English of the Japanese of Kamachi and Shikibu, Seaton focuses, it seems, on the correct English language equivalent of Ou-yang. And I realize as I write this that I may have explained the difference between translation by a scholar and translation by a poet.

To the poems. The best way to enjoy Ou-yang is to meander through the poems as one might through a formal Chinese garden. Here is Ou-yang describing traveling home from a journey:

Returning in the Moonlight to Huang-Hua

Joy’s in the sound of the spring up the cliff,
evening late the mountains quiet.
Pines, in a wash of moonlight,
as thousand peaks, a single hue.

And here he captures the sense of letdown one feels after a holiday:

Swallows return here
to cold heights to dart through flying waters.
My friends gone, my heart sees them:
a flash of pure brilliance, glistening, long.

The seasons offer Ou-yang rich fodder for his reflections on the passage of time:

I Love the Hues of Early Spring at West Lake

I love the hues of early spring at West Lake/Winter snows just melting/you can see the plum there, blooming, small/Then, the flicker of the shadows of clouds and that time’s glow/Now few blossoms remain to light green shade.

Yet you may find in these remaining flowers one more smile/So too in the lute song, captive of beauty, embracing…/I’m old, these gusts of feeling shouldn’t rise/I depend upon you to tip the flowing bowl once more.

They also make him reflect upon the joys of living in the present:

All Day Long Along the Curling Dike

All day long along the curling dike we sail in painted skiff/in the misty grass the wind soughs, distance, the sunlight’s on the river-waters mount blue heaven/Wind, waves, wrinkle, flowering mallow festoons the oars/Beauties flutter beauty as they sing, and startled ducks fly off in pairs/Come drain the golden cup…don’t think of the past and grow weary.

And the timelessness of the contemplative:

Sound of the Bell as We Ford the Cold Stream

Sound of the bell as we ford the cold stream/together searching for cloudy peaks/then follow the lonely on down/glancing back at the towering grove/Pure sutras sound, distant, still audible/Sunset: the empty mountain’s song.

These are the poems meant to be enjoyed as one would enjoy a fine bottle of wine. One should savor them at leisure, enjoying their subtle shadings and appreciating the artistry that made them.

Here’s one parting poem, one that speaks to a mountain wanderer such as I:

Mountain colors, up close, far off, all day going as I gaze at the crags/Different peaks in view from every different place/I will not know their names.