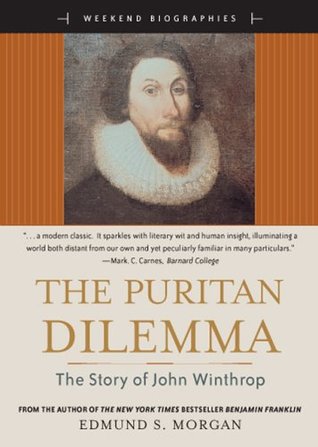 The other “outlier” from the 2015 reading list is a brief (less that 300 pages, a mere glance by scholarly biography standards) biography of a founder of Massachusetts Bay Colony (and its multiple term governor), John Winthrop. As I mentioned in my discussion of this year’s list, I picked up this interesting volume before hitting upon the “global/local” reading plan. And so it becomes the second book essay of 2015.

Over the last three years I have read Williams Bradford’s history of the Plymouth colony, Ed Southern’s compilation of accounts of the Jamestown colony, and now this biography of Winthrop which serves as an account of the first two decades of Massachusetts Bay Colony. The Puritan Dilemma: The Story of John Winthrop, however, is a somewhat different sort of book from those other two in a couple in interesting (and significant) ways: first, it is an apologia of John Winthrop’s life and career, and by extension for the Puritan experiment. Yet it’s also an apology of sorts, or maybe a wistful expression of regret, by Professor Morgan to Winthrop that somehow historians have not treated him as kindly – indeed, reverently – as they should.

The early chapters of The Puritan Dilemma cover, as quickly as Morgan believes he can get away with, Winthrop’s birth, upbringing, education, and embrace of Puritanism. He’s anxious to get us to the meat of Winthrop’s life and career: his decision to leave England and help found a colony at Massachusetts Bay. Morgan labors over this section of the book (rather more than one would like, in truth) recounting – and to some degree rationalizing – Winthrop’s decision to leave England when he was such a staunch opponent of Separatism. It takes a bit of intellectual contortion for Morgan to put over the idea that Winthrop and the other members of the Massachusetts Bay Company who left for their colony did so with every intention of maintaining ties to the Church of England and to the monarchy of Charles I.

Winthrop is, of course, best known for his vision of Massachusetts Bay Colony as the “city on the hill,” the New Jerusalem. Morgan’s explanation of Winthrop’s ideas concerning the relationship of church and state reveal more about Morgan’s own conservative views of historiography than perhaps he realizes. Here he quotes from Winthrop on the justification of a government run by the advantaged:

God Almightie in his most holy and wise providence hath soe disposed of the Condicion of mankinde as in all times some must be rich some poore, some highe and eminent in power and dignitie; others mean and in subjeccion.

Winthrop further avers that “the people” are unfit to rule because the “best part” of them was “always the smallest” and because:

…that best part the wiser part is always the lesser.

Morgan doesn’t express the sort of reverential approval a contemporary conservative might for such sentiments. He goes on to point out that Winthrop is one of the earliest supporters of extending the franchise (such as it is – Massachusetts Bay was a republic with limited franchise at best). And the limitation of franchise is not merely the typical sexism or racism. It is the limitation one would expect from a Puritan leader:

…for time to come noe man (emphasis mine) shalbe admitted to the freedome of this body polliticke, but such as are members of some of the churches within the lymitts of the same.

What feels problematic is not that Winthrop engages in this sort of religious litmus testing in allowing the franchise – that is, given what we know about the Puritans, to be expected – it is that Morgan sees this, even with its elitist limitations, as a wonderful openness to democratic ideals.

The problems that occur in the colony, however, are not simply reflections of the limitations that Winthrop and his fellows place on access to power. The two most famous cases concerning Massachusetts Bay are not about political power, democracy, or fair representation. They are challenges to religious doctrine.

In the case of Roger Williams, a sort of “Puritan’s Puritan,” Winthrop is faced with his own doctrines run amok. Williams’s critiques of  the Massachusetts churches all run to the same thing: no one’s practice of faith is pure enough. Winthrop’s solution? Get him the hell out of Massachusetts. Don’t agree with the status quo? Here’s your hat, what’s your hurry? Morgan admits that Winthrop had to make a calculated political decision to eliminate one espousing the “unacceptable” doctrine of Separatism. The decision, in essence, was to pay Williams off (by giving him lands) so he would go away. And thus we have Rhode Island. A different city on the hill, I suppose. It’s hard not to think that Williams won, however, no matter how Morgan tries to paint Winthrop as problem solver. The Separatist got his own separate colony.

The case of Anne Hutchinson is more complicated – and more reflective of the inability of a doctrinaire like Winthrop – and an admirer like Morgan – to paint a rosy picture of Winthrop as a wise and benevolent leader. Hutchinson, whom Morgan describes at one point as causing Winthrop to engage in the “least attractive episode of his career,” Morgan describes as a 17th century Nihilist. What she did to deserve this appellation was to debunk – or at least demonstrate , seriously or not – that the doctrine of predestination naturally led one to a kind of antinomianism – to nihilism. This, the belief that what one did or how one acted mattered not at all because salvation was an act of God’s grace, undercut all that Massachusetts Bay’s rulers held dear in keeping colonists in line. As a quasi-theocracy (ministers had no civil power but were regularly called upon to “consult” on civil matters), Hutchinson’s teaching – that one either had grace or didn’t (and she went further and stated that almost none of the Puritan ministers had grace) – made following their teachings and obeying their admonitions purely a matter of choice. Such a view also precluded the need to obey civil authorities – such as Winthrop. As a result, despite the fact that during her trial she thoroughly trounced her interrogators, Hutchinson eventually overplayed her hand – offering her own views as she saw herself as one “under a covenant of grace” rather than “under a covenant of works.” She ended up aiding the wish of the Puritan leaders, Winthrop chief among them, and in the end was exiled first to Rhode Island, then to New Amsterdam where she was massacred by Indians, a fate Winthrop would likely have seen as just – though his own colony’s threats to take over Rhode Island are what motivated her family’s move to New Amsterdam.

It is good, one can suppose, to have God on one’s side. And to have the God one agrees with is even better, one can conjecture.

After these controversies Winthrop followed the English Civil War with some concern. His own decision to remain in Massachusetts even when encouraged to return to England by Puritan friends suggests that his devotion to the idea of a New Jerusalem was sincere. And he certainly managed relations with the Puritan dominated Parliament of the period well. In what was surely another of histories oddities, Winthrop died in March 1649, likely without hearing that Charles I, whose actions had been a prime motivation for his move to Massachusetts, had been executed by his Puritan peers in England under the leadership of Oliver Cromwell. Morgan makes no mention of this irony at the end of this brief biography, noting only that the colony soon fell into the hands of less able men – men whose judgment had so hardened and whose views had become so provincial and skewed that they saw fit to execute more than twenty-five persons over what Cotton Mather would later call “wonders of the invisible world.”

One final observation. The Puritan Dilemma is a book worth a look for this reason: many of the attitudes – towards women, towards authoritarian government styles, toward disenfranchising people for being likely to disagree – will ring in one’s consciousness as hauntingly familiar. Reading this book will give any thoughtful person a better perspective on some of the attitudes and actions in our current political climate.