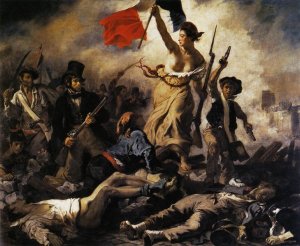 “Their prophet is Satan. There is no connection between the Islamic faith and this minority.” -Hassan Chalghoumi, an imam of the Paris suburb of Drancy

“Zeal, in religion, is a pure and enlightened attachment to worship of the Divinity and its maintenance and progress; but when it grows blind and false and takes to persecution, it becomes the greatest scourge of humanity.” – Voltaire, Questions on the Encyclopedia

I am crying as I type this, listening to La Marseillaise over and over in the headphones. The beauty of the Republic of France, which even we Americans envy, is your resolve. While American revolutionaries stopped with a new system of government, the people of France devoted decades to reforming the very fabric of society. We shook hands as fellow citizens. You embraced as brothers. We shook off the physical shackles of tyranny. You rooted it out in your hearts and minds, looking where we dared not, holding a mirror before the entire human condition, willing the change that only comes from within.

These cowards are so confused they do not even know they are in France. If they knew, they would tremble. They would give themselves up. If they could consider rightly the question, “how can one use religion to divide a people who are resolved not to be divided by religion?” they would see the enormity of their error, the futility of their savage tantrum. They would weep for the beauty they have destroyed, as I am, and they would beg forgiveness.

If they could recognize the Fraternité that allows Deists like Voltaire, atheists like Marie Curie, and Christians like Victor Hugo to be buried side by side in the Pantheon, a sometimes church and always temple to reason (that which raises us above our animal nature), they would recognize that there is room for great rational Muslim minds in France, too.

They are blind to the reality, all around them, that France is free and nothing can change that. Agents of evil were forced to confront this reality in the form of La Résistance during the occupation. No amount of persecution and death could deprive your people of their liberty, because it came from within. So it does now.

Know that we are with you in the time of sorrow, as ever. Our hearts beat as one with yours. We applaud the courage of your artists, your thinkers, those we lost today in the service of humanity. Know that evil cannot and will not prevail. Know that this was an act of desperation, of madness, the death throes of a foe who was dealt a mortal blow centuries ago. Know that you have been right all along. The true battlefield is the hearts and minds of the people. Vive la révolution. Vive la France.