NYPD: Heroism is a choice 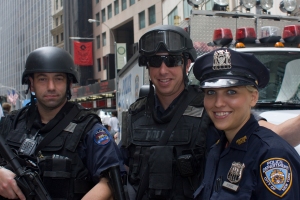 Detectives Rafael Ramos and Wenjian Liu were victims of a terror attack. I remember the World Trade Center attack like my grandfather remembers the buzzbomb that knocked him off his bicycle. I have the piece of shrapnel that he saved, right next to my Chinatown painting of two airships closing in on the towers. I remember the smell of burning asbestos, human bodies, and desktop knick knacks, that drifted uptown for days.

The motivation is irrelevant. Terrorists are insane. They have weighed the value of human life against the value of their personal will and chosen the self. They have chosen death. This is why a suicide attack is an acceptable tactic. Killing and even dying are preferable to not getting their own way. The only effective weapon against this mentality is to resist the terrorist’s goals, the personal will that the terrorist is trying to impose. That is the only thing that matters to the terrorist.

The police have a serious problem with transparency. Just ask Serpico. He has raised the profile of police corruption for decades, without much success in changing the systems that allow such corruption to go undetected and unpunished. Excessive use of force is another systemic problem, one which has been elevated into the public consciousness in a way that corruption was in the seventies.

We have an opportunity to address this problem, to increase transparency in our police forces, to better provide for the common defense, to work together. The terrorist is trying to destroy this opportunity by dividing us along the thin blue line. Is he aware that his goal is division, separation, the subjection of the whole to the will of the self? It doesn’t matter. That is what he has done. Now the police have turned their backs on Mayor Bill de Blasio, who stood up for freedom of assembly, and whose faith was justified by the peaceful protesters.

The police do not want to turn their backs on freedom of assembly, but right now they understand the question as a binary choice between freedom and security, because that is the choice the terrorist has presented them. This is a natural reaction to a terror attack. This is why Congress wrote an open-ended declaration of war on anyone and everyone except ourselves in the days following the World Trade Center attack. It is crucial that our police do not make the same mistake as our Congress.

To close oneself off in the time of crisis is tantamount to surrender. It is the wounded animal fighting off the veterinarian. Right now, the police and the community are united in their desire for justice, but the system is resistant to change. If the terrorist can divide us, if we do not work together, that system will not change. Justice will not be served.

The personal will of the terrorist was vengeance. If we grant that vengeance, the terrorist wins. The answer to vengeance is mercy. We must forgive one person for killing three, including himself. We must not surrender our goals and accept his goals instead. Police departments across the country have been examining their own practices, increasing transparency, improving training, and increasing community involvement. This change is happening. The email response of Chief Steve Anderson of the Metropolitan Nashville Police Department to a citizen who fears change rings especially true in light of this attack.

As imperfect humans, we have a tendency to limit our association with other persons to those persons who are most like us. Unfortunately, there is even more of a human tendency to stay within our comfort zone by further narrowing those associations to those persons who share our thoughts and opinions. By doing this we can avoid giving consideration to thoughts and ideas different than our own. This would make us uncomfortable. By considering only the thoughts and ideas we are in agreement with, we stay in our comfort zone. Our own biases get reinforced and reflected back at us leaving no room for any opinion but our own. By doing this, we often convince ourselves that the majority of the world shares one opinion and that anyone with another opinion is, obviously, wrong.

It is only when we go outside that comfort zone, and subject ourselves to the discomfort of considering thoughts we don’t agree with, that we can make an informed judgment on any matter. We can still disagree and maintain our opinions, but we can now do so knowing that the issue has been given consideration from all sides. Or, if we truly give fair consideration to all points of view, we may need to swallow our pride and amend our original thoughts.

I beg the police who are suffering because of a terrorist attack on their community, do not withdraw. Do not be afraid. Where there is evil, where there is harm done, yet, the darkness does not overcome the light. Together we can provide for the common defense. It’s what your brothers and sisters did during the World Trade Center attack. Justify their faith, as the peaceful protesters justified Mayor Bill de Blasio’s faith. This is New York. This is America. We do not surrender.