The Christmas Blues – courtesy of Dickens and the Foxfire Project…

The holiday season is most often described as “joyful,” “merry,” “bright” – candles instead of cursing the the darkness – but both the Appalachian storytellers of “A Firefox Christmas” and Charles Dickens in “The Chimes” remind us that the holidays can be a time of loneliness and disillusionment…

I complete the 2014 reading list as I did the 2013 reading list – with some holiday appropriate stories. For this year’s list I returned to the acknowledged godfather of Christmas tales, a Mr. C. Dickens, for his haunting look at what we really should mean by “starting the New Year right,” The Chimes.  I followed that with the Christmas entry in the Foxfire series of folk lore compendiums, A Foxfire Christmas.

What is striking about both these works is the powerful current of pathos that runs through them. One expects this of Dickens, of course. No one does pathos like the creator of Little Nell, Oliver Twist, and Jo the crossing sweeper. The Firefox books, on the other hand, are compilations of stories and folk wisdom from long time residents of Appalachia. Their experiences, related as nearly as possible in their own words, range widely and move from the humorous to the heartbreaking – sometimes abruptly. The overall aim isn’t (as it often is with Dickens, that master manipulator of our emotions) to foster sympathy and motivate social action; Foxfire books primarily seek to preserve cultural history – the pathos one sometimes encounters there is firmly embedded in the history being shared. 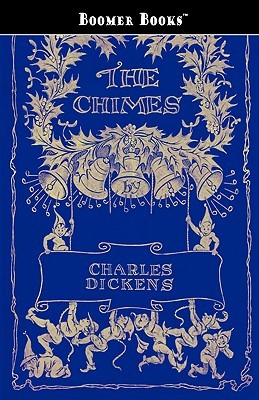 The Chimes tells the story of a ticket porter (messenger) named Trotty Veck, a poor (and old) Londoner who plies his trade from the steps of a church where the chimes of the title are located (Trotty believes they speak to him) and wastes too much of his time worrying (based on his reading of newspaper reports that are uniformly negative about the working class, of which he and everyone he knows are members) that his class is simply degenerate beyond redemption. He has a lovely and devoted young daughter, Meg, who is betrothed to a stalwart young blacksmith named Richard. On the last day of the year they arrive at the church to tell Trotty that they plan to marry on New Year’s Day. The joy of all three is unalloyed – until a pretentious alderman (named, in typical Dickensian style, Cute), aided and abetted by a relentlessly utilitarian social economist named Filer, straight out of Hard Times, ruins their joy by arguing against the marriage so vigorously that he causes a rift between Meg and Richard and leads Trotty to doubt the right to happiness for any member of the working class. This is exacerbated when Trotty is further berated by Sir Joseph Bowley, MP, to whom he has delivered a message for a pittance in payment. Another utilitarian, Sir Joseph castigates him for ending the year a few shillings in debt to Mrs. Chickenstalk, a local shopkeeper – the direct result of being shortchanged by men like Sir Joseph.

On his way home from Bowley’s, Trotty meets Will Fern and his little niece Lilian. Fern is seeking work – and trying to find relations who live in the area. Trotty has heard Alderman Cute and Sir Joseph plotting to “put him down,” i.e., send Fern to prison for a minor offense because he has had the unmitigated gall to criticize their brutal policies as alderman and member of parliament respectively. In a typically kind-hearted gesture, Trotty offers them lodging for the night. He uses his meager wages to provide them with a little nourishment, and little Lilian instantly forms a bond with Meg. Trotty sees that Will is a good man – which does not jibe with the description of Will given him by his “betters” Cute and Sir Joseph. Trying to reconcile this incompatibility as he falls asleep, he dreams a strange dream that he is dead, having fallen from the bell tower in his quest to see the chimes.

See them he does – or rather the spirits of the chimes (Dickens insists on describing them as “goblins” which seems – now – slightly archaic) of the chimes. They take him on a journey through the lives of those he loves and he is shown how the policies of the Cutes, and Sir Josephs of the world, designed to “improve” the working classes by denying them support and opportunity and by punishing them cruelly and arbitrarily, have destroyed the lives of those left behind. Richard and Meg, thwarted in their marriage plans by Cute’s discouragement, have ended up as miserable, lonely people. Richard, broken-hearted, has become an alcoholic and Meg has sunk ever deeper into poverty thanks to the harsh economic policies that devalue her work as a seamstress at every turn. They finally do marry, a last ditch effort on both their parts to recover some happiness in life – and, on Richard’s part, to stop his self-destruction. The attempt works briefly, but eventually Richard falls into alcohol abuse again, his health fails, and he dies – leaving Meg with a child to support. Lilian, left to Meg’s care because of Will Fern’s unjust imprisonment, works hard to learn the seamstress trade – but the poverty drives her to turn to prostitution to take care of herself and Meg. That life leads Lilian to an early death. Will, imprisoned for the pettiest of offenses again and again to “teach” him to respect the cruel treatment he receives by the system, eventually becomes a terrorist and sets fire to government houses and businesses until caught and executed. Meg, with all those she loves dead and unable to make enough to support herself and her child, is about to throw herself into the Thames when Trotty, a spirit led by spirits through this saga of misery, becomes human again and grabs for Meg to save her from drowning herself. He wakes to find himself reaching out – and grasps the lesson. Life is about more than economic efficiency.

His friends and neighbors throw a New Year’s party – during which, in Dickensian fashion, Will Fern and Lilian meet Mrs. Chickenstalk and discover that she is their long sought relation. Meg and Richard reconcile and their marriage is celebrated with great joy. And Trotty realizes that Sir Joseph and Alderman Cute are guilty of great evil:

Who turns his back upon the fallen and disfigured of his kind; abandons them as vile; and does not trace and track with pitying eyes the unfenced precipice by which they fell from good—grasping in their fall some tufts and shreds of that lost soil, and clinging to them still when bruised and dying in the gulf below; does wrong to Heaven and man, to time and to eternity.

A Foxfire Christmas is, in some ways, a mirror piece to The Chimes. While Dickens seeks to offer a commentary on the plight of the working classes with what is essentially a variant of the Christmas ghost story, the students who compile the anecdotes, recipes, descriptions of traditions, and brief memoirs offer a look into what Christmas is like for the poor. It is a book with deep pathos, but that pathos is leavened both by the humor that pervades some of the stories and by the lack of self-consciousness of their tellers. The book is divided into sections such as “Preparations and Decorations, “Gifts and Santa,” and “Food and Menus.” The two most affecting sections of the work are called “Serenading” and “Stories.”

“Serenading” was an old custom practiced by Appalachian young people that is a cross between trick or treating and a shivaree. The antics described included dismantling farm wagons and reassembling them on tops of barns, firing off shotguns, setting off firecrackers, and generally making lots of noise. Wise recipients of visits from serenaders invited them in and gave them refreshments. The custom finally faded away in part because the revelry grew too rowdy and drew the wrath of parents, community, and churches.

The section called “Stories” contains a pair of reminiscences that are striking in their evocations of the difficult lives of Appalachian residents. The story of Carolyn Jones is particularly affecting. Abandoned by her father after her mother’s death,  she tells of Christmas when she was eleven. Her older brother, who worked some ways away at a saw mill, was unable to come home for the holiday and Carolyn was left alone. Hungry and sad, she decided to visit a school friend, the daughter of a preacher. When it was time for Christmas dinner, the preacher turned her out of the house, telling her that she was disturbing their “family time.”

Yes, you read that right. A preacher turned a hungry, abandoned 11 year old out into the snow on Christmas Day. Jones is adamant about how such treatment by a representative of the person for whom the day is celebrated has affected her:

…even now, I resent anyone that even looks like him. I haven’t been strong enough to find forgiveness or forgetting inside me for what he did…they [she mentions drunks who tried to assault her] never professed to be loving and gentle and kind and then turn around and turn someone away who just wanted something to eat….

Clyde Hodge shares an equally heartbreaking story. Living in a large, deeply impoverished family, he had never had any gift at Christmas. He learned of Santa from classmates at school and, believing in the magical powers of Claus, erected a small Christmas tree (something his family had never done) in hopes that Santa would visit. He received, of course, nothing – though when he visited neighbor children, they had received gifts. The same happened the next year. Finally, in the 3rd year of his attempt to meet the mysterious criteria for selection by Santa, he reached a breaking point. Again receiving nothing, he visited a neighbor child who had received a lovely doll “from Santa.” Clyde tricked the girl and took her gift – but not to steal it. He hid the doll in a crevice in a group of rocks. After the girl raised an outcry, Clyde finally got a present for Christmas – a whipping from his father after he was forced to confess his deed and return the doll to its owner. His reflection on the event is the epitome of poignancy:

I laid in my bed that night thinking what Christmas is all about. How exciting it is to get the whipping of your life. It’s not worth it, but I was optimistic.

It takes a few more years, but Clyde finally does get a Christmas present. And as an adult he has had a happy life and many happy Christmases – and has been able to give his children what he so longed for – the joy of a visit from St. Nicholas.

We argue much about our holidays these days. Like every other part of our lives, commercialization, politicization, and media saturation have made it hard to feel the Christmas spirit. Maybe we need goblins – or cruelty from those purported to be kind – or whippings to help us reach some understanding of what the season can or should or might be. Maybe our Christmas blues are only temporary.