Tattoos not only wear out their welcome, but brand their wearers as philistines. 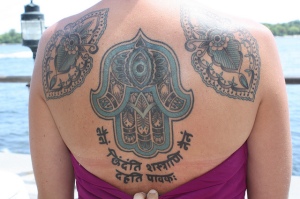 I appreciate tattoos as much as the next person. I’ve even considered getting one — a target painted on my head to guide incoming interballistic missiles in the event of a nuclear war that I have no interest in surviving. But I have some serious reservations, aside from face or neck tattoos, which, unless you’re a genius, pretty much kill your job prospects. Or the sag factor as you age. Or paranoia that the ink will somehow become absorbed into your bloodstream and organs and slowly poison you (okay, that’s just me).

I’ve pared my objections to tattoos down to three:

1. Unlike a picture hanging on your wall, when you tire of it, you can’t rotate it out and replace it with a new one (without going to extreme measures, that is).

2. The fatigue factor also extends to a tattoo that, however much it initially amazes, reeks of cleverness, a quality hobbled by its built-in obsolescence.

3. Of paramount importance to most who are tattooed is what the tattoo says about her or him. But, from the vantage point of this observer, tattoos that are more than just insignias or religious iconography tend to mark the tattooed individual as one whose interest in art begins and ends with the illustrative. It suggests that he or she lacks the imagination and/or education to appreciate modern art, from impressionistic to abstract and beyond. (Google modern art tattoos to see how rare they are.) Also, returning to the fatigue factor, though many would vehemently disagree, I submit that realistic art has a shorter shelf life than modern art.

I wonder about the day when there will be technology that can tattoo photorealistic art on the skin. I sort of assume that it’s only a matter of time, although I can’t say I have heard of anything like this. I do know that there is increasing interest in tattoos that are a LOT more realistic — as in, portraits that are damned near as good as a photo. This is still illustration, but it is illustration of a very different character.