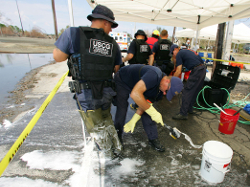 That’s the first search result, accompanied by the following text:

3 hours ago – … pilloried at home for voting with the president, and has watched helplessly while her Democratic base has eroded like a cheap levee.

If you haven’t already clicked the above link, don’t bother. It was a “page not found” page from The New York Times that renders when clicking through that mobile.nytimes.com link.

The next result was from a website called Grand Rapids City.com, that links to the “page not found” page at The New York Times. At, not from. Grand Rapids City.com phrases the headline a bit differently, as well, “PAGE ONE FRIDAY: LANDRIEU SUPPORT ERODING ‘LIKE A CHEAP LEVEE’…” The “read more” link goes to the same page as the headline link. Initially I was going to just link that headline, but when I was pasting the URL in the field where it goes, I noticed that it was somewhat slightly different from what I expected.

Okay. The next article linked to by the website was at World Net Daily. I think we can assess our source’s market segment fairly well from those details.

The next Google result was from idrudgereport.com. That Drudge page links via headline to The New York Times version of “page not found,” not mobile.nytimes.com.

That lines up with the second source well enough. So far, Google, GRC, and Drudge have linked to it, Google at mobile.nytimes.com and GRC and Drudge at nytimes.com.

Next we have a completely unrelated website followed by three links from a news aggregator I’d not heard of, sNEWSi.com. None of the three sNEWSI links led to anything related. And that was all seven results.

In the interest of disclosure, I should add that I first learned of the Mystery of the Disappearing Foot in Mouth from Drudge, via newsreader.

It looks to me as though someone at the NYT thought that would be a fine comment, shot it out, and then it went to nytimes.com and mobile.nytimes.com, in whatever sequence, and it was up only just long enough for Drudge to pick up one and Google’s magic Googliness to pick up the other. I’m guessing someone at NYT with the power of Delete and somewhat better taste saw that flicker across the screen and had a bad moment. Whatever was discussed before and after, and between whom might be the stuff of scandal, or maybe it was just a casual, “hey, don’t do that,” and no biggie.

I’m also wondering if this is just the first drop in a new tempest in a teapot downpour from the usual stormclouds on the Internet.

Or maybe it was just one of those odd moments where the Internet hiccups and it really was no biggie?

Or is there some journalistic obligation on the part of the The New York Times to address the matter in an editorial, even something as short and predictable as “mistakes were made, won’t happen again?”

Or is this just 21st C. journalism, the state of the art thanks to the media’s gutting of its newsrooms, where overtaxed writers are cranking ’em out as fast as they can, and a clever turn of phrase doesn’t get the extra moment of consideration that might lead to second thoughts? No time for that! Make with the news, already! Zinger, good! Movin’ right along! I doubt the writer even meant any offense by that. He or she likely bears no ill-will for New Orleanians at all.

If this becomes a thing, will some New Orleanians be right to take offense, the same way one might expect a New Yorker to take offense were there an article about a New York pol’s support crumbling like two towers [h/t]? Justified or otherwise, would that umbrage just succeed in irritating the anti-PC crowd, because NOLA had it coming, they live in a bowl, you know the ones?

Bob McMillan – This image is from the FEMA Photo Library, courtesy Wikimedia Commons.

Tagged as: "like a cheap levee", Landrieu, New York Times