Being There…or we knew the bride when she used to marry rockers….

Pattie Boyd’s autobiography is a fascinating and messy piece of memoir that offers sometimes illuminating, sometimes banal insights into the private lives of two of the rock era’s iconic figures – George Harrison and Eric Clapton...and raises a slew of bigger questions… 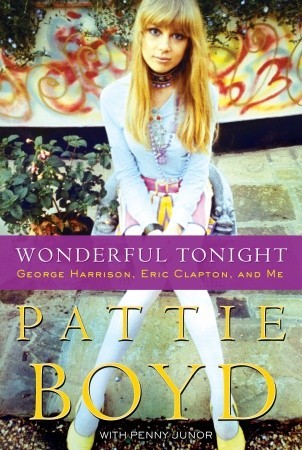 When Tom Snyder asked John Lennon in the famous Tomorrow Show interview why he became a musician and formed a band, Lennon replied slyly, “For the birds, Tom. That’s why every guy does it. To get girls….”

Pattie Boyd was one of the most famous of “the birds….”

A few years ago Boyd published her autobiography which I just re-read as part of my 2014 reading list. It should be a riveting read for anyone interested in rock music, rock history, or rock stars in our popular culture.

Before we go into why, exactly, Boyd’s autobiography causes arguments, it might be useful to talk a little bit about reasons why people are famous.

As Clive James notes in Fame in the Twentieth Century, the ubiquitousness of media over the last 100 plus years (particularly of electronic media – dominated for 6 decades by television) has made it possible for people to be famous simply for – well, for being famous. Prior to the onslaught of media saturation, one became famous by actually doing something for which one became famous. In a “media culture,” especially one that privileges image above all else, having a “look” that catches the public’s attention, if only for a season, can (and more and more it seems, does) trump actual accomplishment: one has only to consider the difference in the careers of Joni Mitchell – who became famous because of her talent as a singer and songwriter – and Madonna – who became famous not for writing and singing songs, although she ostensibly did the latter, but rather for creating an image of herself – and successfully modifying and re-inventing that image over a decade or more. Thus we find ourselves moved from a culture of accomplishment that brings fame to one dominated by image – a culture that assigns more importance to chronicling fashion models, movie stars, and television “personalities” than artists, scientists and statesmen and women….

There was, I would argue, a moment of what we might think of as the “transitional apotheosis” between the culture of accomplishment and the culture of image. While the rise of rock and roll, and particularly the explosion of Elvis Presley and other early stars brought an outlandish new fashion sense to music, a specific event swept across the consciousness of the vast sea of Baby Boomers and planted deeply in their minds the importance of image:

The Beatles were equal parts accomplishment – their brilliant songwriting and performing admired by and inspiring to a generation of would-be musicians – and image – their haircuts and dress made flamboyant male dress fashionable and long hair de rigeur for decades, even across class and race lines.

And The Fabs themselves were as much consumers/admirers of as creators of the cultural change they ignited, as John Lennon notes:

We were all just at the prime, and we all used to just go around London in our cars and meet each other and talk about music with the Animals and Eric [Burdon] and all that. It was a really good time. That was the best period, famewise; we didn’t get mobbed so much. I don’t know; it was like a men’s smoking club, just a very good scene. We created something, Mick and us, we didn’t know what we were doing, but we were all talking, blabbing over coffee, like they must have done in Paris, talking about paintings . . . me, Burdon and Brian Jones would be up night and day talking about music, playing records and blabbing and arguing and getting drunk. It’s beautiful history, and it happened in all these different places…

Yes, it’s beautiful history. But, as Heisenberg warns us, there can be unintended consequences…. Succeeding iterations of bands gradually became more about image than accomplishment (think about two later – and, to be fair, talented – bands that were unfortunately too image driven, The Raspberries and Duran Duran) until we seem to have reached a point where merely an image (even a recycled one) is enough to drive a band’s success (Strokes, anyone?).

Patti Boyd is a textbook example of the cultural transition. She began as that most emblematic of icons of the culture of image – a fashion model. She met George Harrison, considered the most “model” handsome of The Beatles, on the set of A Hard Day’s Night. They became the template of the perfect celebrity couple – a glamorous image with (at least according to Boyd) lots of breadth (the 80’s saw a mania for rock stars marrying fashion models, for instance) but little depth.

Wonderful Tonight offers ample proof of that lack of depth.

Boyd saw much of The Beatles (and sixties) turmoil and creativity from the inside. But what she shares with readers is the stuff of soap opera: George didn’t let her model after they married; she played the dutiful wife and learned to cook for him; he spent half his time meditating and communing with Krishna, the other half artificially stimulated and cheating on her (including having an affair with Ringo’s first wife, Maureen Starkey). Boyd says that George wrote ‘Something’ about her; George said after the marriage had ended that he didn’t. (Although in fairness we should remember the revisionist history that goes into putting failed relationships at arm’s length, so whether George did or didn’t pen the classic for his first wife is certainly arguable.) Boyd does exhibit an admiration for Yoko Ono and Linda McCartney that seems based on a sensible principle:

The English public as a whole didn’t like Yoko or Linda because they didn’t get them . . . they were looking at them physically and thinking, I’m sure I look better than those two.’ But they stood up to their men, which is what was needed because they’d been feted and courted from a very, very young age…. Whereas I would be: ‘If the man says that he wants this, that or the other then that’s what we’re going with’ because that’s what I learnt from my mother, you see – whatever the man says is right.

Still, we learn little about The Beatles except their romantic peccadilloes. Some of these may be things we don’t know about them, but the choice to focus on this material plays to a culture that celebrates the banality of celebrity folly like yet another reality show on VH1….

And then there’s her relationship with Eric Clapton. A close friend of George Harrison throughout Harrison’s life (and desperate to be as iconic as The Quiet Beatle, an impossible quest for purely socio-historical reasons), Clapton courted Boyd by writing for her two of rock’s most famous love songs, the transcendent “Layla” and the (to me, irritatingly cloying) “Wonderful Tonight.” His desperate love for Boyd – she says – drove him into first heroin addiction and then alcoholism.

What ultimately drove Boyd into Clapton’s arms was not his suffering for her, though – it was George’s philandering, specifically the previously mentioned affair with Maureen Starkey. And what makes the entire business curious – that Clapton and Harrison continued as fast friends after one took away the other’s wife – seems too unimportant for her to offer other than a superficial explanation that after all, they were mates….

Life with Clapton was perhaps even more miserable than life with Harrison. Because of her own inability to have a child, Clapton fathered two children with mistresses during their marriage. And his alcoholism raged throughout their relationship. Yet Boyd chose to continue in the pattern she’d followed with her first husband:

I used to excuse him in the same way that I would excuse George. Both men were so creative that there were times when they had to retreat and listen to what was going on in their heads. Eric was like a child: his wants and needs were immediate and paramount and he had no understanding that other people’s had to be considered.

Boyd’s best insights come in her assessment of herself as muse to two of rock’s legends:

To have inspired Eric, and George before him, to write such music was flattering. Yet I came to believe that, although something about me may have made them put pen to paper, it was really all about them.

And maybe that’s the tragedy of Pattie Boyd’s life – she was a trophy – a beautiful woman suitable to be seen with a rock star. She was part of the image an alpha male male rock star would want to convey (an image that, to give credit where it’s due, Madonna did mock). And she was incapable, perhaps, of being more than that.

The title of this piece references two significant works – Jerzy Kosinsky’s Being There and Nick Lowe’s “I Knew The Bride When She Used to Rock and Roll.” The heroine of Lowe’s song is a party girl who seems to be settling down (although we note that she sees the narrator and gives him “a secret smile”). The main character in Being There is Chance, a gardener who is merely a cypher – someone who reflects the light projected by those around him.

It seems fitting that Pattie Boyd, so long an image herself, has become a photographer of some note. While she still seems a servant of the culture of the image, at least she gains some satisfaction from controlling the image, perhaps. Still, one wishes she could have offered us deeper insight into her life and times given the fascinating world she inhabited as the wife of two rock legends. What we’re left with seems like one of her photo exhibits – a series of images from which we have to derive our own understandings….