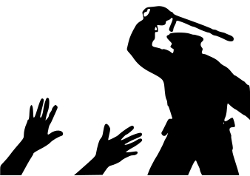 One of these things is not like the other

In a Sunday interview, President Obama defended his recent controversial executive order that shields some, but not all, illegal immigrants from deportation. The president also fielded questions about other issues during the interview. Regarding the tensions in Ferguson in anticipation of the grand jury’s indictment decision, he had this to say:

Mr. Obama urged those in Ferguson to “keep protests peaceful,” but he also envisioned that things might go badly. “You know, we saw during the summer the possibility of even overwhelmingly peaceful crowds being overrun by a few thugs who might be looking for an excuse to loot or to commit vandalism,” he said.

The president said he had spoken to Gov. Jay Nixon of Missouri to ensure that he had a plan to respond to any violence and “to be able to sort out the vast majority of peaceful protesters form [sic] the handful who are not.” More broadly, he said, law enforcement and minority communities across the country needed to find ways to deepen their levels of trust.

Very interesting. On the matter of police brutality against protesters, the president had remained comparatively silent in the past. So silent that he was even interrupted with an Occupy mic-check:

“Over 4,000 peaceful protesters have been arrested while bankers continue to destroy the American economy. You must stop the assault on our 1st Amendment rights. Your silence sends a message that police brutality is acceptable. Banks got bailed out. We got sold out.”

Maybe silent is a bit generous as a characterization. After all, he did sign the anti-protest bill, the Federal Restricted Buildings and Grounds Improvement Act on March 8, 2012. Did I say silent was generous? Hell, we now know that President Obama was complicit in that violence against Occupy.

What accounts for the difference? Do the math.