Rod Stewart: Just a Singer in a Rock and Roll Band… 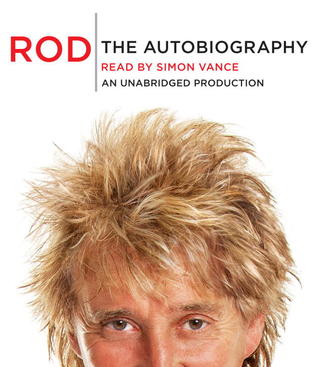 There have been a spate of rock star autobiographies over the last decade or so from classic rock’s legends. One assumes that after having so much written about them that was true/untrue/somewhere in between they wanted to have their say.

Pete Townshend, Bob Dylan, Keith Richards, Eric Clapton – all have written interesting, if at times slightly self-indulgent, biographies of themselves (how self-written these “autobiographies” are is probably arguable from a strictly literary standpoint). From these we learn that Eric Clapton and Pete Townshend had troubled childhoods and that each has been long engaged in the “search for self” because of childhood trauma. We also learn that Bob Dylan and Keith Richards are never, ever, ever, ever going to give anything away that might break the front or dispel any of the mystique they have long worked at building around themselves. If they can do so, they will die in a way so that we will exclaim “That is so cool!”

And then there’s Rod.

Rod: The Autobiography is 380 pages long including the discography. For the most critical readers – those rock music connoisseurs who condemn Rod for his twin sins of “breaking up The Faces”(which isn’t true, Keith Richards broke up The Faces so that he could get Ron Wood into The Rolling Stones) and of leaving both England and his greatest artistic period, the early solo albums, behind and becoming rock’s greatest lounge singer – the last 200+ pages will be a trying experience of trying to keep the various beautiful blondes sorted out all while lamenting how Rod Stewart prostituted his great talent to Mammon and mammaries.

That’s not the experience one should have. I have been as critical as any serious student of rock (and I have been on both sides of the fence as both musician and as commentator) of Rod’s seeming squandering of his talent as a singer for the sake of popularity. But after reading Rod’s explanations (and, to be sure, excuses), I am inclined to forgive him. Before those of you who find him permanently unforgivable go apoplectic, allow me to explain.

One characteristic that makes Rod: The Autobiography an enjoyable read is Rod’s wonderfully self-deprecating self-assessments. He freely admits, for example, that he never got further than a try out with a low level English soccer team (one of the myths that has long surrounded Stewart is that he could have been a top footballer had he not become a major rock star). His love for the game (and the strong bond that love forged between him and his father and brothers and that he now shares with his sons) is clearly genuine and endearing. In fact, one of the strongest messages in Rod is that of the importance of family to the man – and for a guy with as many wives, ex-wives and children – both in and out of wedlock – as Rod Stewart has, he shows remarkable love and affection for them all. One can’t help but think of Rod The Mod as a better exponent of “family values” than many who proclaim their support of that ever more amorphous commodity. He’s equally self-ridiculing of his love of silly clothes, his fastidiousness about his hair, and his fascination with all creatures long-legged and blonde. If ever tone helped a writer, it helps Rod Stewart. The most bittersweet, touching chapter in the entire book is about his time with The Faces – the excess, the egos, the joys, the disappointments, the collapse of the group and its ultimate validation: induction into the Rock and Roll Hall of Fame. In as good an example of what we might call “the Stewart style” of storytelling, he ends the chapter with this anecdote about his mother to sum up his involvement in one of rock’s most influential bands:

Still, I’m mindful of the last days before my dear old mum died in 1991, aged eighty-five, when i would go to see her and sometimes find her sleeping. The confusion was most certainly upon her in those last few years, and very often she would wake up and say, ‘Oh. hello, Roddy. How are the Faces doing?’

The other, perhaps less flattering to Rod Stewart, characteristic of Rod: The Autobiography that makes it a worthwhile read for both casual and serious music fans alike is how revelatory it is of a rich rock star’s alternating acute self-awareness and acute lack of self-awareness. When Rod talks about his work – and his lack of self-confidence concerning his early solo work, the work that made his artistic reputation – he is keenly self-aware that he is not and never has been a good judge of his own achievement, especially so when he has just completed an album. In his personal life he is keenly aware that he was a prodigious – and often self-destructive – philanderer and that he has cost himself some relationships that might have been extraordinary with his caddish behavior. But within a few sentences Rod may digress (and a charming feature of this book is that Rod offers numerous chapters called “Digressions” wherein he addresses such weighty matters as his deep love for soccer, his trademark spiky hairstyle, and his affection for flashy sports cars, particularly Lamborghinis) and talk about how madly in love he was with this or that 20 year old tall, blonde underwear model who’d caught his eye or about how he spends too much money chartering private jets to fly him to soccer games.

I’d like to say that this alternating insight/lack thereof makes Rod a complicated guy. That would explain, at least, some of the self-revelatory self-indulgence of this book.

Rod Stewart may be a lot of things, but a complicated guy he isn’t. He’s relatively binary – he loves his family, fast cars, beautiful blondes, and being a rich rock star. He dislikes England’s national team (soccer, of course), a couple of former staffers who betrayed his trust, the paparazzi, and the idea of being poor. Certainly he has ambivalence – he worries that he wasn’t a good enough father to his older children (with reason). But he is about equally ambivalent about what “Do Ya Think I’m Sexy” did to his legacy as a rock singer. He knows he can’t write great material with any frequency any more. But he’s inordinately proud about how well his Great American Songbook series of albums sold (over 20 million units). And he waffles between thoughts of retirement and plans for going on until he simply can’t anymore.

What Rod: The Autobiography reveals is that, to paraphrase a line from contemporaries of his, he’s just a singer in a rock and roll band.