Colorado’s latest zygote personhood amendment is a cynical ploy to use a tragic accident and a now closed legal loophole to ban all abortions in the state. 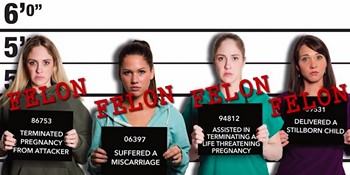 Via Jen Caltrider at HuffPo

They’re at it again. Amendment 67 in Colorado seeks to redefine both “person” and “child” in a way that include zygotes and fetuses, or what the text of the personhood folk would prefer we called “unborn human beings.” You’d think that Colorado’s zygote personhood crowd would have got the message in 2010 when Amendment 62 was voted down 71% to 29%, or back in 2008 when Amendment 48 was voted down 73% to 27%. But apparently not.

This time the zygote personhood supporters are being a little bit sneakier. First, the text of the Amendment (see the bottom of this post) has a lot of extra wording included that is not strictly necessary, but makes it harder to read and understand. There’s no reason why judicial opinion, even opinions by the Colorado State Court of Appeals, needs to be included in an Amendment. The real meat of the Amendment is actually 2. Definitions:

In the interest of the protection of pregnant mothers and their unborn children from criminal offenses and neglect and wrongful acts, the words “person” and “child” in the Colorado Criminal Code and the Colorado Wrongful Death Act must include unborn human beings.

According to Title 19 of the Colorado Revised Statute, these are some of the crimes that a woman might be charged with if she’s pregnant.

A woman or her doctor might be charged with child abuse if the fetus suffered from skin bruising, bleeding, malnutrition, failure to thrive, fracture of any bone, soft tissue swelling, or death, along with a few other options that are less likely. According to these, it’s reasonable to guess that a homeless woman unable to feed herself regularly could be charged with child abuse if she gave birth pre-term, had a stillbirth, or had a miscarriage. If a woman tried to go through natural childbirth but the baby was delivered with an injury could result in the woman’s gynecologist being charged with child abuse. After all, a C-section might have delivered the baby without injury. And what happens if the mother is on drugs that have known side effects for fetal development, like some forms of antidepressants and antipsychotics? Does she go off the drugs and possibly become a danger to herself or others to protect the fetus or does she risk child abuse due to “failure to thrive?”

Does drinking alcohol become child abuse? How about smoking? Or eating lots of peanut butter (which might prime the fetus for a peanut allergy later in life)?

Where do the rights of the woman end the rights of the fetus begin? I can’t help but wonder how long it will be before pregnant woman are forced to ride in the center of the back seat while wearing special womb protective gear. Before you dismiss this as completely absurd, take a look at a car seat or stroller – every warning label represents at least one major lawsuit. Too many people lose all capacity for rational thought when it comes to children’s safety, and as soon as a zygote or fetus is redefined to be a child, that irrationality will come to bear on women.

Like most reproductive issues, Amendment 67 is also cruelty pretending to be compassionate. For example, Amendment 67 would unfairly affect poor women more than wealthy women. Say a woman wants an abortion – if the woman is wealthy, she’ll be able to flee Colorado for her abortion, while a poor woman would be stuck in the state and forced to deliver a baby she doesn’t want. What about a fetus with anencephaly (“congenital absence of all or a major part of the brain”) that cannot survive outside the uterus? Amendment 67 would heartlessly force a woman to carry such a fetus to term instead of permitting her to end her pregnancy and start healing potentially months earlier. And it would ban all abortions, even in the case of rape and incest. Where’s the justice in that?

Finally, by tying the amendment to a tragic accident where the mother survived but her 8-month fetus did not, supporters are trying to manipulate voters into voting for a terrible Amendment. It’s horrible how Heather Surovik’s pregnancy was ended by a drunk driver and how the driver wasn’t charged for ending her pregnancy is horrible story, and at the time there was a legal loophole in Colorado law (the driver later committed suicide). But this loophole has been closed for a year now, something that both Surovik and Personhood USA (the organization behind Amendment 67) fail to mention in their political advertising.

In 2013 the Colorado Legislature crafted a law, HB 13-1154, that specifically closed this loophole without creating problems like I’ve described above. But both Surovik and Personhood USA opposed HB 13-1154 because it was carefully worded so as not to ban abortion or criminalize medical professionals. In essence, Surovik and Personhood USA are using the death of Surovik’s fetus as part of a cynical ploy to manipulate Colorado voters into banning abortion.

And that really tells you all you really need to know about Amendment 67. It’s not about justice for Surovik’s fetus. It’s not defining who is and is not a child. It’s about a cynical ploy by Personhood USA and Heather Surovik to manipulate Colorado voters into banning abortion. And that’s why Colorado voters should vote against Amendment 67 on November 4.

(a) “There is no definition of ‘person’ or ‘child’ of general applicability in the Criminal Code” (majority opinion by Judge Roy); and

(b) “This is an area that cries out for new legislation. Our General Assembly, unlike congress and most state legislatures, has precluded homicide prosecutions for killing the unborn” (Judge Connelly concurring in part and dissenting in part).

2. Definitions. In the interest of the protection of pregnant mothers and their unborn children from criminal offenses and neglect and wrongful acts, the words “person” and “child” in the Colorado Criminal Code and the Colorado Wrongful Death Act must include unborn human beings.

3. Self executing, and severability provision. All provisions of this section are self-executing and are severable.

4. Effective date. All provisions of this section shall become effective upon official declaration of the vote hereon by proclamation of the governor pursuant to section 1(4) of Article V.