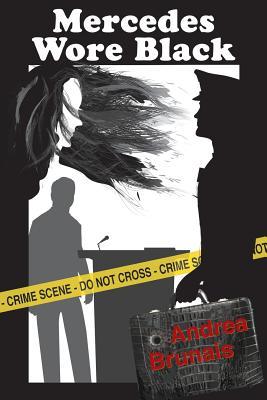 Andrea Brunais is a highly decorated former investigative reporter in Florida. Her new novel, Mercedes Wore Black, reflects her knowledge of Florida politics,investigative journalism, and the changing media climate for reporters who want to write – and writers who want to report.  It’s an interesting book, always lively, at times funny, at times deeply troubling, at times a little frustrating.

Like the Florida politics it depicts with pointed insight, it’s kind of a hot mess.

The novel concerns an investigative journalist, Janis Hawk, who is fired by her newspaper – seemingly as part of the wholesale downsizing of newspapers that goes on apace – but Hawk’s firing has, as one would guess from the introduction, political motives. She’s been stepping on the toes of the rich and powerful: developers who want to ruin delicate sea grass beds to gouge out a deep water docking area at a port only a few miles from plenty of deep water anchorage; an unscrupulous gaming management company trying to take over the Florida lottery business; and, of course, politicians whose greed, lust, and general smarminess they would prefer not to have discussed in public.
Luckily – for both Hawk and the plot – Janis has a wealthy and powerful 2nd wave feminist mentor and friend who puts her into business as a journalist blogger which allows Hawk to continue her investigative reporting. This brings her into contact with both friends (the Mercedes of the title, for example, is an old college friend working for the gubernatorial campaign of a maverick politician with high ideals) and enemies (see above).  From those connections, as the old saw goes, things get interesting.

Hawk, through her friend Mercedes and her investigative reporting, meets Brad McIntyre, the idealistic gubernatorial candidate her friend Mercedes worked for. Note that past tense – Mercedes, whom we don’t know as well as we might (or perhaps should) is murdered, the event that really kicks the novel into gear. Hawk’s connection with McIntyre gains her access to high powered scenarios (lavish parties where rich lobbyists court powerful politicians: object, perversion of government policy to suit special interests; political rallies and stunts that give the “common people” – think the 99% – a chance to make their political will known) that both give her information to expose, to use a term popularized by a non-Floridian Bush, “evil-doers,” and put her in harm’s way at the hands of those in the hire of the rich corporate interests whose plans her exposés might thwart. Eventually, she and McIntyre (and, in a way, the ghost of Mercedes) create a scenario that forces the hand of the bad guys – and almost gets them both killed. But, as in any satisfying thriller, good triumphs over evil – well, good triumphs as much as it can in the sordid environment of politics and government. That’s perhaps the best thing about Mercedes Wore Black – even though the bad guys get their just desserts this time, the main characters are realistic that only a battle, not the war, against the misuse of political power has been won.

As my note about Mercedes above indicates, however, there are some problematic elements to Mercedes Wore Black. The novel seems unable to decide what it wants to be – a political thriller with a romantic “under-story” or a romance set against a background of political suspense and intrigue. Maybe that doesn’t matter in the long run, but I suspect readers leaning toward a definitive romance story line ending will be slightly disappointed. Still, the detail and the accuracy of Brunais’s depiction of Florida politics and its sleazy underbelly will more than satisfy any reader and the ambiguous ending to the budding romance between Janis Hawk and Brad McIntyre leaves the door open to – what else? – a sequel. And we all know I get a little cranky about the whole sequel phenomenon currently sweeping through literature. So, as Janis Hawk might say, consider the source.

One other minor, possibly idiosyncratic, quibble. Janis Hawk and her friends talk a lot about what people are wearing, and the author notes outfits – particularly women’s outfits – in what will be for some readers (including this whiny reviewer) excruciating detail. Maybe what characters have on is important, I don’t know – she is writing about politics where image trumps substance 103% of the time. But I found the fashion designer name dropping at times slowed the narrative unnecessarily. I must admit, though, that I found the scene when Janis throws a glass of red wine at her ex-husband – and it ends up instead all over the expensive designer gown (white, of course) of her former employer’s wife in what turns out in the end to be an apt application of the Scarlet Letter – mighty vicariously satisfying.

Whether a reader finds Mercedes Wore Black a romantic political thriller or political thriller romance, it’s one of those books that does what the best examples of genre literature do – it teaches you a lot without your even knowing it. For that reason alone, it’s worth your time. Go here to give it a try. Despite yourself, you’ll learn something.