My lot in life: teaching sophomores how to report and write

Like Mom’s admonition to ‘eat your spinach,’ my sophomores should dine on basics

This week I will teach my sophomores how to write a useful sentence.

A car hit a pickup today at Smith and Wesson streets, injuring both drivers.

I will tell these tablet-toting, smartphone-lugging students that this is perhaps the most efficient sentence structure in journalism.

Then I will conduct a mock press conference in which I play the roles of police accident investigator, hospital spokeswoman, and witnesses. (Incidentally, I get killed in the accident, bringing great joy to my sophomores past and present.)

I will do this repeatedly for the semester. Mock press conferences. Subject-Verb-Object Comma Verbal Phrase. Over and over.

And you’re thinking: Yo, Doc. It’s the digital age. What’s with the horse-and-buggy approach to writing news?

I do this because these kids will work in an epoch in which print no longer exists. A change in principal medium of transmission, however, does not alter the need for clarity, economy, brevity, and humanity.* I do this because the belief in “get it right” first is succumbing to “tweet it now; verify it later.”

I do it because the digital era demands competence in “write to fit” more so than in eras past. Despite the presumedly infinite space on the Web for long-form journalism, editors and owners place a premium on speed. “Tweet it first” is the dictum: a catchy 140 characters, hopefully laced with conflict, someone’s incompetence, or a touch of the salacious. The need for speed predicates brevity. Then a 200-word story. Slap a short, taut hed on it, mindful of SEO opportunities. 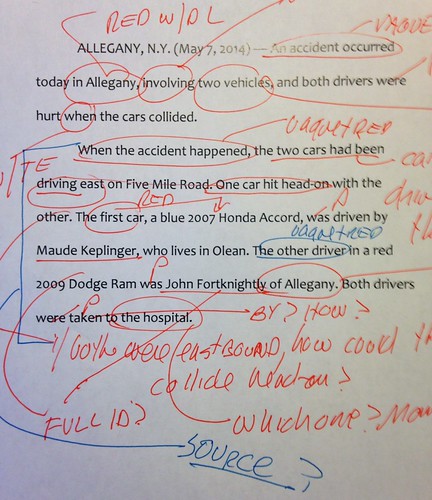 So I teach my sophomores Subject-Verb-Object, Verbal Phrase. I show them that this structure, in the high-speed, write-to-fit world they will eventually enter, can do all three imperatives: it can serve as a 20-ish-word lede, be trimmed to its six- or seven-word essence for the hed, and leave room of hashtags and a bit.ly link in the tweet.

I do this over and over. Like most coaches, I believe in repetition as the grounding of competence.

I do this over and over in mock press conferences in which I am the source of all information. Why, you ask?

If there is a moral imperative in today’s journalism that has been tossed under the digital bus, it’s accuracy. In the spring semester, my sophomores will work independently and develop their own stories. But that’s a different set of skills. They must acquire basics — the foundations of competent reporting and writing — now.

Because I am the font of all data for their stories, I can tell when they don’t get it right. I can tell when they’re not asking questions well and teach them to do it better. If I give them my mock name and they don’t ask me how to spell it, I’ll fail their sorry asses if they write “John Doe” instead of “Jon Dough.”

Mastering basics matters. They need competence and faith in fundamental skills — the abilities to observe, record, analyze, organize, and present. They need a baseline they can depend on, a baseline that can be altered and realigned when I teach them blogging and opinion writing as juniors and seniors. They need to feel comfort and confidence in their face-to-face interviews with recalcitrant sources (even if the interviews are conducted via FaceTime or Skype).

So I will pound the basics into them for 15 weeks. They will tire of it. Too bad. They will wonder why they chose to major in journalism. They will revisit the dictionary to review the definition of “sadist.” They will grumble and wonder, “Why aren’t we doing cool stuff?”

So I will tell them they are doing the cool stuff because what I teach enables them to do so much more in future courses — and life — to come.

Rachel (George) Axon took this course from me in 2003. Six years ago, well into her second job, she sent me this:

The job I do now barely resembles the one I took out of college two years ago. All I had to worry about then was writing a couple features and notebooks each week and covering a few games. Now, I am responsible for 31 Web pages, producing high school sports videos each week (shooting, editing and hosting, in some cases), blogging and writing stories for the Web site. Truthfully, I blog about my beat more than my byline appears on our Web site. It is not the job I thought I would have, but that’s OK. My storytelling and reporting skills are still the basis for all that I do. [emphasis added]

Rachel is now a national sports investigative reporter for USA Today. She has earned a half-dozen national awards for her work. She is only eight years out of college. Rachel wisely continued to hone her skills in courses that follow mine — just as my sophomores should build on what they learned in freshman courses taught by my talented colleagues.

If my sophomores complain about the content of this course, I will point to Rachel and so many others who understood immediately the need for mastering the basics of reporting and writing.

Most of my sophomores have no intention of becoming journalists. They want to do public relations, advertising, or social media something or other.

They’ll ask: “Why do I need this stuff you’re teaching?”

I will likely sigh heavily. “Because in all those occupations, you need to gather information, organize it, figure out what it means, and tell others about it.”

Some will understand. Others won’t. I will just continue to cook the spinach and serve it up. The decision to eat it remains with them.

*h/t to William Zinsser in “On Writing Well.”

• image of news copy by the author.
• spinach image used according to Creative Commons Attribution License 2.0.