John McPhee and Immersion Journalism: The Survival of the Bark Canoe 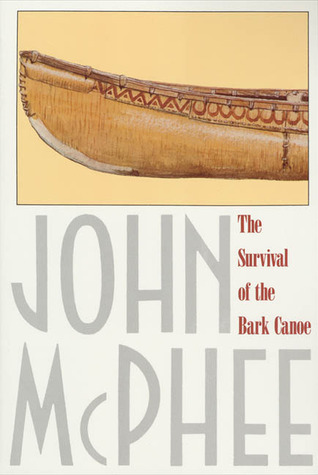 Here’s one from the 2014 reading list that I’ve been looking forward to reading. I have been a John McPhee fan since I was an undergraduate. My composition class “reader” had an excerpt from Oranges about fighting a frost in Florida with smudge pots that hooked me on his approach to nonfiction.  (Some of the more hoary of you working through this piece may remember those books called readers. They were books of essays by great nonfiction writers assigned in 1st year composition classes to provide “writing models” to callow 18 years olds in the quaintly delusional hope that some of the greatness of an E.B. White, Lewis Thomas or John McPhee would enter our heads and come out through our pens back in those halcyon days when we rode dinosaurs to classes.)  The use of these has been widely discontinued – an act, I suspect, owing as much to the despair writing teachers feel of ever encountering a writer who could, to borrow a metaphor from Rogers Hornsby, at least “carry the bat” of a White or Thomas – or McPhee – as to changes in the pedagogical approach to teaching writing.

The Survival of the Bark Canoe is a brief book, only 114 pages. That is often the case with McPhee; he does not write long pieces because he actually writes pieces suitable for inclusion in magazines. The magazine he is most closely associated with is the same one that E. B. White and his contemporary James Thurber helped make famous: The New Yorker.  Given that magazine’s history for stellar writing – and occasionally writing that manages to be pompous and precious at once – one can easily jump to the conclusion that McPhee has that ironic, wittily condescending style many associate with the nation’s premier “high brow” mass market magazine (though these folks might disagree with that assessment). Nothing could be further from the truth – and therein lies McPhee’s greatness. His ability to immerse himself in the stories he explores and bring to life their characters draws readers along as if they were reading fiction.

Those familiar with McPhee’s other books know that he is fascinated by nature. Oranges, mentioned above, concerns the industry that has grown up around that fruit. Basin and Range, perhaps his most famous work, is an examination of the geology and topography of the West that explores not just the West’s geological past, but its recent past and how the American drive to “develop” has affected that delicate landscape. A personal favorite of mine, The Control of Nature, is composed of three long essays, all on the theme offered in the book’s title: McPhee looks at Iceland’s and Hawaii’s attempts to control volcanic activity; the efforts of the  U.S. Army Corps of Engineers to control the Mississippi/Atchafalaya delta to preserve New Orleans; and the attempts of Californians to live with the ever shifting San Gabriel Mountains and the debris flows that result from heavy rains there.  In each case McPhee goes to sources – not only engineers, geologists, volcanologists; McPhee closely observes and interviews ordinary citizens affected – and helps us know the people involved as people striving against powerful forces and reacting in humanly predictable – and sometimes unpredictable – ways. We can only hope that he will live long enough (he’s 83) – and find an approach that suits his unique style –  to do a book on global warming and the responses to its challenges.

The Survival of the Bark Canoe is a much smaller book in scope than any of those mentioned above. It concerns an artisan, one Henri Vaillancourt of New Hampshire, who makes birch bark canoes in the same way that Native American tribes did for centuries. Two interesting things emerge concerning Vaillancourt almost immediately: he has become a master builder of canoes very early (at the time of the book’s original publication in 1975, Vaillancourt was only 25 and the events recounted in the book occurred a couple of years earlier; Vaillancourt is so single -minded that, as McPhee correctly predicts, building birch bark canoes in the style of the Malecite tribe has been his life’s work.

The book divides easily into two sections. The shorter first section allows McPhee to walk us through Vaillancourt’s building process and introduce us to the brilliant if quirky craftsman. The second, longer section concerns a canoe trip through Maine’s North Woods that McPhee and a friend take with Vaillancourt and a couple of his pals. This longer section, the canoe journey, reveals much. It shows us that Vaillancourt, while a brilliant artisan, is not a particularly good outdoorsman or canoeist. It also allows McPhee to compare this canoe trip to the one that Henry David Thoreau took through the same wilderness in 1853. Thoreau’s plea for preservation of the wilderness in The Maine Woods fell on deaf ears and everywhere the men travel they see evidences of what the logging industry did to the North Woods before they were finally protected. In following much of Thoreau’s trek, the group is able to understand both his appreciation of the wilderness and see how the logging he so feared and despised changed the woods.

Another thing that emerges is that Vaillancourt, who asserts himself, often unnecessarily and arbitrarily, as group leader on the canoe trip comes off as sublimely human. He has genius as a canoe builder, but as a woodsman he is both hapless and inexperienced. Like many who, through both talent and effort, achieve highly in one area, his success makes him both overconfident and obstinate even when confronted by superior knowledge such as McPhee and his friend Warren Elmer, both much older and much more experienced wilderness travelers, possess.  Vaillancourt’s decisions have the effect of making the trip both fascinating and at times miserable for the others. Still, when the canoes sustain damage or when his friend needs a better device for carrying his canoe on a long portage, Vaillancourt proves himself both resourceful and thoughtful. He is, as we all are, a mixture of admirable and problematic talents and qualities.

Throughout the trip the group has spent hours pursuing side streams along Maine’s northern lakes hoping to see a moose the symbol of wild Maine. It is fittingly ironic that it is only on their way home that they see a bull moose gallop up the road past them – chased by a lumber truck, another symbol, a symbol of the exploitation of the very place they have just visited and that reminds the group of the fragile nature of the wild woods that have both offered them the chance for journeys such as they have made – and provided the vehicles they have used for that journey.

As Henri Vaillancourt says to McPhee as a sort of farewell, “Thanks for taking care of the canoe.” As McPhee tells us in The Survival of the Bark Canoe, it is those like Thoreau and Vaillancourt, both contrarians, both lovers of nature, both men with genius, who remind us that only we can save nature – and ourselves.